7 Murderesses Who Expressed Their Preference for All-Male Juries 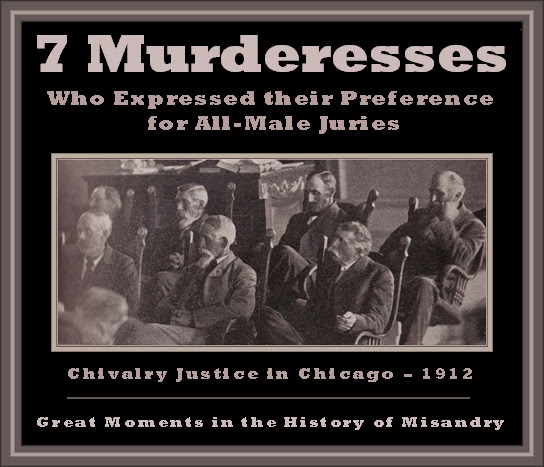 • Mrs. Louise Vermilya, accused of poisoning nine persons: “I do not believe a jury of women would do me justice. I should insist on being tried by men.”

• Mrs. Antonio Musso, charged with killing her husband: “I was ill treated and abused, yet a jury of women would feel sorry only for my husband. Women are too emotional and sentimental to act as jurors in grave cases.”

• Mrs. Harriet Burnham, charged with shooting her husband to death: “Women are spiteful. They would show no mercy to a woman. They would take pleasure in convicting me.”

• Mrs. Louise Lindloff, indicted for seven deaths by poison: “I want justice and women have been pretty successful in getting justice from juries composed of men. I want no women to sit on the jury that tries me.”

• Lulu Blackwell, charged with killing Charles Vaughn: “It would be foolish to consent to have a jury of women try me. I want man’s jury to sit on my case.”

• Margaret McCabe, charged with killing Edward Lee: “No women for me. If the State’s Attorney wants women juries, that is reason enough why I should not want them.”

• Elizabeth Buchanan, charged with the killing of Josephine Rice: “I would never consent to be tried by women, I should say not. I feel that I could only get justice from men.”