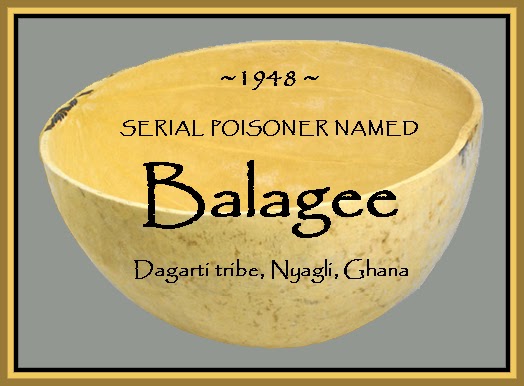 Zakariah Ali’s self-published memoir (2012) tells of the murder of his mother in a small village near the Gold Coast of Africa by a serial poisoner, an old woman named Balagee.

The author was only four when after his mother’s death the Dagarti villagers in what presently is independent Ghana, according to judicial custom found her guilty of the one murder and seriously suspected her of having years before murdered her husband and children (and very likely others) and then banished her from their village, Nyagli.

Balagee had poisoned the little boy’s mother over a minor slight. The death potion was delivered in a calabash pot of flavored water that the killer made sure would not be tasted by any other person. It was a slow and agonizing death.

In his memoir Zakariah explains that Balagee “had an uncanny knowledge of poisons and the ability to target to poison her victims without affecting unintended targets to cause mass casualties and arousing suspicions about her role in the event of any casualty or havoc.” While her victims was still alive, the poisoner confessed to the crime but also admitted that despite her renowned knowledge of poisons she had no knowledge of antidotes.

Zakariah Ali asks “how many people had she poisoned in the past?” and he answer with “nobody will ever know.”