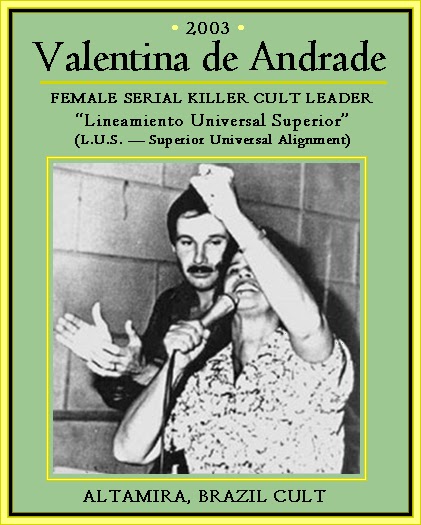 Valentina de Andrade was never convicted, yet a number of her followers were convicted of serial murder and mutilation of children, crimes committed in accordance with the teachings of the leader of their cult.

FULL TEXT (Article 1 of 3): Valentina de Andrade received her gift of prophecy in 1981. Her neighbors found her talents of clairvoyance and fortune telling remarkable, and she became a trusted seer in the backwater Amazonian town of Altamira. She was also the leader of “Lineamiento Universal Superior” (L.U.S. — Superior Universal Alignment), a group that believed that the end of the world would come in 1986, with extraterrestrial space ships saving only the sect’s followers.

Valentina’s preaching started in 1981 after having received extraterrestrial messages through divine cosmic beings. Valentina embarked upon her mission to spread the information she had received. Her teachings were to be found in her book God, The Big Farce, claiming that God does not exist, that Jesus is an extraterrestrial, and she assumes the mantle of a lofty cosmic entity of “light, love and truth”, which had become incarnate on Earth to perform a mission.

A central pillar to the beliefs of Superior Universal Alignment is that children born after 1981 are a reincarnation of evil and must be expunged. To become a member, one must abandon one’s children and only the true adherents were to avoid the pending destruction of the earth by escaping in a spacecraft.

As with many “apocalypse cults” of the past, the coming and going of the date for the end of the earth left many followers unsettled. Certain core members believed that maybe they had not lived the word to its fullest, that they had proven themselves unworthy. In 1989 the children in and around Altamira started going missing.

19 children disappeared and 5 corpses were found between 1989 and 1993. The children were boys between the ages of 8 and 13, tortured, raped and stabbed to death. The bodies had been mutilated with genitals and vital organs removed. The region was in a panic and the police initiated seven separate investigations. Though several of the children were indigent, making a living as “shoe shine boys” in the town center, the police couldn’t seem to make a connection and the probes went nowhere.

The break came with the escape of 9 year old Wandiclei Pinheiro. Indentifying his captors as influential members of society (the son of a very wealthy local land baron, two physicians, a policeman as well as Valentina herself) the truth sent shockwaves through southern Brazil. The story that unfolded painted a picture of ritualistic human sacrifice and cannibalization with the doctors removing the organs to sell on the black market.

Four of the men were arrested immediately. Valentina escaped custody by fleeing the country. She remained highly mobile for the next decade, spending time in Argentina, Uruguay and at one point even Las Vegas.

The five were eventually collected and put on trial in 2003. Though the other four were convicted and given life sentences, de Andrade once again escaped due to an alibi which placed her out of the area when the murders were committed.

Valentina de Andrade, now 82 [in 2009], continues to live and preach among her flock in Buenos Aires, Argentina. 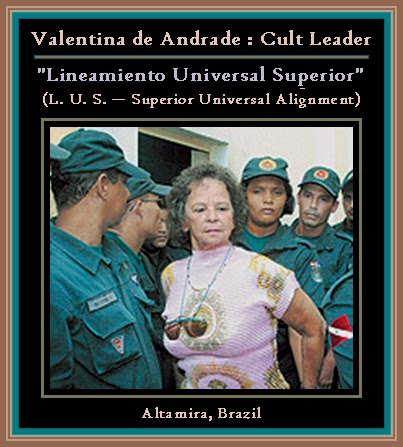 FULL TEXT (Article 2 of 3): Brasilia, Brazil (Reuters) – A Brazilian sect leader and five others accused of kidnapping boys in a remote Amazon town, cutting off their genitals and sacrificially killing them has gone on trial.

The trial, which comes 11 years after the police investigation began, will be a test of Brazil’s ability to bring justice to isolated areas where the legal system may be under the sway of powerful locals.

“This is a very important case, even if it comes 11 years afterward,” the government’s Human Rights Secretary Nilmario Miranda told Reuters on Wednesday from the court house in the northeastern town of Belem. “We have to celebrate the fact that there is a trial.”

Valentina de Andrade, the suspected leader of a sect known as Superior Universal Alignment, two doctors, two security guards and the son of a businessman in the town of Altamira are charged with murder, attempted murder and torture.

They are accused of attacking five boys, three of whom died and two of whom were mutilated but escaped. The two surviving boys are expected to testify at the trial.

According to the families of the victims, Andrade is said to have been contacted by a medium who told her that boys born after 1981 were possessed by the devil.

A group representing the families says there were many more victims — 19 poor young boys in total aged between 8 and 13 who were horribly tortured or killed between 1989 and 1993. Some had eyes gouged out, wrists slit and sexual organs cut out.

Of the 19 victims, six died, five were never found and the rest escaped, some after being drugged, bound and mutilated.

Legal experts helping the victims’ families have worked for years to bring the suspects to trial. Police dropped many of the cases because of lack of evidence or incompetence, according to Flavio Pachalski, a spokesman for the families.

Saying justice could not be done in remote Altamira, the defence pushed to move the trial to Para state capital Belem, which was granted earlier this year. The trial could go on for weeks.

FULL TEXT (Article 3 of 3): Rio De Janeiro, Brazil, (Reuters) – A Brazilian court on Friday acquitted the alleged leader of a Satanic sect of the ritual mutilation and killing of boys in a remote Amazon town, officials said.

The decision, by a 6 to 1 jury vote at the end of a 17-days trial in Belem, Para state, caused tumult in the packed courtroom with tears and protests from the victims’ families.

“Valentina de Andrade is acquitted of the charges,” said judge Ronaldo Valle. Andrade, 72, fainted after the judgment and received medical treatment in court.

Andrade’s defense lawyers made no comment but the prosecution said it would appeal against the court’s decision.

Andrade was accused of the murder of three boys and castration of two others in Altamira, 200 kms (125 miles) from Beleme, between 1989 and 1993. She was said to have led the crimes of a sect known as Superior Universal Alignment.

Defense lawyer Arnaldo Busato Filho presented the court documents, including one from Parana state police in southern Brazil, showing that Andrade wasn’t in Altamira when the crimes were committed.

Prosecution evidence in the case included a video of Andrade’s husband receiving a gun as a gift. “It has bullets of gold to kill little vampires,” Andrade was heard saying.

A group representing the victims says Andrade believes she was contacted by a medium who told her boys born after 1981 were possessed by the devil.

Four other defendants have already been sentenced in the case, which started in August, for prison terms of 35 to 77 years. They included two doctors who were involved in the removal of the genitals of several of the boys.

The four are all appealing against their sentences.

The victims’ families say there were 19 victims in all — boys aged between 8 and 13 who were kidnapped, tortured or killed in Altamira. Not all the boys cases were brought to trial this time because of insufficient evidence. 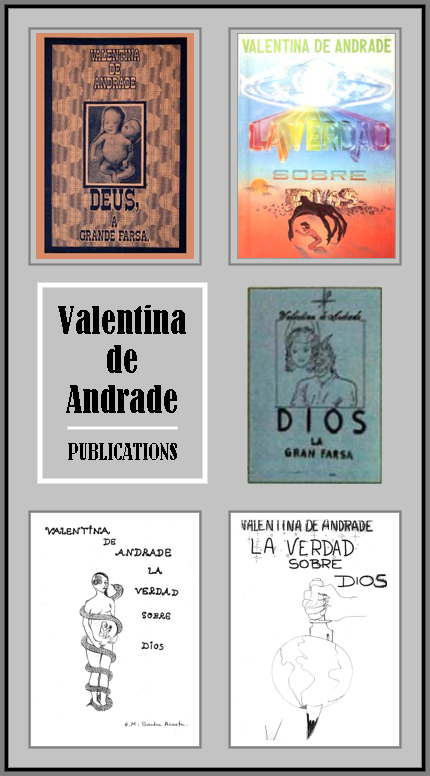 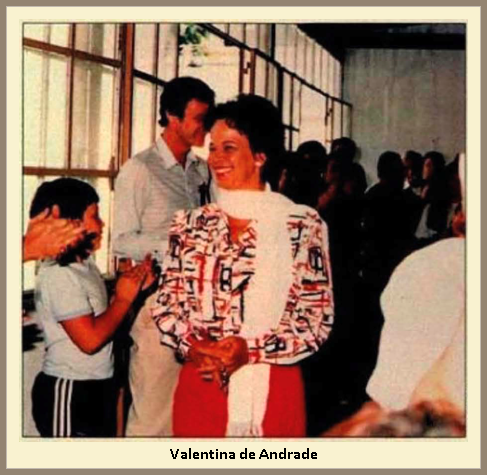 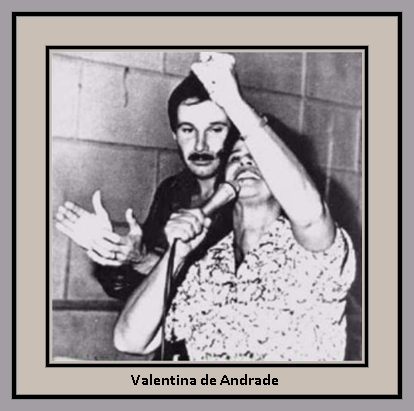 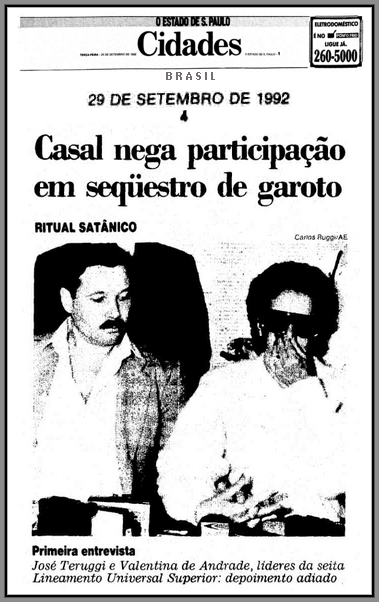 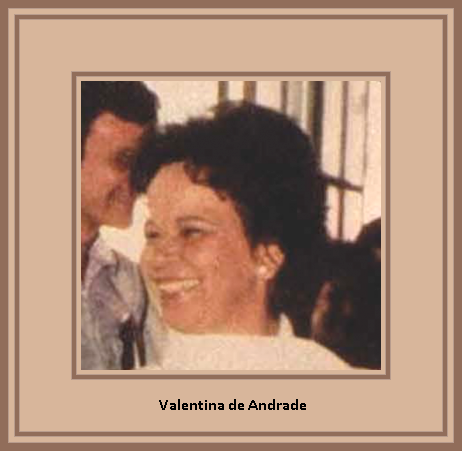 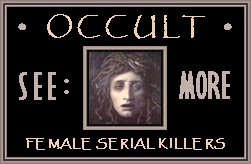