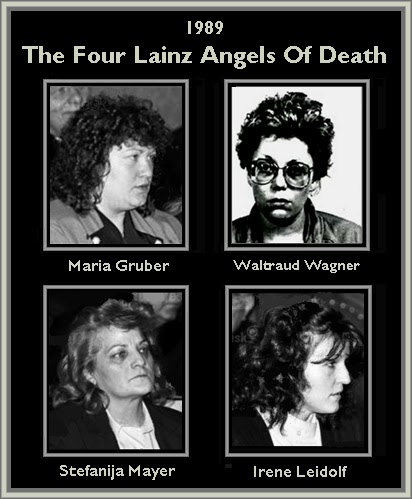 Wikipedia – Lainz Angels of Death: Maria Gruber, Irene Leidolf, Stephanija Mayer, and Waltraud Wagner made up one of the most unusual crime teams in 20th Century Europe. The four Austrian women were nurse's aides at Lainz General Hospital in Vienna who murdered scores of patients between 1983 and 1989. The group killed their victims with overdoses of morphine or by forcing water into the lungs. By 2008, all four of the aides had been released from prison.

Wagner, 23, was the first to kill a patient with an overdose of morphine in 1983. She discovered in the process that she enjoyed playing God and holding the power of life and death in her hands. She recruited Gruber, 19, and Leidolf, 21, and eventually the "house mother" of the group, 43-year-old Stephanija Meyer. Soon they had invented their own murder method: while one held the victim's head and pinched their nose, another would pour water into the victim's mouth until they drowned in their bed. Since elderly patients frequently had fluid in their lungs, it was an unprovable crime. The group killed patients who were feeble, but many were not terminally ill.

Investigators criticized the hospital for meeting them with "a wall of silence" as they attempted to look into a suspicious 1988 death. The aides were caught after a doctor overheard them bragging about their latest murder at a local tavern. In total, they confessed to 49 murders over six years, but may have been responsible for as many as 200. In 1991, Wagner was convicted of 15 murders, 17 attempts, and two counts of assault. She was sentenced to life in prison. Leidolf received a life sentence as well, on conviction of five murders, while Mayer and Gruber received 20 years and 15 years respectively for manslaughter and attempted murder charges.

In 2008, the Justice Ministry in Austria announced that it would release Wagner and Leidolf from prison due to good behavior. Mayer and Gruber had been released several years earlier and had assumed new identities.


In custody, the “death angels” confessed to forty-nine specific murders. Wagner allegedly claiming thirty-nine on her own. “The ones who got on my nerves,” she explained, “were dispatched directly to a free bed with the good Lord.” It was not always simple, she allowed: “Of course the patients resisted, but we were stronger. We could decide whether these old fogies lived or died. Their ticket to God was long overdue in any case.” [Michael Newton, Bad Girls Do It!: An Encyclopedia of Female Murderers, Loompanics Unlimited, 1993,  pp. 8-9] 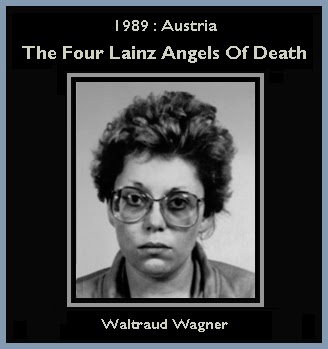 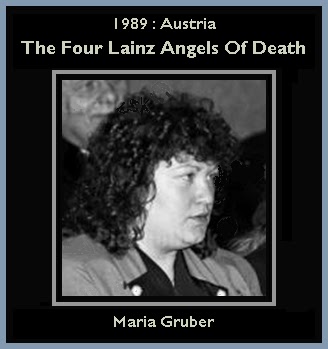 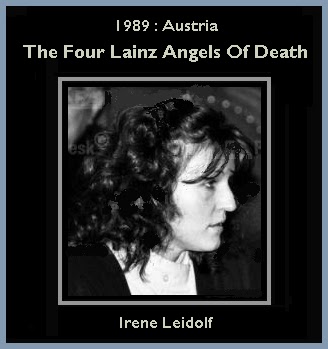 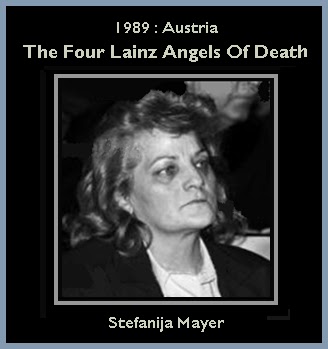