The Badger Game in Minneapolis - 1885 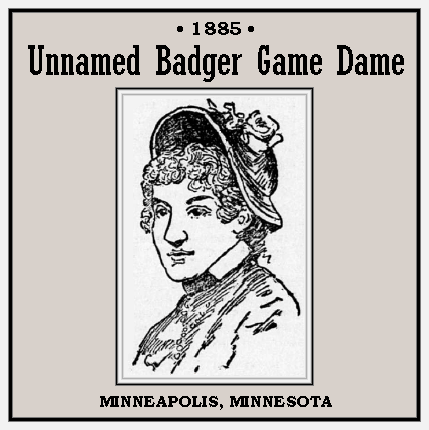 FULL TEXT: In this day of scandals, strange divorce suits and other social cyclones, it would be altogether unusual and unexpected if the female blackmailer and not come to the surface. That her presence has not been more extensively heralded is due to the discretion of her victims who, have not cried when the pressure upon their purses was brought to bear, and have been content to allow themselves to be bled in silence. About two weeks ago a prominent manufacturing firm of Minneapolis discovered that the bank account of one of the partners had been overdrawn. Explanations followed, and the partner showed conclusively that he had been induced to give up $500 “hush money” to mollify a female charmer who threatened to blast his social reputation unless her demands were complied with. It was the old story – a short acquaintance, which had followed upon the heels of a preliminary flirtation. A few notes of a tender nature had passed between them, presents of flowers and jewelry had been lavished; then a few clandestine meetings, and finally, to cut the story short, the denouement. The injured husband (?) unexpectedly appears. In fact, doesn’t take the trouble to knock, but kicks the door down. “Aha, madam, I have found you out. And you, villain, you shall suffer for this! I’ll teach you to steal from me my wife’s affections.”

Then comes the usual scene.

The ebbing wife prostrates herself at the feet of the man she has (to all appearances) promised at the altar to obey, love, etc. He is obdurate, and must have blood. He draws a revolver, which he flourishes with reckless abandon, and swears that the life of the vile seducer shall pay the penalty. “But it was my fault,” sobs the wife. This changes the complexion of affairs, and the second act of the drama, which has been previously rehearsed, comes on. “Then, madam, you shall be the one to suffer. To-morrow I will commence proceedings for divorce. The world shall know of your perfidy. The papers of this city shall ring with the story of your downfall. You, sir, I will brand as the invader of my home, and will make you a stench in the nostrils of all decent people. It will be useless for you to deny what I shall say, for I have witnesses to the revelations of this night, etc., etc.” This is probably the way the affair occurred, for all agree that there was nothing new or original in the modus operandi of the little scheme played by the blackmailer and her pal. The poor dupe thought it useless to kick, and arranged the matter by giving his check for $500, which, when cashed, overdrew his private bank account, and thus brought to the notice of his partners the little escapade.

The woman who figured in this romance, which did not have very much romance in it either, is a rather prepossessing brunette, tall and stylish. Her history, as far as Minneapolis is concerned, is somewhat interesting. She was brought to the city from Cincinnati about three years ago, by a leading young business man, who is considered quite prominent because of the honored name he has inherited rather than on account of any noticeable business ability or social graces. At the end of a year the woman hinted that she was about to become a mother, and desired a settlement. The prominent young business man possessed a wife and several children, as well as a summer residence at Minnetonka, and couldn’t very well have this thing come before the public, so he compromised by paying $4,000, the sole consideration on the part of the party of the second part being that she would maintain a discreet and very deep silence. It is, perhaps, needless to say that there was no truth in the woman’s assertions as to her maternity, but the scheme worked so successfully that within a few months another prominent business man was entangled in the meshes. This gentleman also holds his head rather high. He lives on the interest of money left him, which he has increased by a few real-estate speculations and a fortunate marriage. He was very sly about this little affaire d’amour – so devilish sly that he kept it entirely away from his intimate associates who would have probably protected him. When the “pinch” came, however, he did not give up with the desired alacrity. He had a young and pretty wife, who is not inclined to stand much nonsense, so he afterwards thought better of the matter and sent a friend to Cincinnati, where a settlement was made for $3,000. The woman is now seen almost daily on the streets, and seems to think that the climate of Minneapolis agrees with her better than that of Cincinnati. She probably has another innocent in tow by this time, and if he recognizes the cut accompanying this article he may perhaps be brought to realize what he is in for.

[“Female Blackmailer. - How Several Prominent Business Men of Minneapolis Fell Victim to Her Wiles. - The Injured-Husband Racket and Successful Threats to Make Other Hearts Ache. - A Cincinnati Siren Who Finds Minnesota Agrees With Her Financially. - A True Story Without Names, Which Carries an Unwritten Moral With It.” The St. Paul Daily Globe (Mn.), Dec. 5, 1885, p. 3] 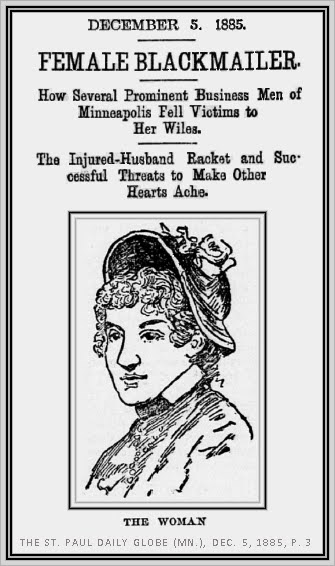 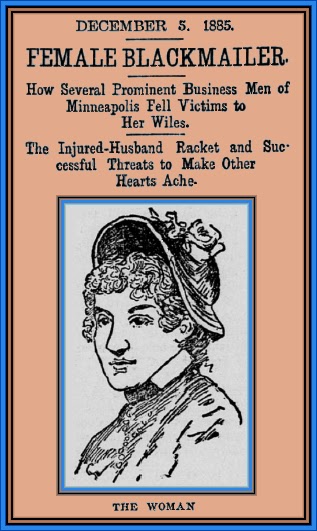