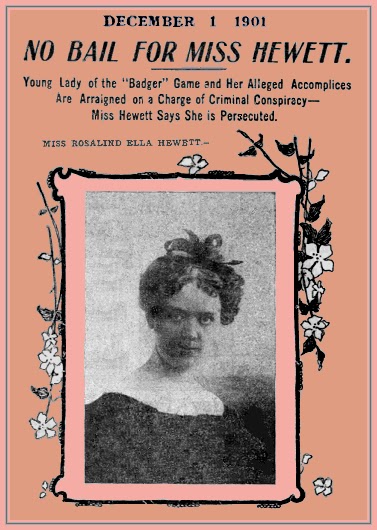 FULL TEXT (Article 1 of 2): “Criminal conspiracy” was the that confronted Miss Rosalind Ella Hewett the stenographer, all her two alleged accomplices J. F. Perry and William Lindstrom, when they appeared in police court yesterday afternoon accused of an attempt to “badger” Francis P. Finegan out of $1,000. The alleged conspirators through their attorneys demanded the statutory time in which plead and 2 o’clock Monday afternoon was set.

The story of the alleged blackmailing scheme created a sensation yesterday and many curious spectators gathered in the old court room to get a glimpse the persons involved in the scheme and hear the proceedings of the case. When the case was called the prisoners, somewhat disheveled in appearance after a night in the old city jail, arose and listened in an apparently unconcerned manner to the reading of the complaint which charged them with criminally conspiring to extort from Francis P. Finegan. Attorney Edward McGurrin, for Miss Hewett, asked that his client be granted the statutory time in which to plead and Attorney D. S. Truman, for the two young men asked the same privilege. The defendants were granted until Monday at 2 p. m. and bail was fixed at $500 in default of which they were sent to the county jail.

The prisoners had little to say about the case yesterday, but expressed themselves as confident that when the matter was thoroughly aired they would be found to be the injured parties. Finegan, on the other hand, declared his belief to the police yesterday that the alleged conspirators had an even darker behind the one which was foiled.

“If they had gotten my check said Finegan they wouldn’t have dared and got away and it looks to me as if they must have intended to dispose of me in some way after forcing me to write the check.”

The case, according to the statement of the officers looks very dark for the accused. Yesterday Mrs. Anna Oakley, the proprietor of the rooming house, added further evidence to Finegan’s side of the case by declaring when she heard Finegan calling for help she went to the door of the room and found it locked. She said demanded entrance and that the girl and her companions refused to open the door until an officer appeared.

Miss Hewett when seen in the county jail declared that she was being persecuted for trying to protect herself. She felt sure justice would finally triumph and she expected some of her friends to furnish bail for her in a day or two.

It was learned yesterday that Miss Hewett formerly lived at Chicago and that she has a father living there now who is a contractor. It is said she always bore the highest reputation in that city.

Both young men so far as known by their employers here have always borne good reputations.

[“No Bail For Miss Hewett - Young Lady of the Badger Game and Her Alleged Accomplices Are Arraigned on a Charge of Criminal Conspiracy - Miss Hewett Says She is Persecuted.” The Salt Lake Herald (Ut.), Dec. 1, 1901, p. 7] 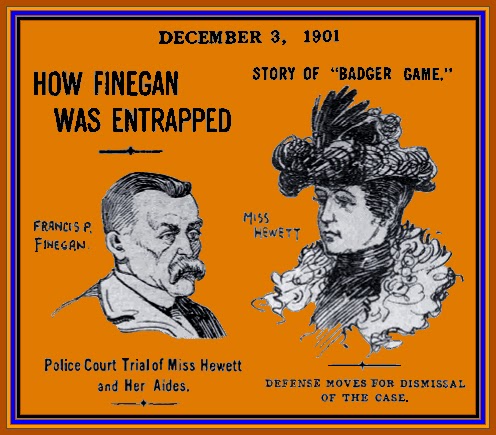 FULL TEXT (Article 2 of 2): Behind closed doors the prosecution in the case of Mrs. Rosalind E. Hewett, L. F Terry William Lindstrom, charged with criminally conspiring to extort $1,000 from Francis P. Finegan, presented its side of the case yesterday to Judge Diehl, and now the dismissal or continuance of the case depends upon the answer of Judge to a motion on the part of the defense for a dismissal. The motion is based on the ground that the prosecution failed prove the allegations in its complaint and the on the motion will be given at 10 o’clock this morning.

The court room was packed to its utmost capacity when the case was called for trial yesterday afternoon but the crowd was disappointed in its expectation of hearing some racy by a motion from Assistant County Attorney Looft Barrow that the room he cleared of all save those directly interested in the case The three prisoners listened with eager attention to the testimony brought out but they no excitement or nervousness until Attorney Truman for the boys started his argument when Miss Hewett broke down with sobs.

Mr. Finegan, the complaining witness, took the stand first and told his story of the affair in such a manner that the attorneys for the defense were unable to entangle him. After stating the matters which led up to his appointment with Miss Hewett in her room Friday night, as has already been set forth in The Herald, the witness said:

“I went to her room and found her there. She asked me to remove my overcoat and coat, and then she sat on my knee. I was standing looking at a picture when Perry suddenly rushed out from behind the folding bed and shouted, ‘Aha, I’ve got you now, you villain. You came here to ruin this girl. It is such men as you that are making and filling Commercial street, and you’ll have to pay for this dearly.’”

~ Signaled to a Confederate. ~

“Miss Hewitt then tapped on the heating pipe and Lindstrom, with a pistol in his hand, rushed into the room shouting, ‘I heard what you said, and this will look nice in print for the local agent of the Diebold Safe company won’t it? You couldn’t afford to have this come out for $500.’ Them Miss Hewitt said, ‘A thousand dollars wouldn’t repay me for the insults I received from this man. A thousand dollars wouldn’t settle it.’”

Hewitt, the witness testified, had in the meantime locked the door and put the key in her pocket. “Then,” said the witness, “Perry asked me where the money was I was going to give the girl, and when I showed him $5 he demanded to know if that was all I had, and pointing to my diamond, demanded to know what about that. Lindstrom said that was imitated and they wanted to know if $5 was all the money I had. I told them that I had $20 in the bank, and I offered to write a check for that amount and cash it for them, but Lindstrom said. ‘No, you don’t get out of here, ‘ and Miss Hewett said, ‘Where is that $1,400 you sold a lot for a few days ago?’”

Finegan then related the story of the alleged order for the bank book, and declared that Miss Hewett dictated the writing of it and then unlocked the door for Perry to go out and get the book. “I collared him,” said Finegan, “and we scuffled until the policeman came and placed them under arrest.” Upon being questioned Finegan declared that Miss Hewett took his keys to his room and trunk, and that she gave them to the officer when he appeared. He also declared that the man had tried to cover his mouth with their hands when he was calling for the police. 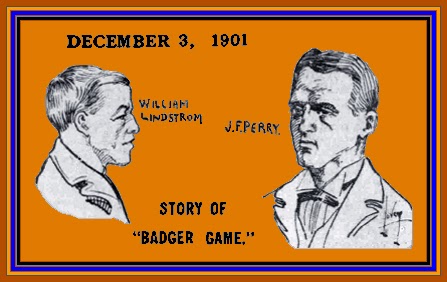 On cross-examination admitted with some reluctance that he had been married twice and that both wives had divorces from him one on grounds of desertion. “But what’s it to you?” he replied to Attorney McGurrin. He admitted that he had made the advances to Miss Hewett and had proposed the date but declared that he had been given what he considered every invitation to do so.

Officer Hilton twined that Miss Hewett had given him the keys which Finegan claimed belonged to his room and trunk and that she had admitted having dictated the order for the bank took but had declared to him that Finegan had offered to pay the money to square the thing The officer added that she had also admitted to tin she locked the door after Lindstrom He also said that the girl claimed that she had been insulted by Finegan until she couldn’t stand it any longer and put up the scheme to get rid of him.

With this evidence the prosecution closed and Attorneys Truman and Ed McGurrin for the defense moved that the complaint be dismissed on the ground that no case had been made out Mr. Truman set forth in his argument of the motion that the prosecution had failed to prove the allegation in the complaint that any threats to expose had been made by the defendants with demands for money The prosecutor argued that the evidence showed that both acts had been done and the matter was taken under consideration by the judge until today.

Miss Hewett who is out on bail returned to her rooms and the two men were taken back to jail. 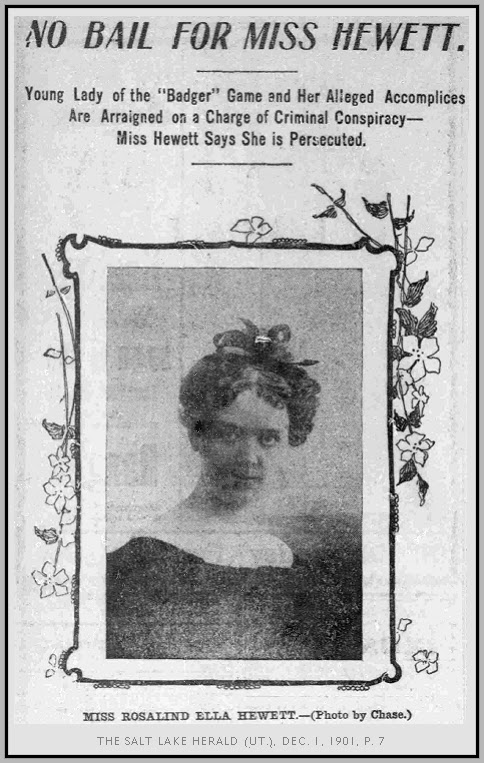 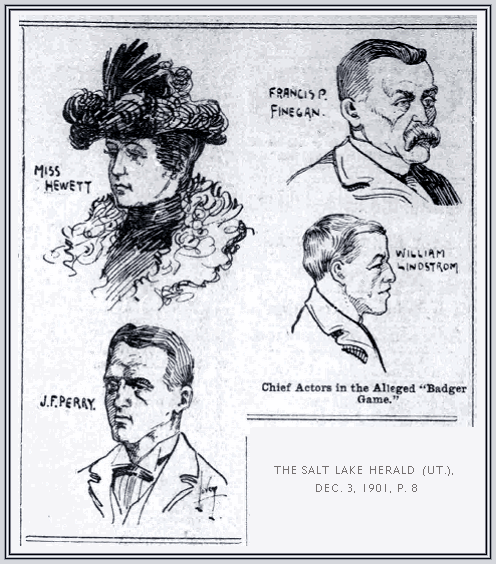