Florence Burns: “One of the boldest badger games ever attempted in this city” - 1910 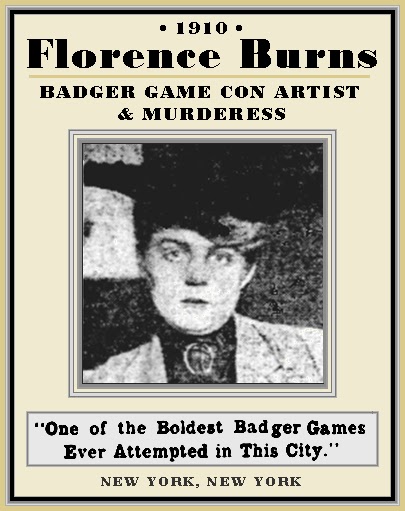 FULL TEXT: Florence Burns Wildrick, who as Florence Burns was placed under arrest but never brought to trial for the death of Walter S. Brooks, in the Glen Island Hotel in 1902, was arrested yesterday along with Edward H. Brooks, charged with what Magistrate Hurlburt characterized as “one of the boldest badger games ever attempted in this city [New York]."

Charles W. Hurlburt, a lawyer, who gave his address as No. 30 Seventh avenue, told the magistrate in the Jefferson Market police court yesterday that the woman had lured him on Sunday into a house at No. 224 West 25th street. There, he said, as he was sitting in a room with the woman. Mrs. Florence Burns Wildrick. Brooks and another man came in, each with a bottle in his hand, and forced Hurlburt, under threat of assault, to give up $57 in cash, to sign a note for $900, and to sign a declaration that he had been guilty, on various occasions, of degrading practices with the woman.

This was on Sunday night, according to Hurlburt, and he was kept in the room until 6 o’clock in the morning, after which he was taken in a taxicab all around the city and as far as Yonkers, then brought back to the city about 10 o’clock and liberated.

~ Arrested After Discharge by Court. ~

The manner of the arrest of Brooks was peculiar. He had been before Magistrate Steinert early in the afternoon, when Paul Adamson, a taxicab chauffeur, charged Brooks with being one of three men who had employed him early Monday morning for a ride up to Yonkers, and then got away without paying his bill. Brooks, who gave his occupation as real estate agent and his address as No. 224 West 25th street, admitted being one of the party in the taxicab. He offered to pay his share of Adamson’s bill and was discharged by the magistrate. Just after he left the courtroom Florence Burns Wildrick came in and inquired whether Brooks was still there. She had heard of his arrest and had come to help him out.

In the mean time Brooks had started to walk west in 12th street. It so happened that Hurlburt was in the same neighborhood, and when he met Patrolman Hewitt, of the Charles street station, in West 12th street, between Fifth and Sixth avenues. Hurlburt handed the policeman a loaded .32-calibre revolver, with the explanation that he had been carrying it for protection from the man coming up behind, who had threatened his life. Hewitt arrested both men and took them to the Jefferson Market court.

When searched, after Hurburt had made a charge of extortion. Brooks was found to have in his pocket a note for $500 payable to himself and the other  man accused, and a confession, signed by Hurlburt. admitting that he had been guilty of a degrading crime in company with Florence Burns Wildrick.

Hurlburt explained in his affidavit that he had known the woman fur about a year, and had several times kept appointments with her. She telephoned to him about noon on Sunday and asked him to meet her at 8 o’clock that evening at Broadway and 27th street. It was after the meeting that they went to the house in West 25th street, where they were interrupted by Brooks and his companion. The latter is now being sought by the police. Brooks had stated at the time. Hurlburt said, that Florence Bums Wildrick was his wife. Magistrate Steinert held Brooks in $3,000 bail for examination.

Later in the day Brooks, in the Tombs, made a statement that he was engaged to Florence Burns Wildrick, who expects to get a divorce from her husband. Charles White Wildrick. within a short time. The whole trouble between himself and Hurlburt. he said, was over Mrs. Wildrick. She was the same Florence Burns whose name had been connected with the murder of Walter S. Brooks in a downtown hotel in February, 1902, said Brooks, who added: “But that Brooks was absolutely no relation to me.”

Though Hurlburt said the woman had introduced Brooks to him two weeks ago as a friend. Brooks says he has known Hurlburt since last February, and that he had “cut out” the lawyer in her affections.

Two months ago. he said, he had found Hurlburt in an uptown resort in company with Mrs. Wildrick had had thrown him out of the room. “Would such tactics be the work of a man who wanted to blackmail another,” he asked.

Brooks denied vehemently that he had bad any hand in forcing Hurlburt to sign any papers. “When I came into the room on Sunday night.” he said. “Hurlburt came toward me, and putting his arm around my neck, confessed to me the nature of his relations with Mrs. Wildrick, and then signed the papers of his own volition.”

Brooks gave his address as No. 365 St John’s Place, Brooklyn, but maintained that he was a real estate salesman. Detectives Griffith and Finn, of Headquarters, went to the house in West 28th street and brought in the woman, who was arrested on a charge of robbery and attempted blackmail. Detective Griffith said the former Florence Burns, who at the time of the murder of Walter S. Brooks, was a striking beauty, had changed vastly for the worse. Her room, said the officer, was in a filthy condition. Her personal appearance, he added, was in keeping with her abode.

Though heavily rouged, he said, She had the appearance of one who has reached the lowest dregs of life.

Late last night the woman’s father. Frederick Burns, went to the Elizabeth street station and asked to see. His daughter. Lieutenant von Diezelsky said it was impossible for him to permit Mr. Burns to see her, except on an order from the Police Commissioner. Mr. Burns requested that the name “Burns” be eliminated from UK record.

“Enough notoriety has already been brought on the name, and I should like to be spared this additional disgrace,” the old man said.

On her way to Headquarters the woman told the detectives that Brooks was very much in love with her, and hated Hurlburt in consequence. She denied any attempt at blackmail, and said that if Brooks had ill treated Hurlburt it was to frighten him away. While she said she knew nothing of any signed confession, she said that if it was as alleged it was a true statement. In conclusion she said:

“I have been through the third degree before, and the police cannot jar me.”

Florence Burns was arrested in 1902 in connection with the murder of Walter S. Brooks, a young man of stood family, who lived in the Bedford section of Brooklyn. Magistrate Mayer and a coroner’s jury both discharged her, and she was never brought to trial. In February of this year she caused the arrest of her husband. Charles White Wildrick, for failure to pay her seven weeks’ alimony, at $5 a week, as ordered by Justice Crane when she brought suit against her husband for divorce.

Mr. Burns requested that the name “Burns” be eliminated from the record.

“Enough notoriety has already been brought on the name, and I should like to be spared the additional disgrace,” the old man said. 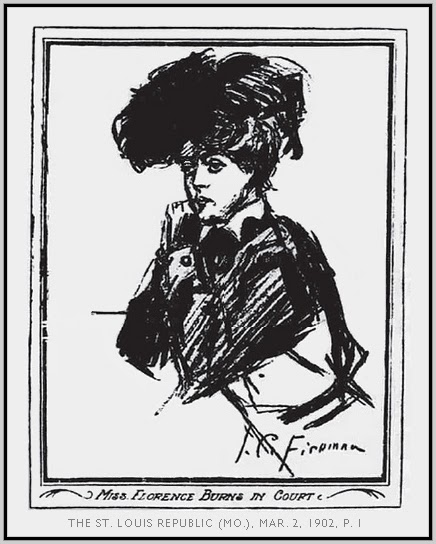 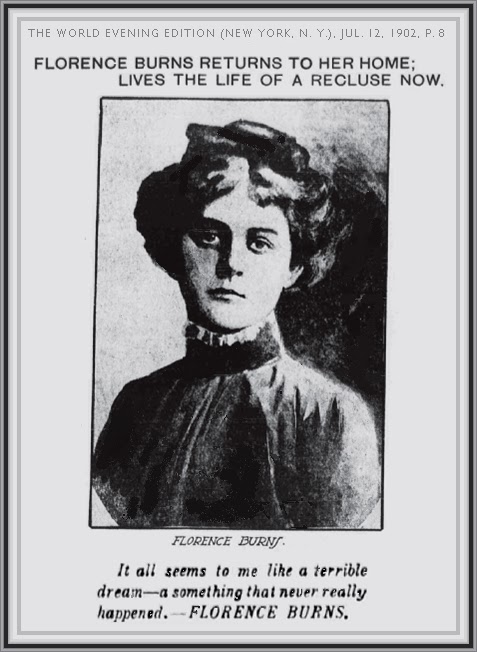