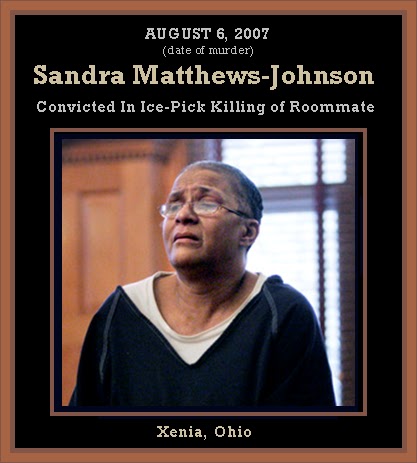 Xenia, Ohio – Ice pick murderess Sandra Matthews-Johnson called 911 on the evening of Aug. 6, 2007 to report that her victim Ottie Marie Tomlinson had fallen and injured herself. The personnel who had contact with Tomlinson that night testified that she told them that “Sandy” had stabbed her with a pen.

Initially, no one believed her because the only visible injury was a bleeding cut over Tomlinson’s left eye. But a CAT scan at Greene Memorial Hospital revealed what would eventually become the murder weapon lodged in her brain from ear to ear.

Later at Miami Valley Hospital, Tomlinson, who could not speak because she had been intubated, gave a written statement to Xenia Detectives Jeff Osburn and Fred Meadows indicating again that Matthews-Johnson was her attacker.

At the trial one witness testified that the two women had a heated argument while drinking beer hours before the alleged attack and that he heard Matthews-Johnson mutter a threat that she would kill Tomlinson.

Matthews-Johnson was convicted of aggravated murder on April 24, 2008.