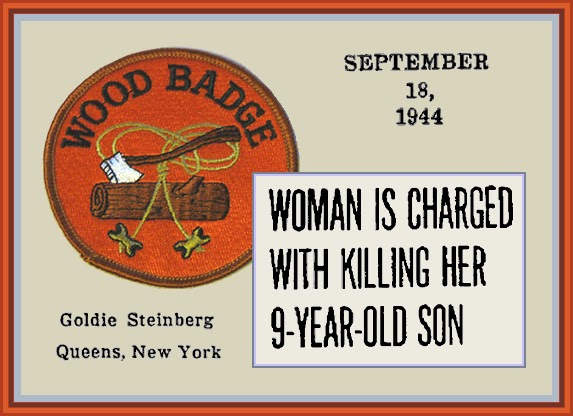 FULL TEXT: New York, Sept. 18—(UP)— Mrs. Goldie Steinberg, 31, of Jackson Heights was charged with murder today after telling police that she hit her nine-year-old illegitimate son, David, on the head with his Boy Scout axe and then  submerged his body in a bathtub full of water because he refused  to go to bed.

"The boy's body was found in the bathroom of their blood-spattered apartment after Mrs. Steinberg approached a patrolman early today and told him of the slaying.

Assistant District Attorney Edward Potter quoted Mrs. Steinberg as saying David was the son of a school teacher who had refused to marry her and that he had been a disciplinary problem and a cause of frequent quarrels between herself and her husband, Harry, whom she married two and a half years ago."

David, she said, precipitated another quarrel yesterday, after which she took him to a motion picture while her husband went to the Bronx to visit his mother.

"I returned home with David about 7:10 p. m.," Potter quoted her. "I told him to get undressed later and go to bed. He refused and I. found him fully clothed on the bed. I have an ungovernable temper and I went to a closet and took out a Boy-Scout axe which I bought for him last spring and hit him on the head with it.”

“He moaned and I was afraid he was not dead. I had half filled the bathtub to take a bath and put David, face down in the water."