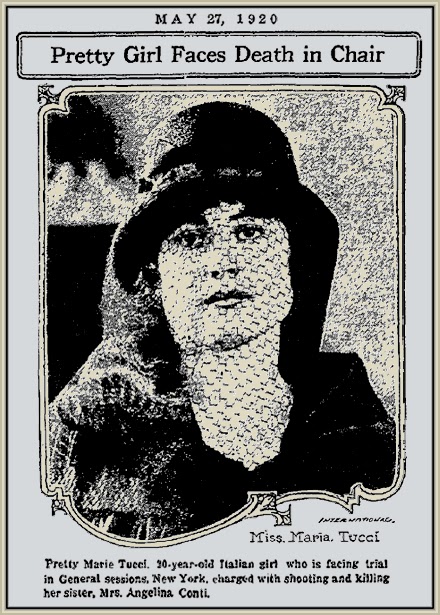 PHOTO CAPTION (Item 1 of 3): Pretty Marie Tucci. 20-year-old Italian girl who is facing trial in General sessions. New York, charged with shooting and killing her sister, Mrs. Angelina Conti. Miss Tucci pleads self defense and says her sister was trying to force her into a life of shame. Mrs. Conti’s nine-year-old daughter, Conchetina Conti, was the only witness to the shooting, and the fate of Miss Tucci will rest largely on her testimony. After the shooting Marie took the little girl with her on a flight to Atlantic City, N. J., where she eventually surrendered to the police.

FULL TEXT (Article 2 of 3): Maria Tucci, a pretty twenty-year-old Sicilian girl, charged with killing, her sister, Mrs. Angelina Conti, March 8, in the flat which they shared at 99 West Houston Street, was found guilty of manslaughter in the first degree by a jury in General Sessions at 11:10 o’clock last night. The jury was out 11 hours and 30 minutes. She will be sentenced June 7.

The courtroom was crowded when the verdict was read. Many women were present. Surrounded by court officers and supported by Miss Belle Norton, woman deputy sheriff, the girl received the verdict in silence. The women in the courtroom watched her closely, and some of them were in tears.

Miss Tucci’s reserve did not break down until she was being taken through the big door leading to the Bridge of Sighs. She then gave way completely. She sobbed hysterically on her way into the Tombs, and could walk only with assistance. Her history was recorded by Court Captain Fanning.

Conviction of manslaughter in the second degree carries with it a sentence of from ten to twenty years.

When the verdict had been read, Judge Charles C. Nott thanked the jury, saying that the verdict was justified by the evidence.

In his charge Mott cautioned the jury not to let sympathy influence the verdict. Regarding the testimony of Conchetta Conti, the nine-year-old daughter of Mrs. Angelina Conti, Judge Nott declared it alone and uncorroborated was not enough upon which to predicate a verdict of guilty.

The jury went to dinner at 7 o’clock last night and returned at 8:30 o’clock. A few minutes later a communication was sent to Judge Nott, saying that the jury wished to have read the testimony of Mr. and Mrs. Frank Fredrica, of Atlantic City. After this had been done Judge Nott, addressing the foreman, Charles S. Smith, said:

“This is a case where there should not be any disagreement if it is possible to reach a verdict. The case, so far us I can see the facts, presents no especial complexity. There is nothing about it different from any other homicide case, and if an agreement cannot be reached in this case, I see no reason why a jury should ever agree in homicide cases.

“And above all, it is only fair to this defendant that a verdict should be rendered. If innocent, she is entitled to acquittal and should not be put to the strain and stress of another trial.”

FULL TEXT (Article 3 of 3): Cambridge, Mass.; June 5. –  Maria Tucci, the twenty-two-year-old Italian girl convicted last week of manslaughter in the first degree for having shot to death her sister, Mrs. Angelina Conti, at their home, 99 West Houston Street, March 8 last, was, sentenced yesterday by Judge Charles C. Mott to from eight to fifteen years in the State Prison for Women at Auburn.

While the girl wept her lawyer, Victor J. D’Aloia, made the usual motions for a new trial, which were denied.

“I am constrained to believe that if the defendant had been a man the verdict would have been murder. Counsel has asked the court not to increase this girl’s suffering. If the court could do anything to alleviate the suffering the court would do it, but I cannot be blind to the fact that it is necessary to make an example of this defendant to show that women cannot take life any more than men can.”

The court’s remarks in imposing sentence, were translated by the interpreter to the girl, as she does not speak English. After sentence was imposed Miss Tucci was led out by two attendants and Deputy Sheriff Belle Norton. She was taken to Auburn late yesterday.