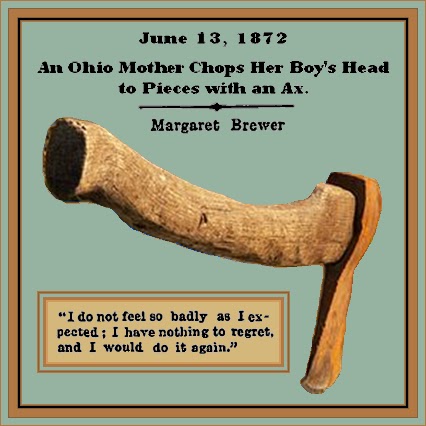 FULL TEXT: A most horrible occurrence took place about eight o’clock yesterday morning, in Rich Hill township, this County, about half way between Rix’s Mills and Chandlersville. At the point indicated is a small cabin, built of fence rails, with the openings inclosed, and roofed with rough clapboards. This place is occupied by one Aderel Brewer and family, consisting of the father, mother, two grown-up daughters, unmarried, and one or two smaller children. The eldest daughter, Margaret Brewer, some twenty-five or twenty-six years old, was the mother of an illegitimate son about 6 years old, who was yesterday the victim of the horrible crime. The mother, it appears, had been, until recently, living away from home. The last place where she lived was with a family near Lancaster, and always had her child with her. For some time past she and the boy had been living with his father’s, and it would seem not very pleasantly, owing to the presence of the boy, who was the subject of ill-treatment, it is said, by his grandfather and the other members of the family, and which led to much unpleasant feeling, feuds and quarrels.

It is said that the child had been subject to threats if violence by members of the family – however, as to this, nothing is absolutely known beyond the statement of the mother. Yesterday morning the mother took a common wood ax, and approaching the bed where her boy was sleeping, struck him with the edge of the ax twice on the top of the head, each blow sinking the ax into the skull up to the handle, scattering the blood and brains around over the bed and the rails of the house, and of course killing the child instantly. The woman’s mother and sister, who were on the outside of the house, saw her commit the act through the open crevices in the cabin. Justice Betz, of Chandlersville, was notified of the fact, and on repairing to the place, found the mother sitting on the foot of the bed on which the body wag lying, with his bead split open.

The woman, on being arraigned yesterday before Justice Betz, acting as Coroner, pleaded guilty to killing the child. The Justice ordered her to be committed to the County Jail, to await the action of the Grand Jury. She was brought here and placed in jail at 8 o’clock this morning. On the way she remarked to those who had her in custody: “I don’t feel as badly as I expected: I have nothing to regret, and I would do it again.” When told that she might be hung for the crime, she said: “I want them to hang me. I don’t want them to send me to the Penitentiary; I want to die.”