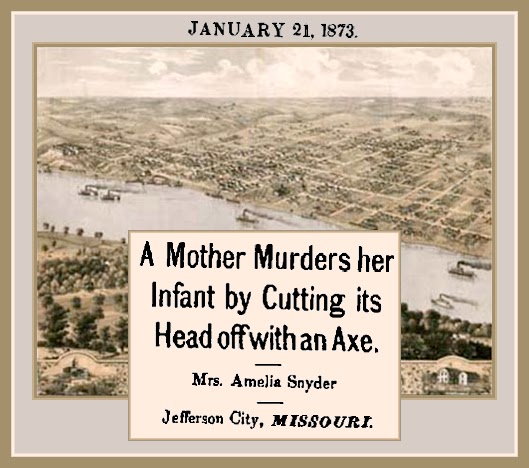 FULL TEXT: Jefferson City, Jan. 21.—10 a. m. About half past 8 o’clock this morning, the good people of Jefferson City were terribly shocked by the perpetration in their midst of the horrible crime of child murder, done by the hands of its own mother. Mrs. Amelia Snyder, the wife of an employe, on the Mo. Pacific Railroad, murdered her child, six weeks old, by cutting its head off with an axe.

About the time she was committing the horrible deed, her husband arrived at the house and tried to get in at the front door, but Mrs. Snyder would not admit him, so he went to the back door and found it open.

When he got in the house, he found Mrs. Snyder in the closet and the child lying on the floor with its head cut off. She gives no reason for committing the deed, only that on last Sunday, she told her husband that she intended to go to St. Louis and enter a house of ill fame [a house of prostitution], and Mr. Snyder told her if she did he would never live with her again, and that he would get some one to take care of the child.

Mrs. Snyder is now in the custody of the proper officers and the Coroner’s jury will soon assemble and render a verdict in accordance with the facts here given.

Mr. Snyder is a hard working and honest man, and lives on Madison street, between High and McCarty.