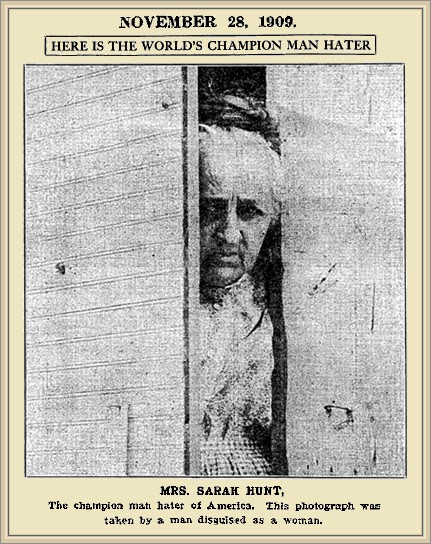 FULL TEXT: Secluded for twenty years from every male creature, Sarah Hunt, of Lapeer county, Michigan, at 65 years of age, leads a life such as no woman ever led before.

And it is from choice, for this practical man hater has living a husband and two grown sons, who love her and would gladly abide with her. She, however, leads the life of a recluse and relentlessly proclaims and pursues her determination to deal out death and destruction to every male thing, man, beast, or fowl, that dares trespass upon her female domain of 40 acres of pine stump land in Deerfield township, Lapeer county, Michigan.

There is not a male creature on this tract of farmland, unless it be of the bug or reptilian family, or the birds that fly over the place. All of the domestic fowls and animals are female. There is not a rooster, a drake, or a gander in Mrs. Hunt’s barnyard, although she keeps a large flock of all kinds of fowls. As for man, not one has dared enter her premises In many years.

Six years ago the woman’s dilapidated old cabin caught fire from an overheated  stovepipe. It was a bitterly cold February night and the blazing of the clapboard roof attracted the attention of the neighbors, who turned out eagerly, not only desiring to do Mrs. Hunt a neighborly turn, but also finding in the occasion an opportunity of testing the antipathy she had so long shown toward men. Rushing to the house with buckets and ladders, they set to work without heralding their coming. The recluse, who invariably retires for the night at sunset, was all unconscious that the roof over her head was a mass of flames.

~ Rather Roast Than Have Men Near. ~

“What devil in the form of a man is there?” was the first sound that came from within the cabin and the ladders crashed against the eaves.

“Your house is on fire, Mrs. Hunt, shouted back Frank Dockham, a neighbor. “You’ll be burning in hell if you don’t get put of this,” retorted me frenzied woman. “I’d rather roast in my bed than have any human devil of a man desecrate my place.”

But the men were on the roof, chopping away at the burning rafters. Others were passing palls of water. They heard the occupant unfasten hurriedly the heavy bars on the door, and in another instant it creaked on its hinges. Bang!” A rifle cracked and a leaden ball whizzed close to the head of Uncle George Cole, Mrs. Hunt’s nearest neighbor, who was wielding the ax. Hurriedly the volunteer firemen scrambled away as the enraged woman rammed another charge home in her old muzzle loader. They disappeared into the night and the recluse turned her attention to the fire, by that time nearly extinguished. The next morning passers-by read with avidity the following, scrawled, on a piece of paper flour sack and tacked on the front gate post of the Hunt dooryard:

This Here House is Old Sarah Hunts Ef It Burns Down Its Nobodys Bizness But Hern. So All You He Men Jest Keep Awa.

They have, since then.

The recluse attends to all her farm work herself. She plows and harrows and harvests her crops, as a rule, with her own hands, but occasionally will hire a woman to assist her with such “work as she cannot well handle alone. When female help is hired, the mistress of the place prefers a young single woman, her aversion to everything male extending in some degree to married women.

~ Can Tell Rooster Before Hatching. ~

How she manages to keep the 40 acre farm devoid of every male thing, even to farm stock, was for years the marvel of all who knew the strange woman, but she has practiced the plan so assiduously that her method is reduced to a science. Cats she has galore, but Sir Thomas [meaning a tomcat] is conspicuous by his absence, and many an interesting feline of the male sex has given up his nine lives on the Hunt place, falling a victim to the mistress’ rifle. Mrs. Hunt buys eggs for hatching. When chickens hatch she is able to tell the male from the female at an age so early as to be the envy of “chicken cranks.” Better than this, the neighbors say, Mrs. Hunt can in the majority of cases distinguish the eggs that will hatch pullets from those that will hatch roosters. This skill extends to the products of other fowls. Ganders are especially hard to distinguish from geese, but the male goose is barely out of the gosling class before the man hater has it spotted for sale or slaughter.

In her dealings with the outside world Mrs. Hunt never speaks to a man nor does she look at one. When she goes to the country store two miles away she has her business all reduced to writing, so that, in case the wife of the storekeeper is not there to wait on her, there need be no occasion to talk with the grocer or his clerk. She seldom, however, leaves her domicile. Most of her business is transacted through the wife or daughter of a neighbor. She has not visited the county seat in fifteen years, and has never been on a railroad train.  Ten years ago, when she was stricken with typhoid fever, neighbor women tried to induce her to call a physician.

“If you find a woman doctor, it’s all right,” she said. “If not, I’ll die rather than have one here.”

No woman doctor could be secured, and Mrs. Hunt was nursed through her long illness without a physician.

~ Her Antipathy Result of Dream. ~

The woman’s strange attitude toward men and things male was first manifested twenty years ago. She has said that it came to her in a dream as a command from heaven. At that time she was still on good terms with her husband, two sons and a daughter. At the breakfast table one morning she told of the “command” from the Lord. She was laughed at by the family, but as the days passed she talked more and more of the “spirit injunction,” finally demanding that her husband and sons leave the place. After every means to disillusionize the woman had been tried in vain and life on the little farm became unbearable for the husband and the boys, they departed, obeying the command never to return. Soon afterward the daughter died, and is buried near the house.

Mrs. Hunt has confided to women of her acquaintance that she has never regretted the strange turn in her life. Her desire is, she has told them, when she dies, to be buried beside her daughter on the little farm she has so long guarded jealously against masculine intrusion. She has begged that no men or boys attend her funeral, that her grave be dug by women, and that all the offices to the dead be performed by feminine hands.

By the people of Deer-field township, Mrs. Hunt, despite her strange conduct, is not regarded with fear or aversion. They say that she is a good woman, kind of heart, and ever willing to do what she can to help others, provided she can do go without violating what she calls “the pledge to myself.” Though lacking education, she is a woman of no ordinary intelligence, reads the newspapers, and keeps well posted on the affairs of the world.