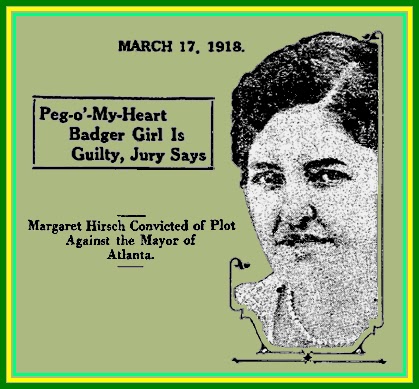 FULL TEXT: Atlanta, Ga. , March 16 – The jury in the case of Mrs. Margaret A. Hirsch, charged with attempted blackmail of Mayor Asa G. Candler, returned a verdict of guilty late today. The jury was out only twenty-six minutes.

The court at once imposed a sentence of twelve months in jail and a fine of $1000, the maximum penalty in a misdemeanor case.

Mrs. Hirsch received the sentence without a tremor and without a comment. Judge R. B. Russell, for the defense, served notice of an appeal for a new trial and the court fixed the ball of Mrs. Hirsch at $8,000. Mrs. Hirsch was taken back to her cell to await bail.

The jury was out 25 minutes. In sentencing Mrs. Hirsch, Judge Hill said:

“Blackmail is a terrible crime, as bad as highway robbery. The robbery of a man’s character or the attempt to rob him of his character by extortion of money is as bad morally as the robbery of him of his money on a public highway, if not caused in the same degree by law.

“Many a man would rather face the pistol of a highwayman than exposure by fraud.”

Throughout the speech Mrs. Hirsch remained seated, her elbow on the table and her chin in her palm. She kept her eyes lowered. Not a shadow passed over her face.

Mayor Candler sat not far away with his counsel and relatives. There was no sign from them more than of casual interest.

Mrs. Hirsch said tonight that she had not decided whether she would furnish the bond for her freedom pending: the outcome of her appeal. J. W Cook, real estate man, gambler and sportsman, recently convicted of attempting to blackmail Asa G. Candler, multi-millionaire mayor of Atlanta, is in jail awaiting the outcome of his appeal from sentence of a year on the chain gang in addition to a thousand dollar fine.

Mrs. Hirsch, better known among her friends as “Peg o’ My Heart,” is a society woman, prominent in Red Cross work and similar undertakings, in connection with which she first became acquainted with Mayor Candler. Her husband, H. H. Hirsch, is a traveling man.

Mayor Candler is reputed to one of the wealthiest men in the South. He is said to be worth between seventy-five and a hundred millions. He is a patron of the philanthropies, and was particularly active in the recent Red Cross drive for funds with which to prosecute war activities. Mrs. Hirsch, well known and engaged prominently in the same undertakings, secured ready access to the mayor, and the alleged plot between herself and Cook thus became comparatively easy to manipulate.

The couple, according to the evidence adduced at the trial, undertook to work the old “badger game” upon Mayor Candler, choosing to believe that the major would pay tribute rather than face the scandal with which they would threaten him. But the mayor, instead of paying, undertook to negotiate with his tormentors through his friends, and thus secured from them a direct offer to drop the matter for a monetary consideration.