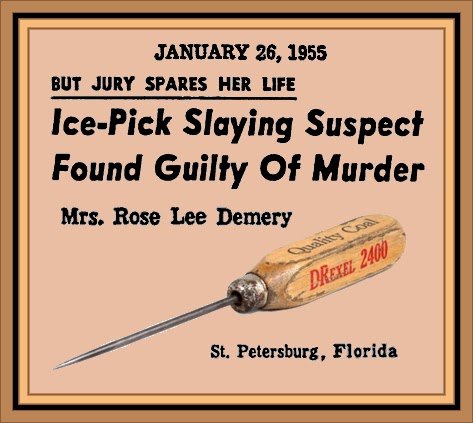 FULL TEXT: Clearwater, Florida – A jury last night found a St. Petersburg woman guilty a first-degree murder in the ice-pick slaying of her love rival, but spared her life by recommending mercy.

The recommendation of the jury, which deliberated six hours, carries an automatic life sentence for Mrs. Rose Lee Demery, saving her from the electric chair.

Earlier in the trial – the second for Mrs. Demery, whose first ended in a mistrial when the jury failed to agree – the state introduced a confession with no objection from the defense, which pleaded self-defense.

St. Petersburg Detective J. M. Wellman stated Mrs. Demery had signed the confession at the police station on July 26 in the presence of witnesses.

Headed by James Smith, St. Petersburg attporney, the defense contended throughout the day yesterday that while Emma Louis died as a result of wounds inflicted by Mrs. Demery, she stabbed her victim in the chest only in self-defense.

Placed on the stand in her own defense, Mrs. Demery testified she committed the act in self-defense. She said she had gone to the beer garden about 12:15 a.m., July 26, to have a business talk with Walker.

Mrs. Demery testified further that her life had been threatened as early as last May by the woman and that on the night of the stabbing she (Mrs. Demery) stood outside the tavern and asked Walker to come outside to talk with her.

She stated Emma Lois was in the tavern with Walker; followed him out the front door, armed with a knife and slashed at her three times.

It was only then she struck back at her assailant with an ice pick she had been carrying for protection, she testified, she did not realize she had wounded the Davis woman at the time, she added.

Davis argued Mrs. Demery could not plead self-defense because, she said, she had started the quarrel which led to the Davis woman’s death.