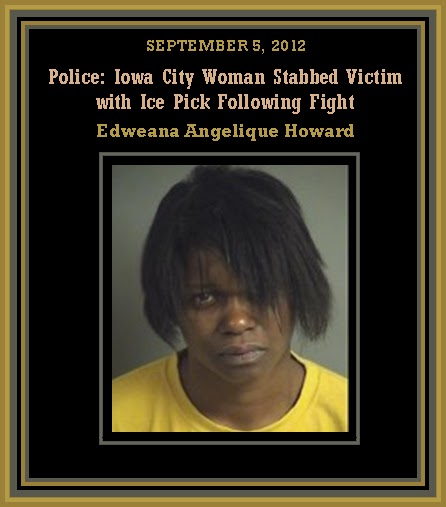 On September 1, 2012 Edweana Angelique Howard, 37, of Iowa City, Iowa allegedly stabbed an unidentified victim with an ice pick following a fight. Police did not state the sex of the victim, but noted that attackee received multiple stab wounds from attacker. Howard was charged with going armed with intent, a Class D felony, and willfully causing another a serious injury, a Class C felony.

Ms. Howard had previous domestic charges on Feb. 27, 2010 and September 6, 2011. The 2011 charge was for second offense domestic abuse assault, an aggravated misdemeanor. Police, responding to a call found Howard's husband bleeding from the lip. The bleeding Mr. Howard that his wife had punched him in the face after learning that he had driven her car and he then went to the neighbor's house to call police. Mrs. Howard told a different story, asserting that she had no idea why her husband's lip was bleeding or why her own knuckles were bloodied.