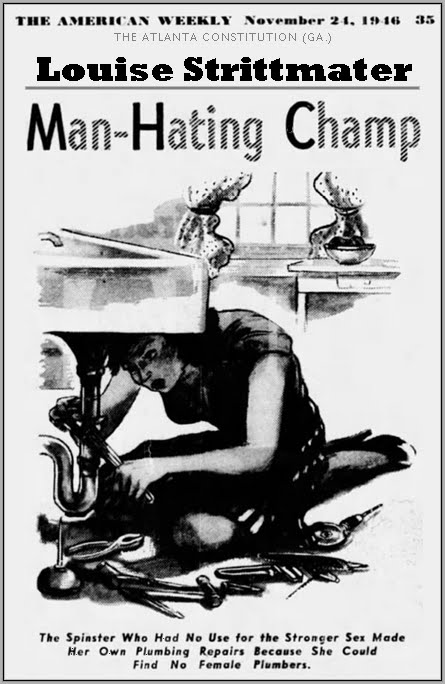 FULL TEXT: Cartoonists and writers have a lot of fun portraying slyly humorous episodes in the eternal war between the sexes. Most readers, whether men or women, enjoy these sallies, but there was one feminine observer who never cracked a smile.

She was Miss Louisa Strittmater of Bloomfield, N. J., and she wasn’t a mere bystander in the theoretical fray. To her it was real and she jumped into the fight, swinging verbal brass knuckles at every opportunity. A full-length picture of Miss Strittmater’s utter aversion and hatred of men came to light the other day in a will contest initiated after the spinster’s death.

The judge who tried the case disclosed that Miss Strittmater had:

1 – Believed that men some day would revert to apes. She blamed them for “degrading”‘ women and proclaimed that all men were “vicious and contemptible.”

2 – Looked forward hopefully to the day when science would enable women to bear children without the aid of men. Once woman acquired this power she wanted all male children killed at birth.

3 – Buried a small fortune in gold coins in the cellar of her home because she couldn’t find a bank run by women only. Did her own plumbing repairs for the same reason – no women plumbers.

4 – Cut off all her male relatives and willed all but $100 of her $15,000 estate to the National Women’s Party for the Advancement of Feminism.

“Do not let any man pretend that he is my husband or friend or in any way related or connected with me personally.”

Such wholehearted devotion to the “cause,” in the opinion of legal observers, established Miss Strittmater as America’s all-time champion man-hater.

But it was just as well for the champion’s peace of mind that she couldn’t look beyond the grave.

Two male cousins brought suit to break her will, and they were joined by a female cousin whom the despiser of men had left in the cold with $100.

Worse yet, the case was heard by a member of the sex Miss Strittmater regarded as “the inveterate enemies of women.” This “enemy” reviewed the evidence in terms which would have driven the crusading spinster frantic. The judge, Vice Chancellor John O. Bigelow, spoke of her “paranoiac condition,” and ruled that her self-righteous war on men actually was “insane hatred.” For reasons of mental unsoundness he voided her will. Miss Strittmater thus lost her last wish —that her money keep on fighting for the cause dearest to her in life. But man didn’t emerge entirely unscathed.

Many a male — who’d secretly thought himself a pretty fine fellow — has taken a questioning look in the mirror since reading her sour testimonial.