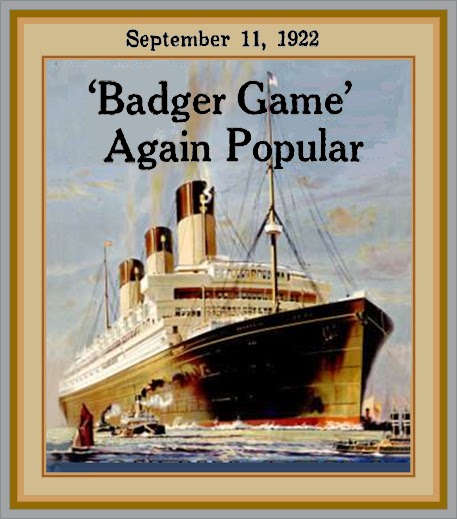 Badger game – Badger game is slang for a deception whereby a woman lures a male victim into a compromising position whereupon they are caught by her accomplice who pretends to be the husband. The couple then blackmail or demand money from the victim. [The Probert Encyclopedia]

FULL TEXT: London – blackmail has ousted card-sharping from its place at the top of the list of indoor sports arranged by the versatile crooks on the great trans-Atlantic liners for their moneyed victims.

Still hardy despite its old age, the “badger gamer” is the most popular and most profitable.

“We know the ‘badger game’ is being worked on every great liner,” said a steamship official. “Often it is worked half a dozen times a trip on one ship. But no passenger has ever complained. We know most of the card-sharpers. We know many of the blackmailers but we have no proof as to their activities aboard ship.”

“Many women, easily recognized as too smartly gowned, a little too well-complexioned at night and a little too frequent in their journeys across the Atlantic – are known to us. Their ‘husbands’ – most of them carry them, though a few work alone along simple holdup lines – are of their own type, expensively dressed and superficially polished but always lacking the something that would make them gentlemen.

The women who work alone permit themselves to be made love to by ardent young men – or men who feel young, anyway – with too much money, and after they have succumbed to their lovers’ persuasion, merely threaten to call for help or to sue for breach of promise.

It is the couples who work the badger game, however, who have the best of it. They usually pick a man to whom exposure would be serious, preferably a rich business man, with a family. The victim meets the wife; the husband is introduced and faithfully plays the role of colorless uninteresting spouse.

The wife complains that he does not treat her well; she detests him. If the victim falls – and he usually gallops to it – he is seen about with the wife frequently. She is always afraid her husband will suspect something. The victim believes himself a Lothario and probably starts wearing flowers in his buttonhole.

Then, one night, he sweeps the wife off her feet. The husband finds them together. The horrified recoil towards the door; the look of pained amazement; the outraged husband’s just anger; the clenched hands reaching out for the housewrecker’s throat; the tearful, terrified wife; the penitent “mug,” pop-eyed with fright and thoughts of home and Alice and the three children, the wife’s plea for forgiveness; the husband’s frenzied “No! not for $10,000!” The “mug’s” sudden thought: “Twenty thousand dollars maybe?”

So far there has not been a case in which the wronged husband has not consented to try to plaster his wounds with a few thousand-dollar bills.