Helen Tiernan, Hatchet Murderess Whose Kids were “In the Way” - 1937 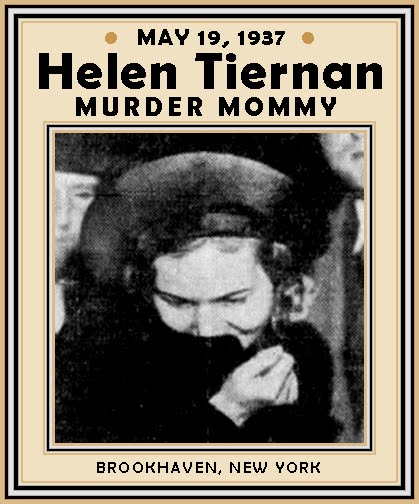 FULL TEXT (Article 1 of 7): Patchogue, N.Y. – Mrs. Helen Tiernan, 25-year-old mother confessed that she killed one of her two children and tried to kill the other, because they interfered with her love affair, was arraigned on a charge of first degree murder here Tuesday and pleaded not guilty.

George Christodulus were brought to the town hall here after the blond widow had told conflicting stories of the slaying of her 7-year-old daughter, Helen, and the attempt to kill her son, Jimmy, 4, Saturday in the woods near Brookhaven.

In Manhattan, where Mrs. Tiernan and Christodulus went through the police line-up, Mrs. Tiernan implicated him in the slaying, telling officers they decided to “get rid of” the children because there was not room enough for all of them in her two-room apartment.

At Sayville, en route here, however, Mrs. Tiernan reverted to an earlier story and told Asst. Dist. Atty. Joseph Arata of Suffolk county that she “did it alone.”

“I held Helen while George hit her.” Mrs. Tiernan had told Manhattan police. “Then I cut her throat and cut Jimmy’s throat.”

“I poured gasoline on them. I lit it. Helen came to for a minute. She crawled a little way, about five or six feet. Then she lay still. Jimmy didn’t move. I threw some leaves and weeds over them. Then I went back to the railroad station.”

She said she loved Christie, and that they had been trying to live in her apartment, which had only one bed.

“George slept on one side in the center and Helen slept on the other side and jimmy lay across the foot,” she exclaimed. “It was very uncomfortable and we just couldn’t put up with it.”

Christie  admitted that he had told Mrs. Tiernan that he might marry her if the children were out of the way, but he steadfastly denied that he had any part in the killing.

Police believed it unlikely that Mrs. Tiernan would ever pay the extreme penalty for her unnatural deed. They revealed that her mother was a psychopathic case for the last 15 years of her life. George Smith, her father and an unemployed machinist,  said the mother died eight years ago in a state hospital for the insane.

FULL TEXT (Article 2 of 7): New York, May 19 – Less than eight hours after Helen Tiernan killed her little girl and tried to kill her son, she was feeling so gay that she couldn’t wait until Sunday to go for an outing at Jones’ beach.

I know, because Helen and her boy friend, George Christie, held a gay, rollicking party in my apartment, on the very night of the day when Helen hacked and slashed her daughter to death.

I keep that idea in my mind when I look back on it. It makes me so sick that I haven’t been able to eat ever since I learned about what Helen did.

One thing, especially conies back to me now. Those children were insured, I don’t know for how much, but I can’t understand how Helen could afford the premiums. The worst thing that comes info my mind is that Helen stood to profit by the death of Helen and Jimmy.

Helen and George showed up at my place at about 10.15 Saturday night. Henry Gabel, my fiance, who lives across the street was in the apartment, too. 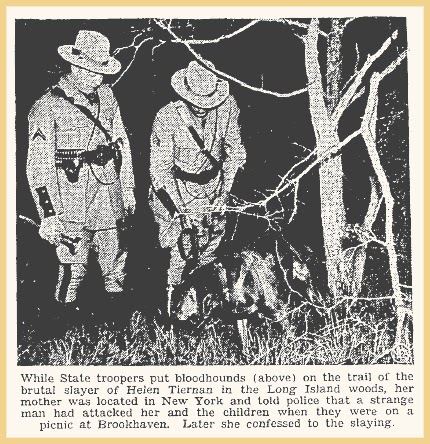 But, I couldn’t tell the slightest change in her that Saturday, night when she was giggling and laughing and getting all excited about going to Jones beach the next day. And that little girl lying dead in the woods!

There was one thing I noticed, though. She couldn’t cat. And when George wanted us all to go for a ride in the 1936 car he’d just bought, she said:

An she had a bandage on her left index finger. When I asked her how she hurt herself she just laughed and said she was frying some food for the children and the lard sputtered up and burned her.

There was no drinking that night. But Helen was always gay; She was so wrapped up in George that she didn’t need any liquor to make her feel happy.

He was a “tough guy” in Greece. He often used to tell us how he had been a kind of Greek marine looking for bootleggers.

“Come over here, Helen and give me a kiss.” 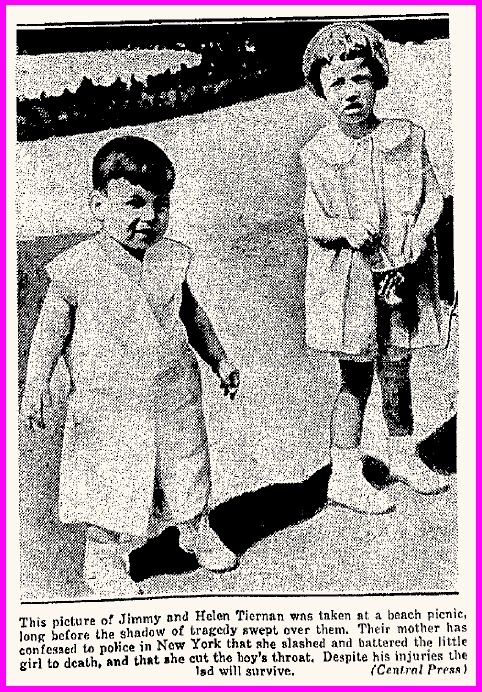 Her giggling turned to sobbing, and she showed signs of. anxiety regarding the surviving child, four-year-old Jimmie.

In the Suffolk county jail at Riverhead, Long Island, where she was held on a charge of first degree murder after police announced she had confessed, the 25-year-old embroidery worker told. Dist. Ally. L. Barron Hill, that she would like to see Jimmie.

But, Hill said she told him, she was ashamed to face the boy. Would it be all right, she asked, if she could just peck in at the door while he was asleep? Hill did not act on the request immediately.

Jimmy was in a Patchogue, hospital, recovering from a throat slash his mother was accused of inflicting.

But after she sobbed later and asked to see her son, Hill observed “there is no doubt she is an absolutely sane women.”

Hill said he would present the case to the Suffolk county grand jury next Tuesday.

Held ns a material witness was George Christodulus, 29, restaurant worker and suitor of Mrs. Tiernan. He was cleared by her late yesterday after having been implicated in one of her earlier versions of the crime.

“I did it all alone,” Hill quoted Mrs. Tiernan as saying, I loved George so much I would do anything for his love.” 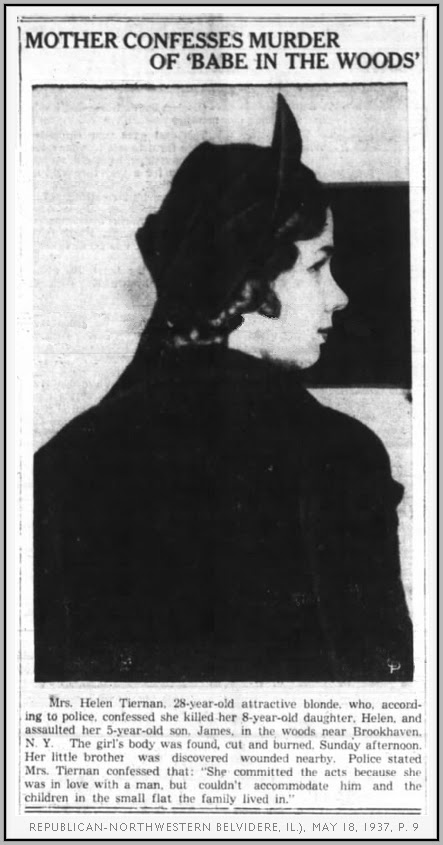 FULL TEXT (Article 4 of 7): Riverhead, N.Y., May 30 – John Tiernan, a gas station employee, said today he would like to adopt his four-year-old nephew, Jimmy Tiernan, whose throat was slashed in the woods of nearby Brookhaven last Saturday when his seven-year-old sister was slain.

“My wife suggested it to me. We have no children of our own,” Tiernan, 24, said. His wife is a telephone operator.

Jimmy’s only close relation is his young widowed mother, Mrs. Helen Tiernan, in jail here charged with murdering her daughter and tying to kill Jimmy to “get the out of the way.”

Tiernan said he would see his lawyer about court action to get custody of the child, recovering from his injuries in a hospital.

Mrs. Tiernan was given sedatives after several fits of hysteria last night. Dr. Albert Payne said “she is in very bad shape.”

District Attorney L. Barron Hill said Mrs. Tiernan reiterated to one of his assistant today her statement that she alone was responsible for planning and perpetrating the crime.

Benson recounted to reporters today that several years ago he broke into the apartment when the two children were alone there and found two gas jets open and a new lock on the door which his pass key would not fix.

Benson, a Boston policeman for 15 years, lives in Mineola.

He said Mrs. Tiernan had asked him several times if she could have her friend, George Chistodulos, waiter under $50,000 bail as a witness in the case, come and live at the apartment. 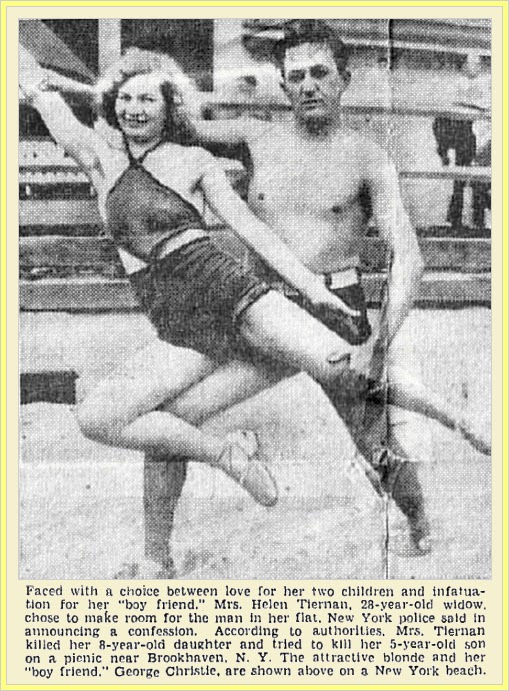 FULL TEXT (Article 5 of 7): Riverhead, N.Y., June 13 – Mrs. Helen Tiernan, blonde widow from the “Hell’s Kitchen” district of New York west side, will be called for trial on a first-degree murder charge tomorrow as a result of the torch-slaying of her 7-year-old daughter, Helen.

The widow’s four year old son, James, was slated to be one of the principal witnesses against her. The boy was recovering in Patchogue hospital from scissor would allegedly inflicted on him at the same time his sister was killed.

Prosecutor hill accused the woman of attempting to get rid of both of her children during a “picnic outing” in a Long Island woods May 15 in order to make room in [her] New York flat for a suitor George Christodulus.

Christodulus, whom the woman first implicated, then cleared, was held as a material witness.

“A murder of a helpless child, with this sordid motive, is certainly worthy of the most severe punishment the law can meet out.” 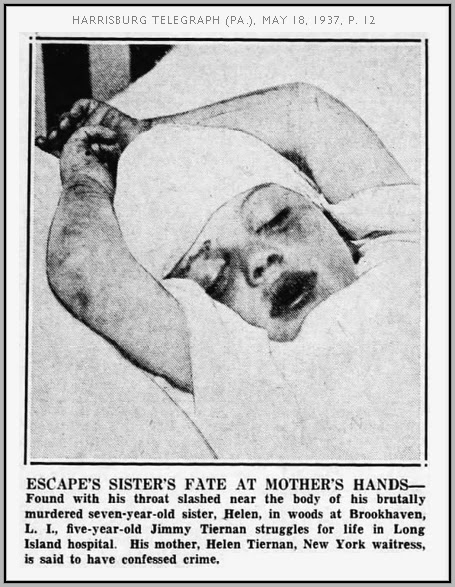 The 28-year-old embroidorer attacked her daughter Helen, in a wood, killing her, and attempting to kill her son, Jimmy. 5, by beating, slashing and burning.

Mrs. Tiernan said her attack on the children was prompted by a desire to be free to carry on a love affair with a Greek waiter. 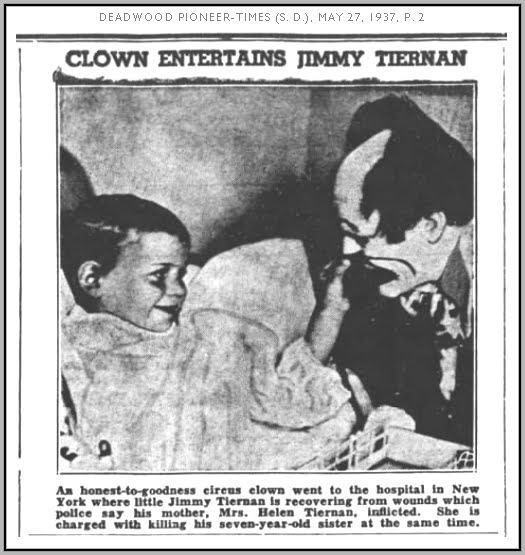 FULL TEXT (Article 7 of 7): New York, June 26—A state’s psychiatrist declared today that Mrs. Helen Tiernan, sentenced for 20 years to life, for the “babes in the wood” murder of her daughter and attempted murder of her son was plunged into a weird mental storm by the Hindenberg airship disaster.

It was the explosion and burning of the airship which suggested, in her peculiar psychological state, both the idea and the method of her crime. Dr. Frederic Wertham reported to L. Barron Hill, district attorney of Suffolk county, L. I. Dr. Wertham’s report, held confidential until today, was allowed to be made public by Mr. Hill for Its extraordinary scientific interest.

As far as is known, there is no such record of murder conditioned in a normal person by the suggestion of an outer event, Dr. Wertham’s analysis shows.

In summing up the result of the psychological examination made at District Attorney Hill’s request on May 22 and 23, before Mrs Tiernan was brought for trial, Dr. Wertham said:

“It is my opinion that Helen Tieran is not psychotic (mentally diseased, insane); nor is she a mental defective.”

Apart from having a simple, “dull, normal mind,” Mrs. Tiernan was found to be “extraordinarily suggestible.” Dr. Wertham disclosed in his report:

“Helen Tiernan received the whole suggestion of the crime from what she rend in the newspapers about the explosion and burning of the Zeppelin Hindenberg,

“The concept of killing itself, and of the device of burning the bodies to conceal identification, were induced by the great and stirring airship disaster.

“The suggestion of the emotional state of mind, as well as of concepts or plans, must be considered as a psychological unity.” 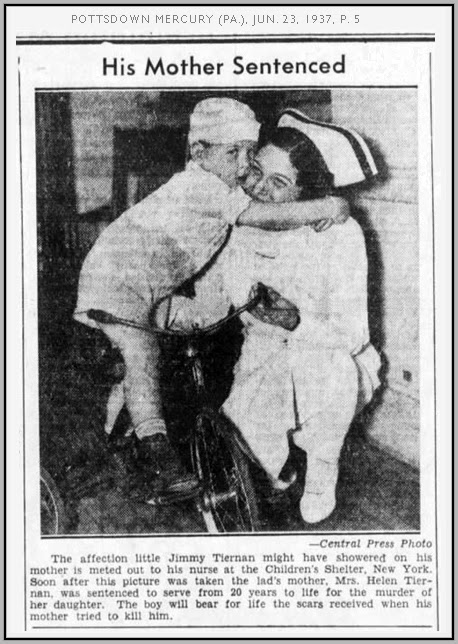 “I read in the newspapers about the explosion and the burning of the airship on May 6. The newspapers wrote the details on may 7, 8 and after that.

“Many bodies were inside the ship and were burned, and it was said they could not be identified. This gave me the idea of killing the children and burning them to avoid being identified.”

Further examination showed that the idea of slaying the boy and the girl, too, was suggested to her by an outside event. Mrs. Tiernan had read about the MacKnight case, in which the mother was killed with an axe or hatchet. The choice of Brookhaven, L. I., place where Mrs. Tiernan perpetrated her crime, was determined by her having been on a vacation trip to that spot a year ago, she said.

The very virtues of her nature, coupled with extreme suggestibility, characteristic of “dull normal” mind, or psychopathic personality, but not insanity or mental defectiveness, made her a slayer, Dr. Wertham points out. 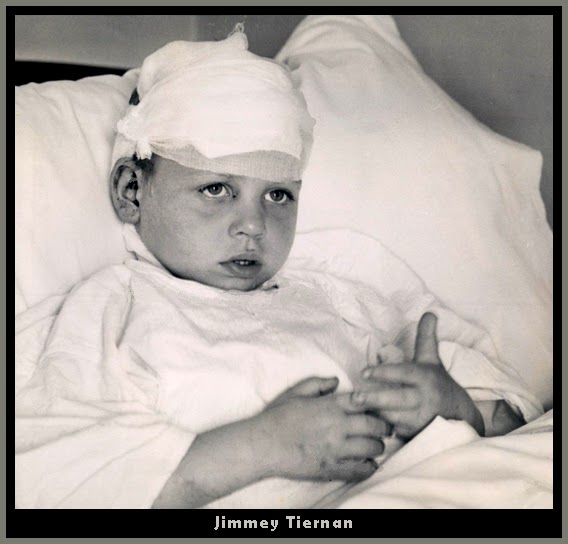 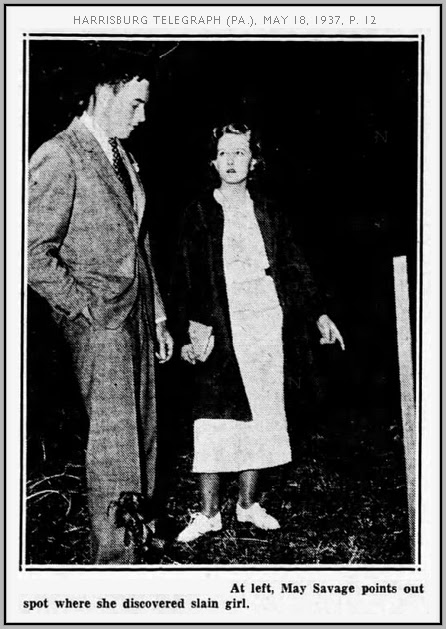 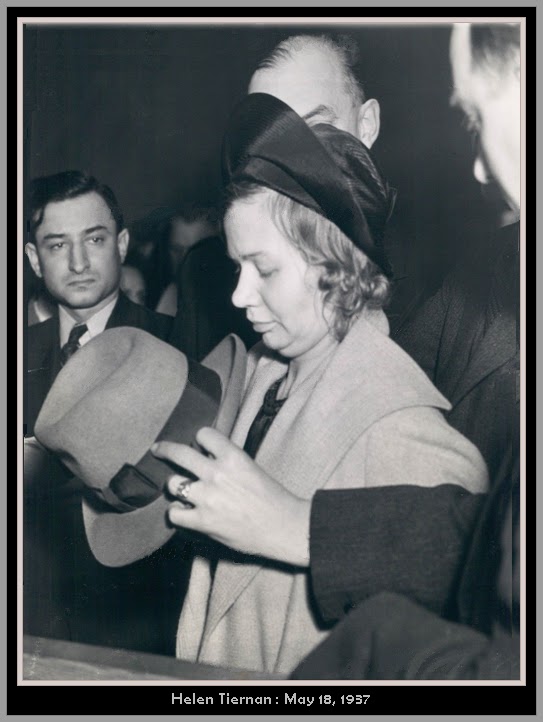 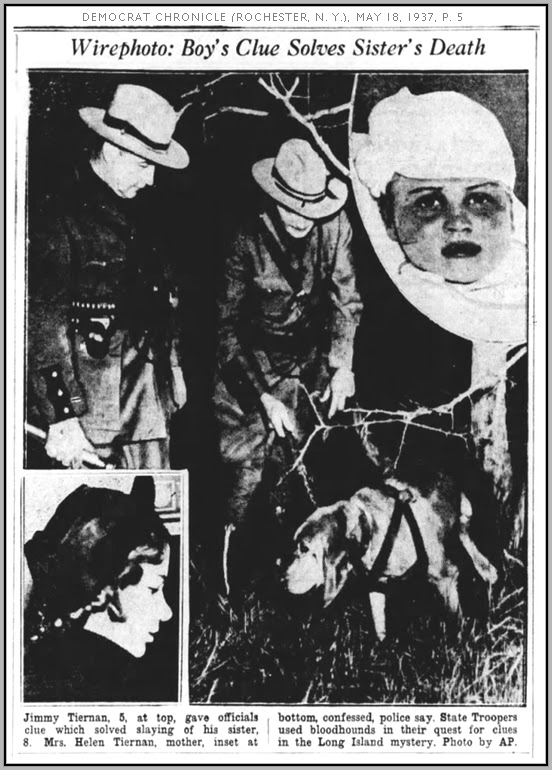 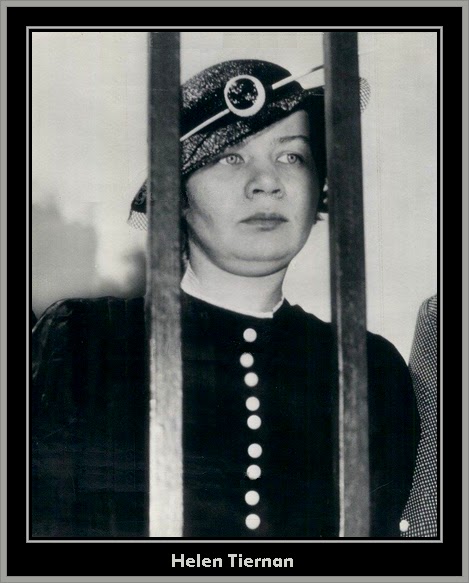 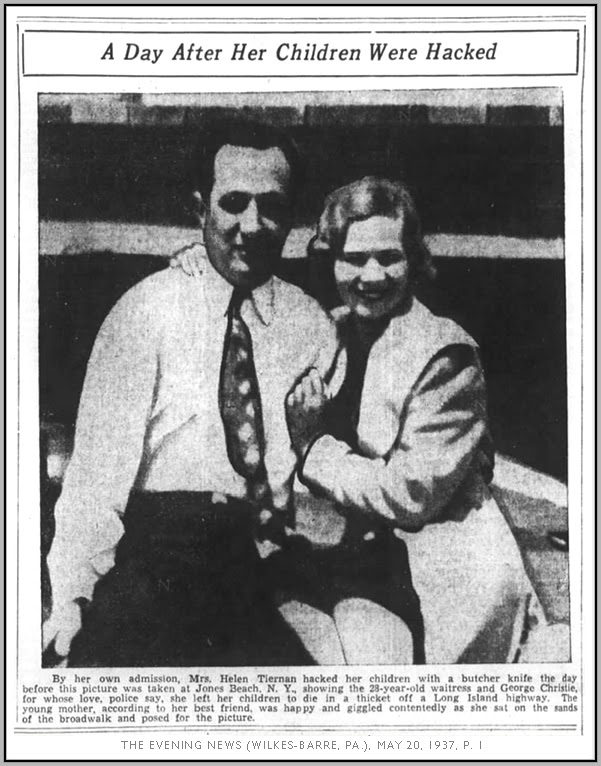 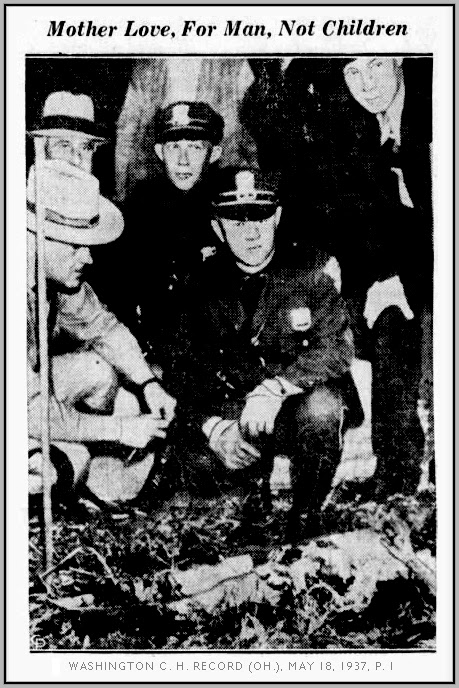 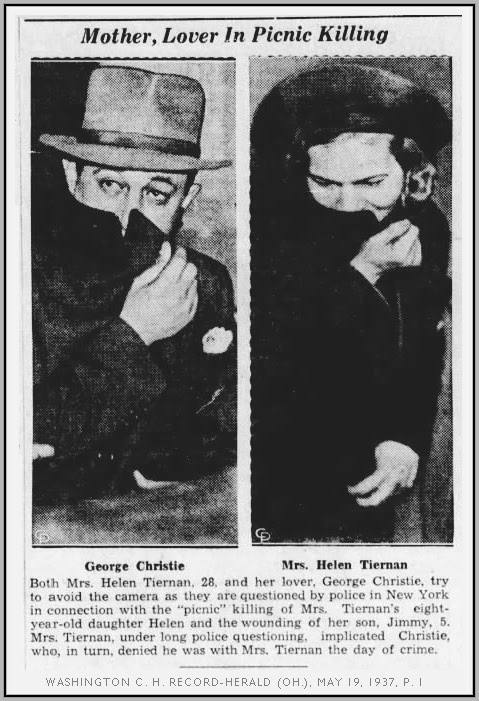 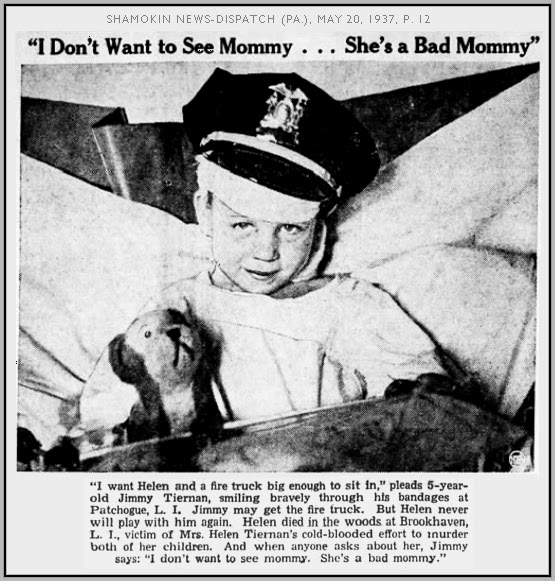 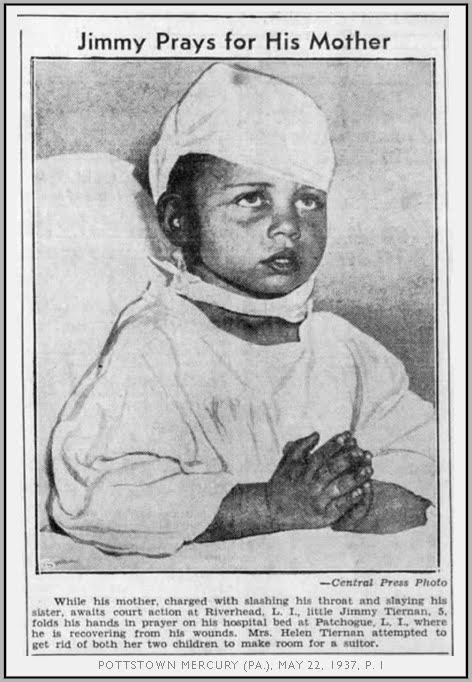 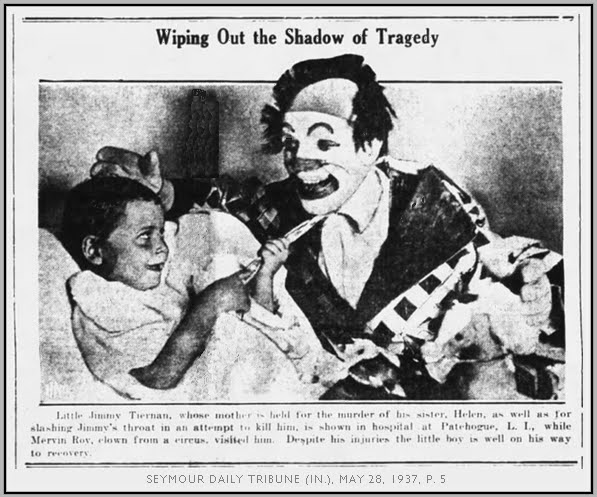 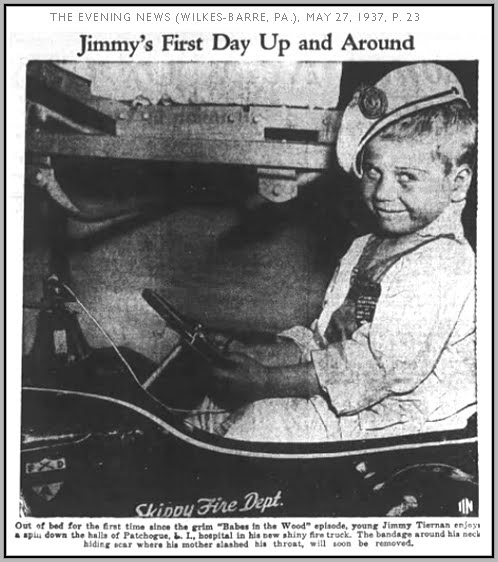 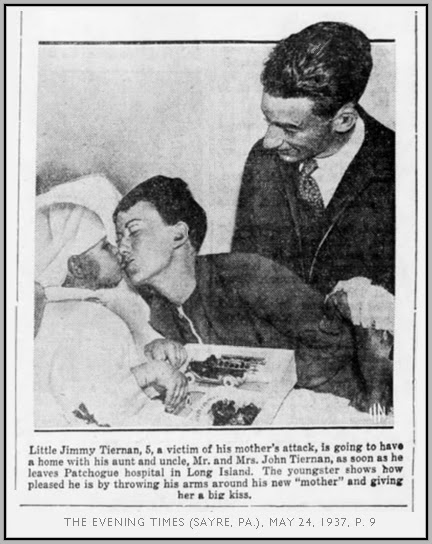 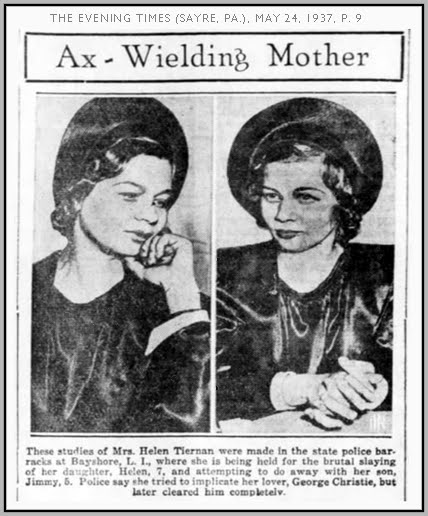 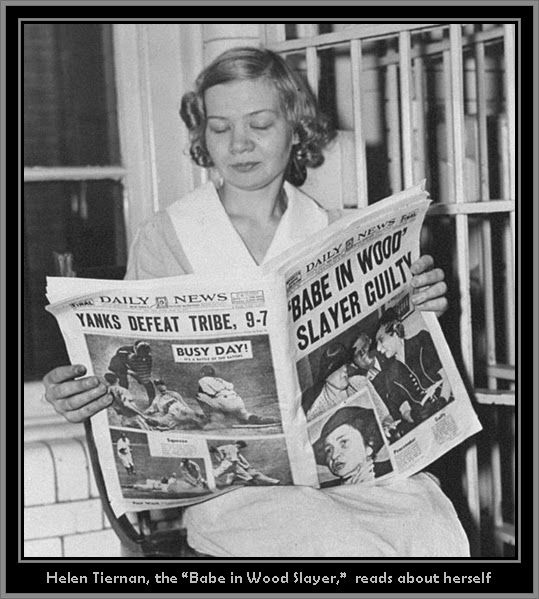 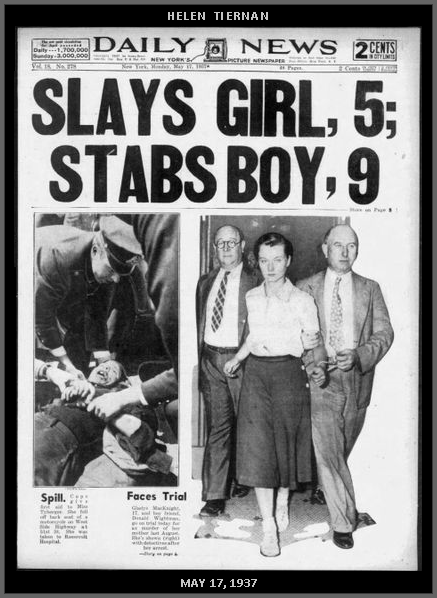 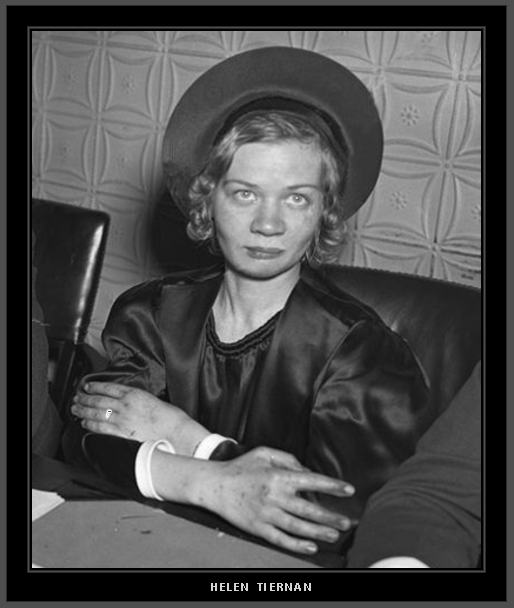 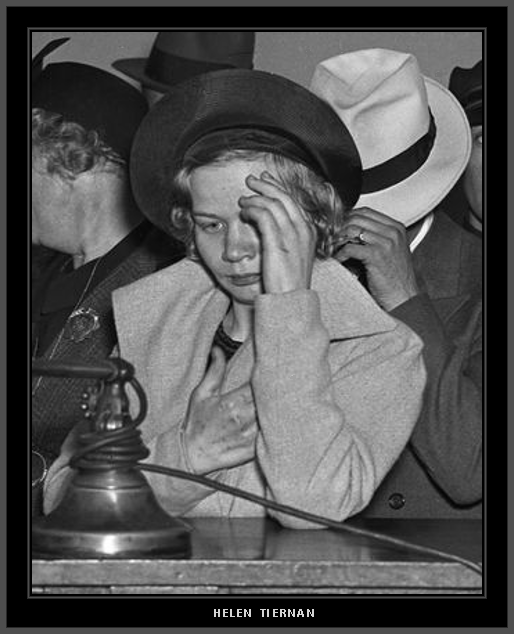 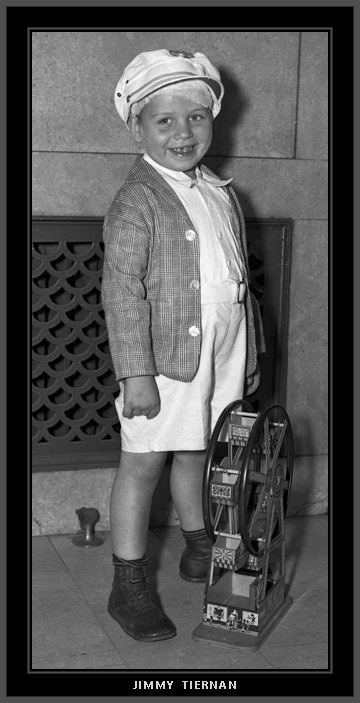 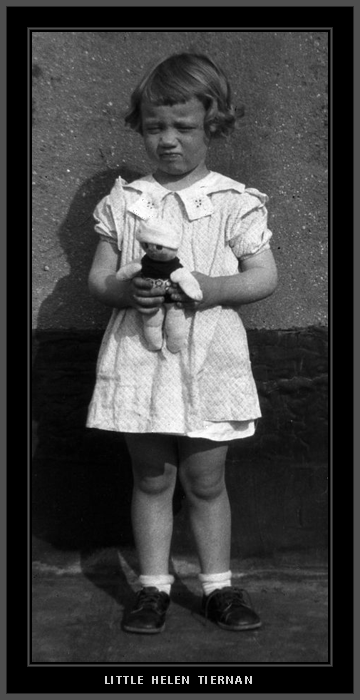