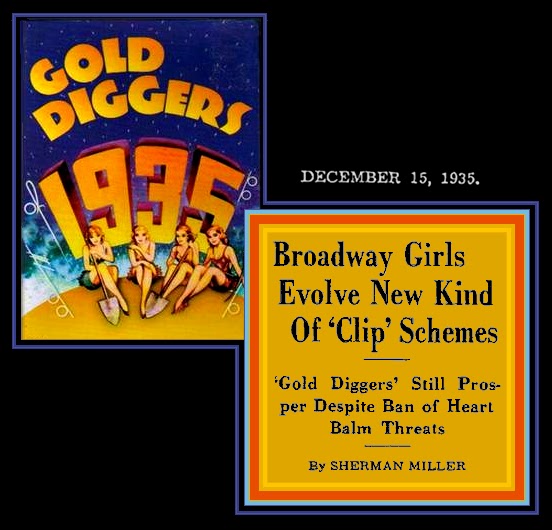 NOTE: The scams described in this article are variations on what came to be called “The Badger Game” in 19th century America.

FULL TEXT: New York – The halcyon days of “heart balm” suits are over, but Broadway “gold diggers” through petty blackmail rackets are letting larger incomes than before, so say private detectives.

Operations have become so widespread and complex that according to one of Manhattan’s “confidential detectives,” the average male visitor to New York, no matter how circumspect, “is only lucky if he doesn’t get clipped.”

This, said Detective Edward Z. Holmes, is not because the 1935 siren couldn’t trap local residents if she wished, but because an out-of-town man is more anxious to “pay off and forget it.”

The petty blackmail racket, Holmes believes, has grown to its present proportions largely because reform legislation has closed the erstwhile payoff windows marked “breach of promise and alienation of affections.”

“The girls used to have to do nothing more than lead a man into writing them a letter,” Holmes said, “then they had him. Nowadays they can’t get any place that way, so they have worked up a mess of small time traps that place a man in such an embarrassing position that he’d rather shell out a ten or twenty dollar bill than to call in the police.”

“For instance, one of the girls favorite rackets is to stand on a corner and wave at a man driving an out of town car. The girl is well dressed and says that she is in a hurry and could the man give her a lift for a couple of blocks?”

“The minute the car stops for a traffic signal she just remarks that if he doesn’t give her $10 she’ll break the car window and scream! Work? I'll say it works!”

Another less worked, but more vicious racket is the “Mann act.” A girl strikes up a casual acquaintance with an out-of-town man. She mentions that her mother lives in a town in an adjacent state, and if the man is driving up that way it’s only a short distance, could he drop her there?

When the couple arrives in the town a fake “government man” arrests them for violation of the Mann act. The phony officer can be dissuaded from taking them to the jail house for $50 or so.

The “night club entertainer racket” is worked on both sexes, Holmes said.

“A man buys a drink for a strange girl in a night club, she drugs it and has a taxi driver take him to an apartment. She stays on in the night club so she can't be accused of anything, but the next morning the girl’s ‘husband’ walks in on the man.”

“But every so often we got a confidential case of a man using the same racket on a visiting woman. It’s easier to catch the men because they can’t let well enough alone and try to blackmail the woman more than once.”

Holmes, a Hollander, who formerly was an agent for the British government in the far east, has been handling confidential cases of this sort in New York for a quarter of a century.

What is the safest way for a visitor to New York to keep out of trouble?

“Never go any place after dark alone,” Holmes said, “and I’m not talking nonsense. Any policeman or detective, private or public, will tell you the same.”

"Why, they even try to clip us – detectives. Whenever we get a call to go to a private residence, apartment or night club, we always send two men.”