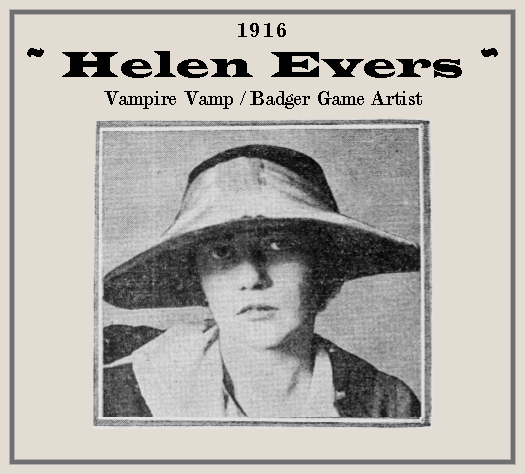 FULL TEXT: Chicago, Oct. 2.—The badger game, reminiscent of the days when the whirr-r-r of the roulette wheel was heard on Main-st and the dulcet call of the man with three shells, and the little pea was unrebuked at circus and street carnival has come back.

The renascent badger game is called million-dollar blackmail now and the name as not a bit too artistic for the operation. The blackmailers work among the wealthy, and they obtain large sums of money – hence the more imposing title.

The vampire Woman is always beautiful. But more than that, she makes an appeal to the senses— the world-old; sex appeal.

The vampire’s clothes are magnificent. Her home is in an aristocratic apartment in some large city like New York or Chicago.

Federal operatives who raided the blackmailers’ headquarters in Chicago recently found Helen Evers, alleged to be the “queen” of the band, housed in the Tyson apartments on Grand-blvd, quarters that cost $100 a month. Her wardrobes were filled with a most comprehensive array of fine clothing; gowns for every hour of the day; dozens of pairs of shoes, hats enough to strike envy in the heart of the wife of a munitions king.

These clothes were simply to dress “the lure” – essential, but not so important as the woman herself!

Cabaret and cafe life have lent a glamor of respectability to the acquaintanceships it is necessary for her to make.

A handkerchief is dropped in the lobby; the victim restores it; he is thanked, but in such a way well, one word leads to another, and the two are soon in conversation.

In summer the vampire’s work is even easier. She haunts the beaches. A woman is attractive in a bathing suit, when she doesn’t go in the water. Informal friendships thrive on hot sands beneath an August sun. 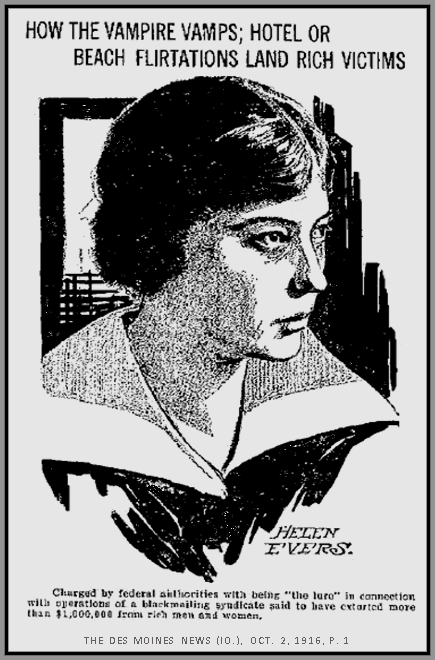