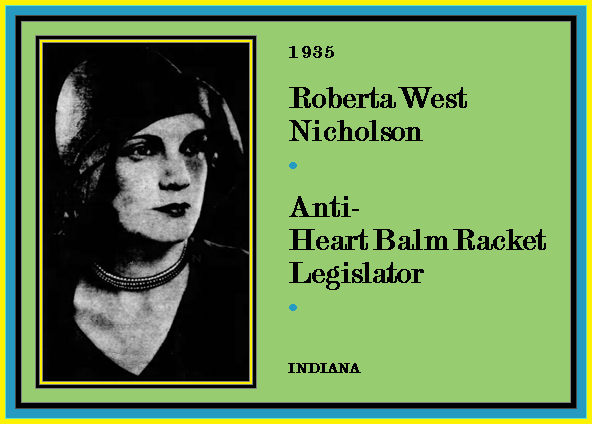 PHOTO CAPTION: Extends Heart Balm Debate – Mrs. Roberta West Nicholson, Indiana’s only feminine legislator, who was successful in campaigning for her now celebrated “heart balm” bill in her home state, plans to extend her crusade against “gold diggers” to the remainder of the nation. She has announced she will seek a law in every slate to “protect” men from heart balm suits. Mrs. Nicholson is shown above watching Gov. Paul V. McNutt of Indiana sign the heart balm bill.

FULL TEXT: Indianapolis — Having jousted the Hoosier “gold diggers” of her own sex off the gold standard by successfully championing her now celebrated “heart balm” bill through the Indiana  legislature, Mrs. Roberta West Nicholson, crusading “lady legislator” of Indianapolis now is planning to extend to the remainder of the nation her efforts for the cause of “love for love alone.”

Since Mrs. Nicholson introduced her measure in the Indiana house she has received many letters from men and women in nearly every state of the union congratulating her on initiating a “move in the. Right direction,” and expressing the hope that the movement will spread to other states.

She has mailed out more than 300 copies of her bill to persons; who requested them. As a result, “lady legislators” in Ohio, Maryland, Missouri and California have trotted out similar measures. In Illinois and New York similar St laws have been passed.

In Ohio such a bill was introduced in the lower house by Mrs. Blanche E. Hower. Mrs. Hower frankly said in an interview that her bill was to protect the men, “particularly those grown a bit; old but who still loved to play around.

“In my city of Akron.” Mrs.  Hower related, “there was a refined young woman, a graduate of Wellesley, who had a cocktail  party. You men know what cocktail parties are. Anyway, when this delightful little hostess was in the butler’s pantry a guest hugged her and gave her a light little kiss. Well, the husband saw it and sued the man and that family had to pay $20,000.”

In Maryland a similar bill was introduced in the state senate by Miss Mary E. W. Risteau, Democrat, Maryland’s only woman senator. Her bill not only would  abolish the so-called “shakedown” suits, but would make filing of such suits unlawful. This provision, Miss Risteau explained, was intended to protect the “victim” from paying to avoid the “public disgrace” of being named in such a suit.

When Gov. Paul V. McNutt signed the bill. Mrs. Nicholson stood at his side.

“It was the biggest thrill of my political career,” she said. “When the governor finished the signature she turned to me and said, ‘Here’s the pen, do you want it?’ I was so excited now it’s one of my most treasured mementos.”

During the course in the Indiana legislature Mrs. Nicholson’s bill found ardent supporters among the masculine salons. Senator Jesse Wade of Mt. Vernon, speaking on behalf of the bill, said.

“Thousands and thousands of dollars are being taken by unscrupulous packleg lawyers in such cases and it’s up to us to give a woman a chance to see how it will work. It is a start in the right direction and it will overcome the filchers.”

Senator Leo N. Smith of Indianapolis asserted that 999 out of 1,000 breach of promise and alienation of affection suits were nothing but “shakedowns.”

“Let’s eliminate this evil from the good old state of Indiana,” he thundered. 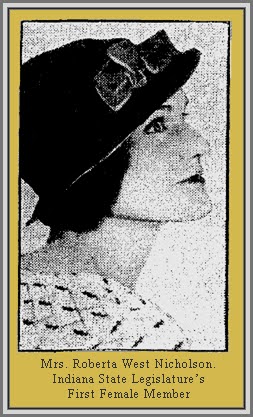 Others dipped into recent history to refresh the minds of the legislators of famous heart balm cases. The all-time high heart balm ever collected was said to have been $450,000 by Mrs. Bertha Cleavenger of Detroit. Mrs. Rhoda Tanner Doubleday, who sued Harold F. McCormick of Chicago for $1,500,000 for breach of promise, was said to have settled out of court for a fancy sum. Ann Caldwell, a Pittsburgh actress, was said to have settled her $500,000 breach of promise suit against a Pittsburgh Millionaire for $50,000. In recent years only one millionaire, Cornelius Vanderbilt Whitney, has successfully fought a million-dollar “balm” suit. It was brought against him by Evan Burrows Fontaine, the dancer. Whitney elected to contest the suit and won complete vindication, after sensational trials.

Support came to Mrs. Nicholson from an unexpected quarter during the period when her bill was bobbing around in the legislative sea Mrs. Virginia Cogswell, 28, of Chicago, who has divorced seven husbands since her first marriage at the age of 16, applauded Mrs. Nicholson’s heart balm bill. Mrs. Cogswell in an interview in Chicago said she had never accepted one cent of alimony from the man who loved her, although some of them were wealthy.

Mrs. Cogswill was quoted as saying:

“I don’t believe marriage should end in financial hangover. Breach of promise and alienation of affection suits are just rackets. I’ve never sued anyone, except for divorce.”

Mrs. Cogswell declared that outlawing of heart balm suits was a stop in the right direction. She added:

“Alimony should be added to the list of outlawed love rackets.”

So Indiana is enacting Mrs. Nicholson’s trail-blazing bill in the realm of affairs of the heart, has set up the principle that there is no property rights to love. For one who loves and suffers the loss of love, there is no sum in human finance to ease the heart. Love should exist for love alone and he who loses should remember that it is better to have love and lost than to have never loved at all. 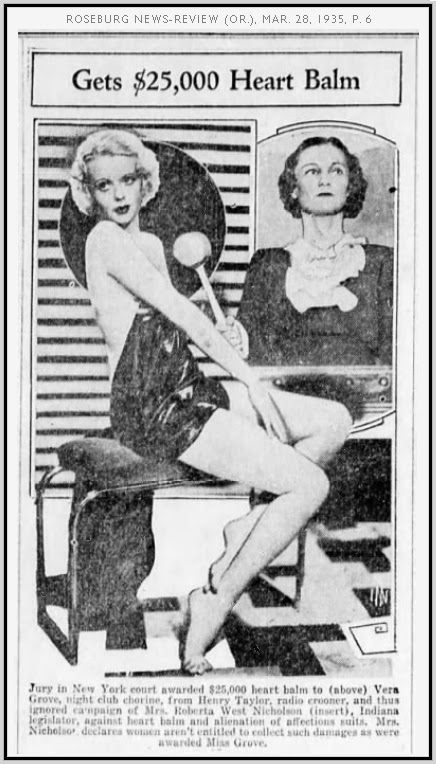 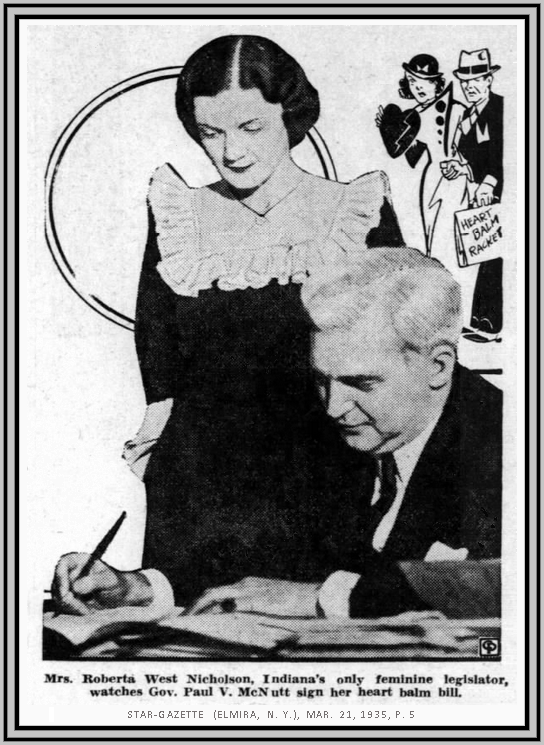 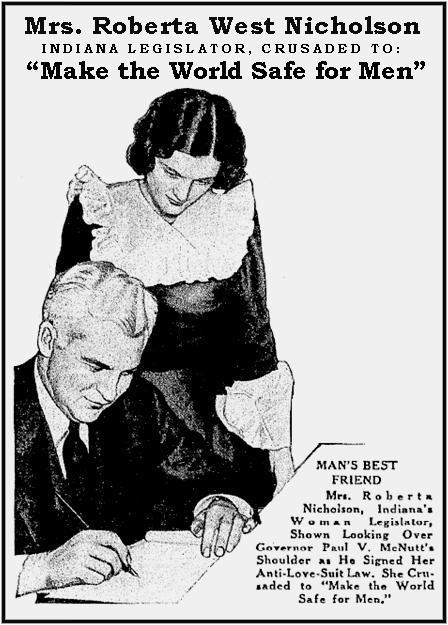 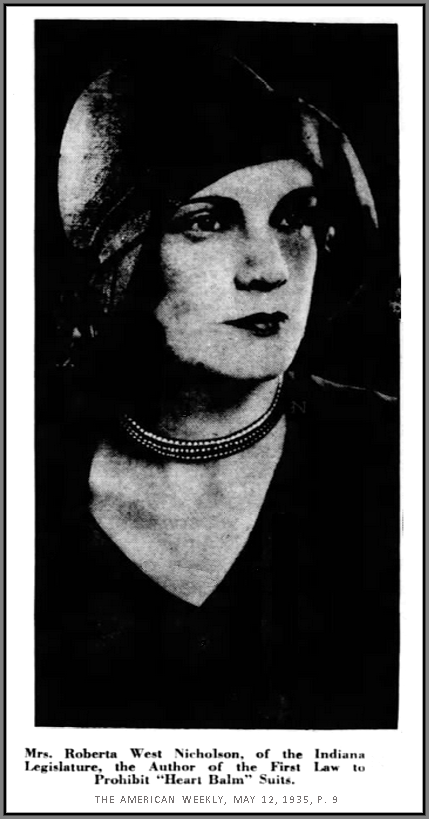