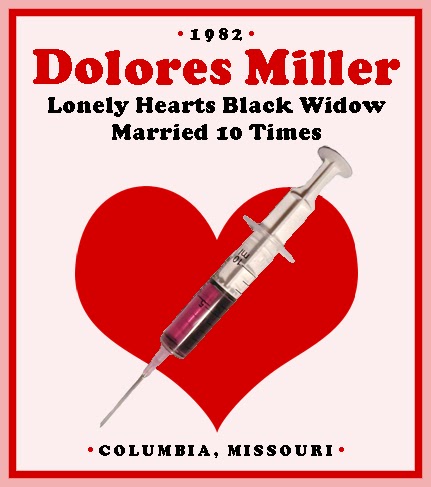 FULL TEXT (Article 1 of 3):  Columbia, Mo. – A woman who reportedly met her seventh [later reports reveal he was the tenth] husband through a lonely hearts club was charged with killing him with an insulin injection less than two months after their wedding.

Dolores Miller, 52, who police said had withdrawn more than $30,000 from bank accounts held by her husband, Erroll L. Miller, 59, pleaded innocent to first-degree murder Friday in his death and was jailed in lieu of $150,000 bond.

Police said they had information that the suspect had been married at least six previous times in other states – including Georgia, Tennessee, Mississippi, Arkansas and south Carolina – and that at least two of her husbands had died.

Miller, who had been hospitalized for a brain tumor but suffered a sudden deteriorization and lapsed into unconsciousness 10 days ago, died Wednesday and Mrs. Miller was arrested late Thursday.

Found in her car and in a room she had rented in a boarding house were $2,500 cash, some controlled pharmaceuticals and a pistol reportedly stolen in Mississippi.

Police Lt. Tom Hudson said Mrs. Miller told officers that she had “injected her husband while he was asleep with an excessive amount of insulin.”

Augusta Thompson, a woman who lived in the same rooming house and met Mrs. Miller for the first time late Wednesday, told police the suspect talked of her husband’s death “as if she was having pot roast for dinner.”

Two weeks later, Feb. 3, Miller was admitted to Truman Veteran’s Hospital in Columbia for removal of a brain tumor.

He recovered enough by March 3 to be taken from intensive care and placed in a private room. Later that day, police said, his deteriorated and he lost consciousness and never gained it before he died.

EXCERPT (Article 2 of 3): Mrs. Miller, a licensed practical nurse, was arrested at a rooming house. Police found newspapers with ads placed by elderly men seeking companionship circled in red ink, leading them to believe she was “planning to set up operations in the Columbia area,” [Sgt. Dale] Richardson said.

FULL TEXT (Article 3 of 3): Union, Mo. – A licensed practical nurse found guilty of murdering her husband by injecting him with insulin as he recovered from brain surgery faces life in prison without parole for 50 years.

Authorities said the Millers met through a computer dating service and were married in January 1981 at Dixon, the dead man’s hometown. Miller was her 10th husband.

“Right now, I just feel like the bottom has dropped out of my world,” Mrs. Miller told reporters. “But I feel there’s a miracle somewhere.”

“I’ll be all right,” she told a friend who stood by sobbing.

Mrs. Miller will be held at the Franklin County jail in lieu of $100,000 bond pending sentencing Feb. 15. She faces the life term for capital murder because the prosecutor did not seek the death penalty.

During the trial, Boone County Prosecutor Joe Mosely told the jury that it should believe a statement signed by Mrs. Miller that detailed how she injected 100 units of insulin into her husband, Erroll “Roy” Miller, 67. miller was recovering from brain surgery at a Columbia hospital.