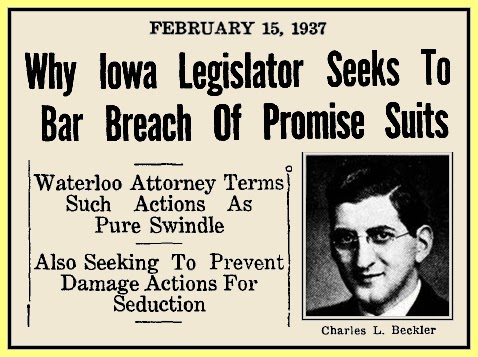 FULL TEXT: Des Moines – Charles L. Beckler, Waterloo attorney and next to the youngest member of the Iowa house of representatives [District 66, Democrat], never has tried a breach of promise suit.

What’s more, he doesn’t want to.

And if the legislature approves the Black Hawk county representative’s proposal, he never will be called upon to try one, for there won’t be any. Neither will there be alienation of affection suits or damage actions for seduction if the woman involved is 21 years old.

In fact any person who files such suits; or even threatens to file them, will be subject to a fine and a prison sentence.

And to round out his plan for reforming Iowa’s social laws – major measure of this nature thus far introduced in the general assembly – Beckler would prohibit naming of correspondents in divorce cases except at the request of the defendant and upon order of the judge.

While his proposal is “reform,” Beckler, who gained his assembly seat by defeating Arch W. McFarlane of Waterloo, 23-year-old assembly veteran, insists he is no “reformer.”

“Breach of promise, seduction and alienation of affection suits,” he declared, “are nothing but legalized extortion in 99 cases out of 100. And usually the 100th case is inspired by revenge.

“These civil actions for damages have provided the means for a vicious racket throughout our country and it’s time we stopped it.”

“If  a woman’s heart can be mended by money, then it seems to me it couldn’t have been broken badly. If money is heart balm, then why do men seldom file suits to get it? Their hearts, it seems to me, are just as subject to breakage as women’s.

“These statutes simply are not fair.”

“That is an example of what I’m trying to wipe out,” he said. “A shyster attorney and a racketeering private detective combined with a woman to bleed young Smith by threatening to expose his indiscretions.

“He lost his wife by divorce. But he also paid and paid until he couldn’t pay any longer trying to protect his family from scandal. Finally he revolted and the lawyer and detective were convicted of extortion.

“Even when such suits are not promoted by racketeers, they usually are inspired by a blind attempt to get revenge and end up by injuring everyone involved.

“Beckler’s proposal to prohibit naming of correspondents in divorce cases is aimed at preventing unnecessary scandal” which more often than not also besmirches husband, wife and children, if there are any, alike.

So far, Representative Beckler has refrained from any house oratory.

“I’m content to visit around and get acquainted,” he said.

His visiting, around, he added “indicates this bill has a pretty good chance to pass the house. I’ve found support for it in quarters I never expected to find it.”