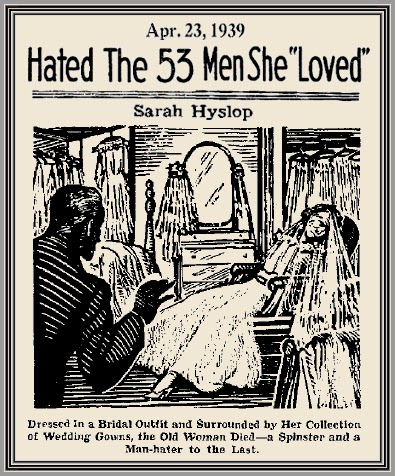 FULL TEXT: In the year 1878 Sarah Hyslop, a nervous beauty of Scottish birth, found herself engaged to be married. The spirited girl could hardly sleep for excitement the night before the wedding was to take place in the little chapel at Leith. On the eventful afternoon she arrived at the church dressed in a bridal gown that was the envy of all the girls. She was happy, everything was working out – and then the sinking feeling came.

The groom had not yet arrived. Minutes ticked slowly by and the organist started playing all his selections over again. Miss Hyslop’s “friends” whispered among themselves, and her father began to look like a thundercloud. At last, when the last guests had comforted her as best they could and left her alone, the “bride” stared wide-eyed into the empty street. She knew she was the talk of the town because her beau had jilted her at the altar, but she just couldn’t cry.

From that hour, until she died the other day [in April 1939], the disappointed girl never wept, according to those who knew her. She didn’t, however, retire from the world to be a sulking spinster. Instead she decided that she would turn the tables on men, and for ten years her trophies were their broken hearts. The jilted girl became a jilt and never missed a chance to hurt others as she had been hurt.

Her scholarly father, an official of heralds and arms, begged her to forget the embarrassing incident. Miss Hyslop turned a deaf ear on him, cashed her dowry, and left the community where she was a laughing-stock.

The cheated bride moved into a town at a considerable distance from Leith, and walked the hills in the evening all alone. She spoke to no one, and did not encourage others to speak with her. The schoolmaster of the town was intrigued by the silent stranger. Her pretty face was like a mask and he wanted to know what thoughts were going on in back of it. He found out, to his disgrace. A chance meeting on the road, and they became friends – and before long they were engaged to be married. The day came, but Miss Hyslop didn’t. She had jilted her first man, and revenge was sweet, as she recorded in her diary. The young schoolmaster was forced to leave his post because of the scandal.

Miss Hyslop, meanwhile, had gone on to new conquests. Through Scotland, England and France she left a wake of broken hopes and wagging tongues. In one year alone she effected 11 revenge matches. In every case she vanished when the bridegroom and witnesses had left the church.

In 10 years, 52 males had fallen to the girl who couldn’t get over her disgrace. But when she threw over the fifty-third man. something happened. He killed himself. And  then, too late. Miss Hyslop realized that she loved him. Her first romance that had been blighted in her home town was a schoolgirl affair – it was the disgrace that she minded, not the loss of the man who left her in the lurch. The last mistake of hers was different. She knew her fiancé cared deeply for her, and she felt herself returning his affection. The habit of years was too much for her, however, and the rankle of her first wedding-day still was present. She stayed away from the first wedding she ever wanted to go to, and cold hatred alternated with despair. To avenge the insult from a man she didn’t love, she walked out on a man she did.

The next day she heard the awful news. He had shot himself because of her.

Miss Hyslop moved to Nice, and in that gay resort shut herself away from everybody – even her servants. The fortune left to her when her father died was enough to keep her going for the rest of her days. She stayed locked up for 50 years. In her neighborhood the crabbed old woman was known as the “mad Englishwoman” and the “man-hating tigress.”

She hired only confirmed old maids, who had to vow that they would never marry, to serve her. They never could come into her room when she was there. The servant had to knock at the door when a meal was ready. Then the mistress would scurry into an adjoining room, and not come out until three more laps indicated to her that the servant had gone. Her reason for this curious procedure was not explained even in her diary, which told in detail most of her strange history.

When the servants found her door locked the other day and were unable to get in they called the gendarmes, who broke down the door. Miss Hyslop was sitting in a chair, primped up in a bridal gown, and plainly dead. Around her, covering the bed, tables and chairs, were 52 other bridal costumes.

Every day she had worn a different wedding costume, and pirouetted in from of the mirror as the bride-to-lie of the man for whom that dress had been intended. Every time she had laid plans to disappoint another man, she had bought another trousseau, and kept them all as a tally of her “spiritual husbands.”

But she wanted to die in only one of them, her notebook went on – and so when she know her days were about up, she put on the dress meant for her suicide suitor, and stayed in it until she died.

One other mystery she did not explain in her diary, and that was, where she got her money. Miss Hyslop had come into a small fortune at the death of her father, but not enough for her to live on so many years and leave the sum she did.

Police found that the man-hater had left, a will bequeathing considerable property to her servants, on condition that they do not marry, a condition they all have accepted. It has been suggested that the beau who killed himself willed her everything he owned, but if so, the secret has died with the old crone who collected bridal dresses with a vengeance. 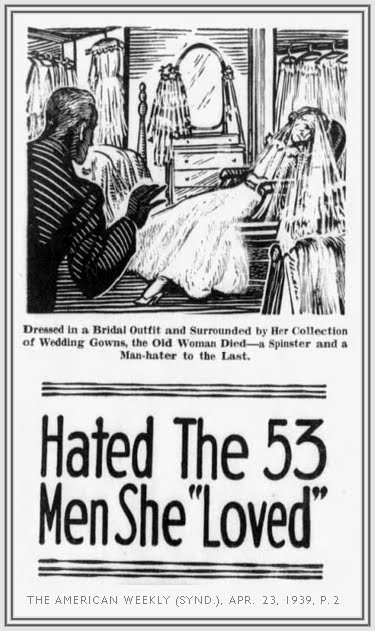