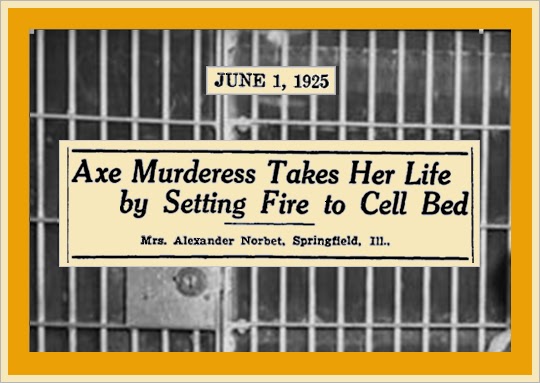 FULL TEXT: Springfield, Ill., May 31.—Mrs. Alexander Norbet, 51, confessed slayer of her husband, committed suicide by setting fire to her bedding in the county jail here today, making good her declaration that she would never enter a prison.

The bedding was. burning; fiercely before Mrs. Norbet uttered her first outcry which brought two guards to the scene. They extinguished the flames and the woman was rushed to a hospital where she died.

Inhaling of fumes, physicians stated, was the immediate cause of death, although she was horribly burned about the body.

Mrs. Norbet, who killed her husband with, an axe several weeks ago, had been carefully guarded. She had made repeated requests for matches which were denied her.

The matter of how she got the match is being investigated by the authorities.