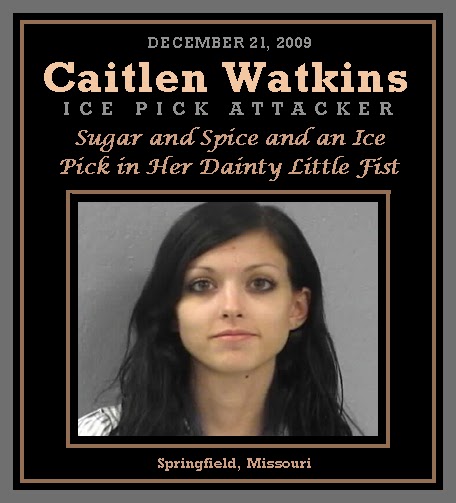 On December 21, Caitlen Watkins, an 18-year-old Missouri girl, with boyfriend in tow got upset over not getting the parking spot she wanted at the Springfield shopping center. An argument ensued and, getting out of her car just outside the Entertainment Store, found it expeditious to make her pint by means of piercing her controversial interlocutor Lonnie Sowersby once, twice, thrice, four, five and for a sixth time before onlookers yanked her off her victim. She succeeded puncturing his kidney before she was interrupted at which time she jumped back into her car and fled. Witnesses got her license plate and she was promptly arrested.

The court process dragged on for over two years until finally on March 6, 2012, she made a plea deal and pleaded guilty to a 2nd Degree Assault charge. [Robert St. Estephe]

[Sources: “Teen girl charged in ice-pick attack over parking spot - A Missouri teenager is accused of stabbing a man with an ice pick in a dispute over a parking spot.” AP, Dec. 21, 2009;  “Woman Pleads Guilty to Stabbing Man for Taking Parking Spot,” KOLR10 Newsroom Mar. 6, 2012]