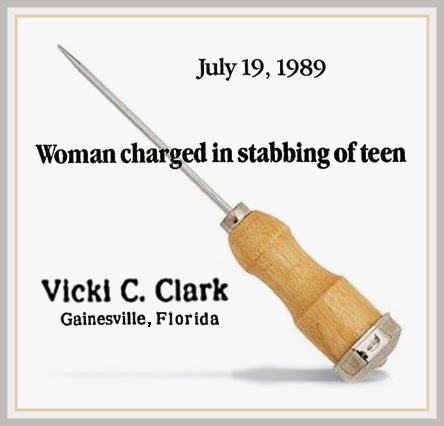 FULL TEXT: An argument late Monday night among three young women ended with attempted-murder charges being filed against an 18-year-old who may have used an ice pick to stab a 17-year-old in the chest, causing her lung to collapse.

The victim, who police would not name because of difficulty contracting her relatives, was identified only as a 17-year-old girl from out of the state. Police said she walked to Alachua General Hospital after the stabbing, which occurred in the 500 block of NW 8th Street.

According to Gainseville police, Vicki C. Clark, 18, apparently yelled a name, and the 17-year-old took the the yell as an insult or challenge and responded in kind.

As an argument developed, police said Delilah Lavon Wallace, 18, hit the 17-year-old with a belt, and when she turned to defend herself, Clark attacked her with  an ice pick or a similar instrument.

Police were told about 1 a.m. Tuesday the victim was in extremely critical condition, but she improved and was listed in fair condition later in the day.