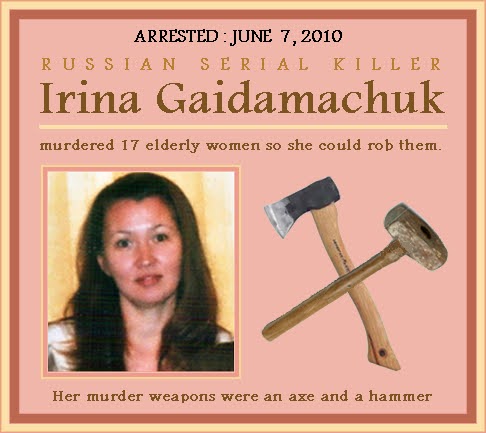 FULL TEXT: A court in the Russian city of Yekaterinburg has sent serial killer Irina Gaidamachuk to prison for twenty years. Gaidamachuk, 40, killed seventeen elderly women so she could rob them.

Gaidamachuk attacked her victims in the Urals region pretending she was a social worker so they let her into their flats. Once inside, she attacked the women with an axe or hammer. The first murder was in 2003 and Gaidamachuk was not detained until June 2010. She confessed.

The investigation was troubled by the gender of the perpetrator; the possibility of a female killer was not considered until a woman survived. After the lone survivor’s account, police still considered it possible the killer was a man dressed as a woman. Innocent woman Irina Valeyeva was arrested and confessed. 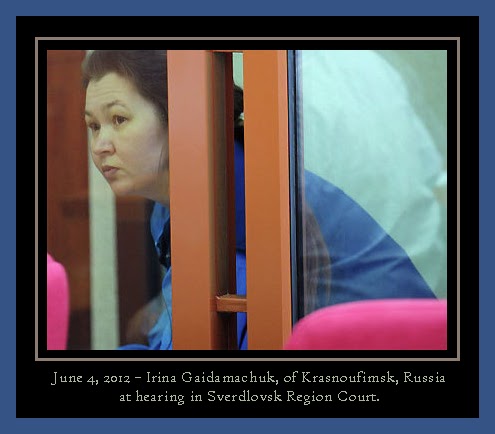 More than 3,000 people were questioned before Gaidamachuk was caught. She changed tactic for her final victim, Alexandra Povaritsyna, 81, opting to pose as a decorator. Police followed up descriptions from neighbours of the bogus tradeswoman. The youngest victim was 61 and the oldest 89.

Gaidamachuk was deemed sane. She said her motive was obtaining money for vodka. She must pay expenses for her prosecution.

“I lived with her for 14 years but never suspected anything” said Gaidamachuk’s husband, Yury. Yury has since begun a new relationship. Irina has two children.

EXCERPT: The criminologists who worked at the scene of the fifth murder noticed an interesting detail: on the wall of the entrance, next to the entrance door of the deceased, the figure "5" was presumably displayed with a cigarette butt. Later, neighbors recalled that the five had appeared three days before the murder. Then the investigators drew attention to the fact that the rest of the victims of the maniac were “numbered” with the number of the house or apartment where they lived: they noted that the offender may be acting according to some system: for example, the seventh victim was killed in house No. 7, the eighth - in the house number 8, the ninth was found in the apartment number 9. [Dmitry Antonenkov, “"Krasnoufimskaya maniac" kicked out journalists In Yekaterinburg, the trial of Irina Gaidamachuk, accused of 17 murders of pensioners, began,” («Красноуфимская маньячка» выгнала журналистов В Екатеринбурге начался суд над Ириной Гайдамачук, обвиняемой в 17 убийствах пенсионерок), Gazeta (Russia), Feb. 13, 2012]

2005 – investigators believed that the killer was a disguised man.

2005 – Irina Valeeva was even detained in this case in Nizhny Tagil.

April 2008 – a resident of Verkhnyaya Tura has been interrogated for involvement in these murders. During the investigation, she wrote a confession, but was confused in the testimony. The woman then told investigators that three police officers from Nizhny Tagil forced her to confess.

Summer 2011 – 3 police officers were convicted of forcing the April 2008 confession. They were found guilty of abuse of office and official forgery and received from 3 to 4.5 years in prison, one of them was suspended.

Arson – In addition, on three occasions she tried to cover up the traces of the crime and set fire to the apartments in which the attacks were carried out, but the fires were put out.

Email ThisBlogThis!Share to TwitterShare to FacebookShare to Pinterest
Labels: Female Serial Killers, Give 'em the Axe