Krista Jane Heflin’s credo: “I am THE Femitheist, the creator of the movement that is Femitheism, and hopefully, the future Mother of the New World.”

***
QUOTES from The New Era of Feminism

***
It is time for the End of Men, and this goes far beyond mere castration. We will wipe them from the Earth, half of the entirety of our population, for the greater good of the least offensive side, and for their own good as well. [Femitheist Divine, “Re-defining the World: The End of Men,” Website: The New Era of Feminism, June 14, 2012]
***
I question the use of the word “humanity” regarding men.
…
For instance, if humanity were to undergo… say… a transformation of the short-term solutions sort. It would be sensible for 1-10% of the global population to remain male.
…
This practice of castration, Breeder usage, and sample collection [of semen] would continue until it was scientifically possible to create female children entirely from the organic material of female adults. Then, the existence of men would no longer be necessary at all. Long-term solution implementation would follow. [Femitheist Divine, “Women Are More Important Reproductively + More,” Website: The New Era of Feminism, July 6, 2012]

***
Women MUST and WILL have equality, and this is the ONLY way to achieve TRUE equality. The testicles of all males, which produce the majority of their testosterone, are the primary cause of their violent behavior. The testicles also attribute greatly to many of the health problems men experience later in life (such as prostate cancer and, of course, testicular cancer).

~:The Solution... International Castration Day.:~  It is my belief (which I consider factual based on my research) that all men SHOULD be castrated. Not only for their own safety, but for the safety of all innocent women and children. [Femitheist Divine, “All Men Should Be Castrated? - International "Castration Day,” Femitheist Divine, April 16, 2012]

***
Feminization: Further feminization must reach beyond natural means, into the cultural aspect of what is currently known as the “male”. Men must be made to know at an early age that they are inferior and increasingly worthless, as I have explained before, and they must be taught to live as women do. … Wearing women’s clothing, sitting as women do, acting as women do, et cetera. This will benefit everyone greatly, especially women. It is entirely justified because it is necessary. [Femitheist Divine. “What is the Truth of Equality? - How Do We Achieve It?” Website: The New Era of Feminism, April 28, 2012]

***
People, regardless of gender, who are born with either a mental disability or a physical disability, that is of such a degree it has been socially proven to hinder normal common functions, should not be allowed to suffer through a life of misery at the hands of care-takers and or sitters. … The simple solutions for this would be to: A)    Test for hindering disabilities, and upon finding one, have the child aborted at the mother’s permission (which should be greatly encouraged or even lawfully mandated). B)  Have any child who manages to be born in a way that evades abortion euthanized as soon as possible, in order to keep them from straining not only society, but their own family as well. Men should take no roll [sic, “role”] in this decision.

And, they should have no interaction with the process of aborting or euthanizing the handicapped child; for multiple reasons: A man performing an abortion of this sort, which slightly reflects a Spartan-esque ideology, would be doing nothing more than posturing and inflating their masculinity, as they are then, by extension, the official executioner of a life which they did not birth, and physically cannot birth. Only women should be the official “executioners” or “doctors” who perform these ceremonial procedures, because, if a woman were to do it, it would be an act of kindness by the very inherent nature of that which is female. [Femitheist Divine “Women Are More Important Reproductively + More,” Website: The New Era of Feminism, July 6, 2012] 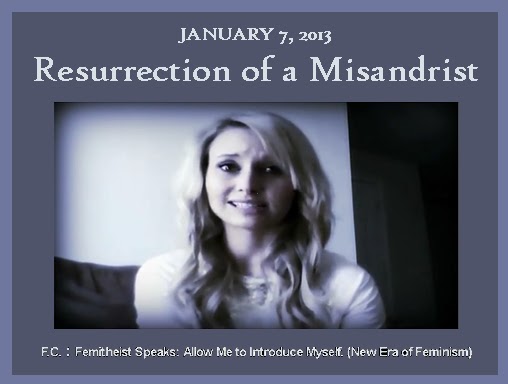 Image from: F.C. : Femitheist Speaks: Allow Me to Introduce Myself. (New Era of Feminism)

After her resurrection from the dead (her fake suicide) Femitheist Divine (Krista Heflin of Minneapolis) has re-energized her efforts and is offering a solution to the growing problem of men and women’s awakening to the nightmare of authoritarian Marxist-feminism. Her program? Censorship, the traditional tactic used by control-freak authoritarians. On January 7, 2012 she placed a video online to promote her new petition to Google/Youtube demanding that all men’s rights content be censored. Here is a sample from the petition text:


EXCERPT: The Men's Rights Movement, while claiming to be for the betterment of both sexes, wishes for nothing more than to diminish the accomplishments of women, to vilify women, and to set women back by harassing them into silence, along with placing them in danger through their actions, which they openly admit are illegal.

Please sign this petition in order to have anything and everything that is Anti-Feminist and Anti-Woman, and also related to advocacy of the "Men's Rights Movement", defaulted as terrorism, or promotional of hatred and violence, so that the content may be flagged and removed from YouTube as it should be. Or, if nothing else, to send a message to the MRM, so that they know that this conduct is not appropriate.
[Krista Heflin (Minneapolis, MN), “Google Inc., YouTube LLC: Categorize the MRM as flaggable forterrorism/promoting hate on YouTube.” change.org, Petitioning Google Inc., YouTube LLC, Jan. 7, 2013]

The Heflin creature is not crazy. She is logical. All her views flow logically from marxist-feminism. Yes, it is a paranoid philosophy which appeals to sociopaths, but that is not actually crazy. Genocide is implemented by people who are clear-headed and can get things done, not by schizophrenics,

I respect the Heflin creature. She is correct in saying she and her compatriots are the future of feminism. She combines bioethics (eugenics, euthanasia, death panels) with marxist utopianism and ordinary female entitlement. This fits the “progressive” mold – and attitude which promotes the belief in future rewards in a utopian paradise and is willing to use genocide to get there.

Respect is not assent. One should always respect one’s opponent when that person is seriously intending to harm you. Gaia is a dangerous goddess: she is the greatest of all known serial killers (volcanoes, earthquakes, hurricanes). We should respect her and respond with appropriate self-preservation tactics: namely, promoting truth, morality and good character. (Robert St. Estephe) 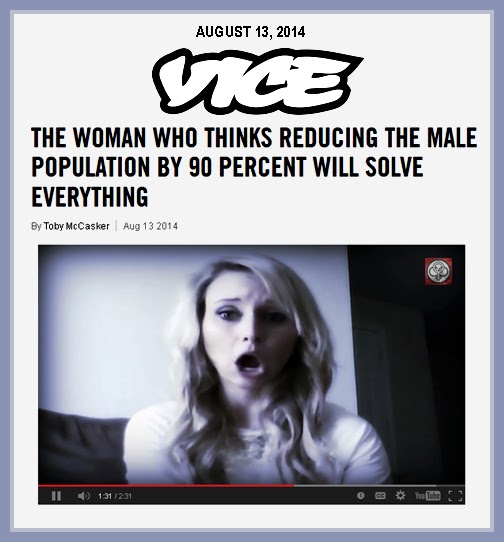 Krista Jane Heflin was interviewed for an article in Vice which was published on August 15, 2014. In the piece Ms. Heflin’s name is not mentioned, merely her self-conferred honorific, “The Femitheist,” yet the article does identify her career aspirations by stating she is a “criminology student.”

Following is a brief excerpt from this nicely informative interview, which is well worth reading for its insights into the utopianist egalitarian mindset:

Toby McCaster (Vice): But don’t men have value beyond breeding?

Krista Jane Heflin (“The Femitheist”): If technology has not advanced to a point where labour can be done without men, the few men that are necessary for said labour will be allowed to work on the outside of the reservations to complete whatever tasks necessary – if they wish.

Krista Jane Heflin (“The Femitheist”): Not as slaves, simply as workers performing a duty, in the same way workers today do. Only without the need for monetary reimbursement as they would have no need for such a thing. This would be highly monitored and regulated.

[Toby McCasker, “The Woman Who Thinks Reducing the Male Population by 90 Percent Will Solve Everything,” Aug. 15, 2014] 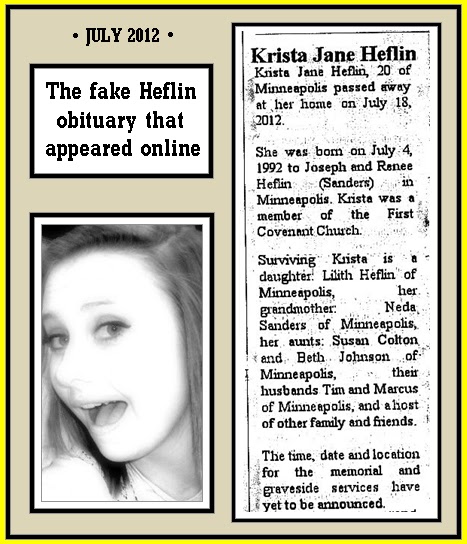