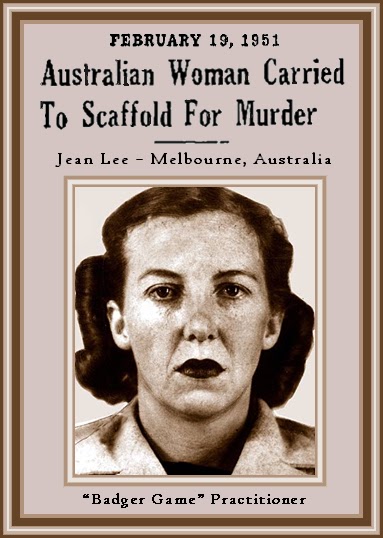 Jean Lee was “an Australian call girl who had become famous with GIs during world war II [and] went into the badger game in the late 1940s with her pimp and lover, Robert David Clayton.” [Jay Robert, Nash, Look For the Woman, 1981, Jay Evans & Co., p. 249]

FULL TEXT: Melbourne, Australia,  Feb. 19 — A young divorcee, doped with sedatives, was carried to the gallows today, for the torture murder of an aged bookmaker. She was the first woman to be hanged in Victoria-State in more than half a century.

The Lee woman, who had been raging in her cell for the past few days, was given sedatives Sunday night. She appeared unconscious when borne to the scaffold, Clayton and Andrews, who two hours later followed their female companion to the gallows, called goodbye to each other a few seconds before they died.

The trio, all from Sydney, were convicted of murdering 73 year-old William Kent in his boardinghouse room No. 7, 1949. Trial testimony showed they tortured him to learn where his money was hidden, then beat and strangled him.