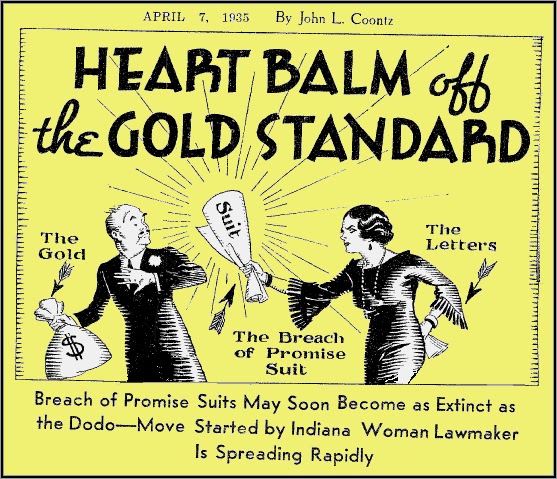 FULL TEXT: STOP the heart-balm racket of love the racketeering, plundering business off the gold standard! Take the heart out of this legalized form of masculine blackmail!

Millions of dollars are poured out yearly by mulcted males to satisfy allegedly outraged feminine feelings and assuage; the grief of broken hearts. Simply because of an archaic law. In olden days the maiden disappointed in love sought the cloister, in tears she drenched her eyes; in prayer she steeped her soul, seeking to forgive and forget, sighing with the storm that racks the woods as one other storm had racked her life. Now she gets a lawyer, hies herself to court, exhibits such parts of her heart as are left to a sobbing jury and walks off with sums ranging from $5000 to $500,000.

LEAVE it to the women themselves to correct this parasitical evil. Headed by women’s clubs and female legislators throughout the United States, the war against the unscrupulous members of the fairer sex is coming cut into the open and woe is the breach of promise suit. So widespread is the feminine assault that prediction is made breach of prom be suits will, before long, be as ' extinct as the dodo.

Miss Roberta West Nicholson, of Indiana, sponsor of the anti-breach-of-promise legislation in that State, opines that it is about as impossible to heal a broken heart with money as it is to make an egg stand on end. Breach of promise suits largely degenerate into extortion suits against unwitting, unsuspecting and wealthy males.

The law permits breach of promise action on four counts. The jilted one had high hopes and expectations of great, and enlarged life, of being happily domiciled and well supported. Failure to keep the marriage promise disrupts all of these expectations and throws the true course of life out of balance. Or the innocent one has suffered mortification and humiliation at the breach of word; her feelings are outraged and, as a consequence, compensation may be had. Again, she has bought her trousseau, laid sweet; and lavendered things in her hope chest, linen and silks that may never be taken out again, so therefore she may be reimbursed for them; or she may have been seduced.

It is interesting to note in connection with the law, as one astute critic points out, that you can't lose something you never had. In marriage the marrying parties take pot-luck with each other. “For better or worse” reads the rubric.

Humiliation and mortification are, indeed, aftermaths of an unfruited romance. But what woman of delicate feelings wants to parade these things before the world? And if she does parade them before a court and her fellow sister; and townspeople she just about forfeits of all delicacy of feeling and tender memories of mayhap the happiest years of her life. Really hurt creatures hide their hurts Instead of parading them before the eyes of the world and trying to capitalize on them.

And the hope chest. Well, the law permits the jilted maid to keep the engagement ring and such other gifts from the heartbreaker, more often than otherwise sufficient compensation, for the outlay in the trousseau-lined box. As for seduction, that can be taken care of through criminal statutes.

Heart balm originated somewhere around the dawn of history, when cave-dwellers tramped the forests of the world swinging clubs and bringing home to the female of the species the kill of the day. 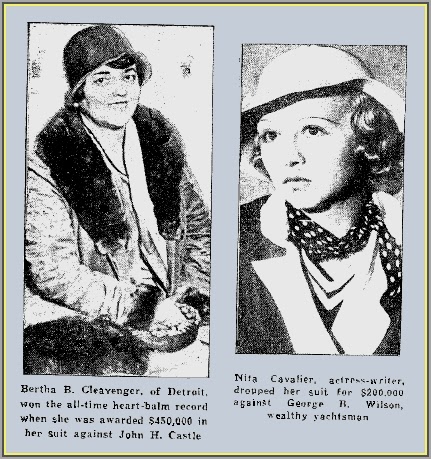 In the old cave days the father of a family had numerous daughters, even as we do today. But, the chances of getting them married off was not quite so good. Brave stalwarts that would make good matches for the cave maidens hunted in the forests and, quite often, succumbed to the tusks of the wild boar, the rip of the saber-toothed tiger, snakes and other wild life.

No men, no marriages; the daughters a drug on the market. So the custom arose, in the field of competition to outsmart the other, for a father to offer something with his daughter. Just to outsmart Cave Dweller No. 2. Cave Dweller No. 1 would offer along with his daughter a nice cave for her prospective husband to live in. You got the house idea, the dower or the dot of today.

But sometimes all did not work so well. The newlyweds did not get along – as newlyweds even today have a habit of doing – and pretty soon daughter was back under papa’s cave roof and the newly made hillside cote empty. Whose was it? Should it revert to papa with his daughter? Or should his erstwhile son-in-law retain it? Disputed possession, a few clubs, the calling of the clans and a fight. The basis for modern damage in heart cases.

Down through the ages this compensation traces through Roman law into English law, taken from the Roman. And here it is not remarkable to find the King’s bailiff and other officers forcing “specific promise” to marry. The girl could compel the man to carry out his offer of marriage. About the middle of the eighteenth century this practice was abolished, but there grew up in its stead the common-law practice of punishment for breach of promise — damages for recalcitraney. This action was carried across the Atlantic by the English settlers of America.

The Greeks "have a word for it”; the Americans “have a way for it” – that is, a way to collect money under this law.

“Actress Sues Rich Clubman for $100,000,” reads a headline, and the battle of balm is on. The clubman and the stage beauty made the rounds of Broadway’s gayest night, clubs and landed home some time in the early morning. Certain things were said, as things will be under the circumstances, and the gate to golden purlieus of balm are open.

The list of balm collectors is open to all who wish to read. Such suits are pulled out into the open and fill the front pages of newspapers. Not much is needed to make them stand up. There is the case of Minnie Marks vs. Shy Mayer in Oklahoma. Minnie and Shy met for the first time in June, became engaged in July and in August parted. Shy, who was not shy, became shy again. The court gave Minnie $5000 for her anguished thoughts and feelings.

In California it cost James Sanhorn $15,000 to retrieve his word given ten months earlier to Mae Beall Veall, Sanborn was some fifteen years older than the lady of his affections or nonaffections, a fact which added to his troubles. A sobbing jury gave the distressed lady $25,000. She was 48. This was later cut to $15,000 by the Appellate Court, which, at the same time, affirmed the judgment.

These are simple affairs, however, compared to that of Ableman vs. Holman (Wisconsin). Edith Ableman and Gus Holman had love for each and became engaged. After about four months Gus withdrew his promise of marriage on the conclusion that he had spoken too hastily. 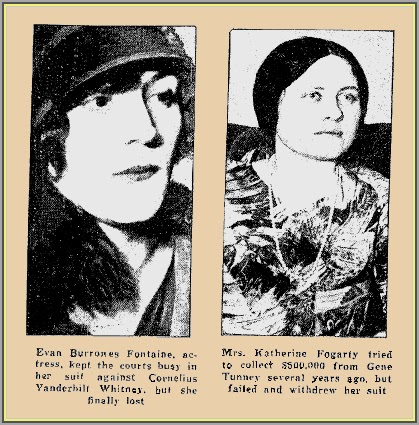 In the testimony that followed Miss Ableman testified that Gus had ever borne himself to her “as a perfect gentleman”; that no other tender of marriage had been made and that, she had sold, with Gus’s approval, his engagement. ring for $275 and pocketed the money. Further, it was brought out, she had married a man “far better” in her estimation than her former lover. Yet. despite all this testimony favorable to consideration for Gus, a verdict was rendered against him in the sum of $15,000. Later the Supreme Court of the State cut this to $4000 with the Solomon-like counsel:

“Other things being equal, it is much more desirable to be a rich man's wife not only so far as social position is concerned, but as far as her personal comfort and pleasure are concerned.”

THE all-time heart-balm collection palm goes to Bertha B. Cleavenger, of Detroit, Mich. Mrs. Cleavenger ran a boarding house. One of her boarders was John H. Castle. As a laborer Mr. Castle earned about $6 per day. On the side he dabbled in real estate at the instance of Mrs. Cleavenger, who assisted him by investing some money of her own in the enterprise. Castle prospered. In time he came to be worth several million dollars. Then he married – but not Mrs. Cleavenger. In the breach of promise suit; that followed a jury of eight women and four men handed Mrs. Cleavenger an award of $450,000.

Mrs. Rhoda Tanner Doubleday, suing Harold F. McCormick for $1,500,000, got an out-of-court settlement that Dame Rumor says ran to big figures. Gene Tunney surrendered a nice bit of his pugilistic earnings to Katherine King Fogarty, of Texas. When she came back for more he, instead of she, scored the “knockout.”

Evan Burrowes Fontaine, former Follies beauty, now a dancer in a Philadelphia night club, asked $1,000,000 of “Sonny” Whitney a few years ago. Sensational charges flew and scandal reared its hydra head, but Whitney stuck to his guns and won.

TOO often heart-balm cases degenerate into straight blackmail cases. Legal authorities point, out that more of these cases are settled out of court than ever come to trial in them.

It is not necessary for a man to offer marriage in order to lay himself open to a breach of promise action. He has only to write something indiscreet, in a missive to his charmer and what he writes need not be in a romantic vein. Far from it. He can say something about his “old man” being far from his ideal; something uncomplimentary regarding his boss. This, held over his head in a breach of promise action under contemplation, can make the scion of an old and respected family of wealth shell out a neat bag of hush money.

Strange as it may seem, women seeking heart balm fare better with male juries than with feminine jurors. There is a psychological reason for this, perhaps. Men understand men; women, women.

To all men beauty in distress is the victim of unscrupulous members of their own sex. A woman never leads a man on; never lays a trap for him. A few tearful protestations before a male jury and an award comes in that means economic Independence for the injured until death. Women, somehow, take a different viewpoint as to motives, if any, of their sex. They are pretty quick to analyze clearly and succinctly the stake their “sister” has in a breach of promise case. Their intuitive sense is not, long in sifting out the shallow reasons from the true reasons.

Breach of promise action is not alone confined to the gentler sex. The male members of society may bring action for violation of promise to marry just the same as female members. As a rule, however, the innate chivalry of man toward womankind inspires him to let her have her way, to forget and let, pass any wrong heaped upon his head by a. mistake of hers in placing the affections of her heart.

Length of time apparently has nothing to do with the ability of a plaintiffs to collect in a breach of promise. There are cases on record where the parties had met and known each other scarcely more than a month before the ground had been prepared for a breach of promise action. And neither is it necessary for an extended courtship to take place or anything like deep protestations of love for a party to receive damage.

Many students of social welfare and relations believe present laws are archaic and nothing more than weapons to enforce revenge, retaliation or collect a nice stipend for the enjoyment of life. That the racketeering should be stopped is the belief of many lawmakers and, with Indiana leading the way, Illinois, New York and Pennsylvania Legislatures may soon be considering revisions of their statutes that will take heart balm off the gold basis.