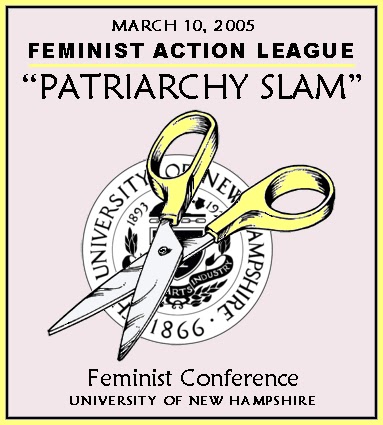 On May 3, 2005 at University of New Hampshire an organization called Feminist Action League held a conference called “Patriarchy Slam.”

One member of FAL was quoted as saying that: “Ninety-nine percent of sexual perpetrators are men. They are the root cause of the rape and oppression against women.”

“Hello, my name is Mary Man-Hating-Is-Fun. I am 23 years old, and I am what a feminist looks like. Ever since I learned to embrace my feminist nature, I found great joy in threatening men's lives, flicking off frat brothers and plotting the patriarchy’s death. I hate men because they are men, because I see them for what they are: misogynistic, sexist, oppressive and absurdly pathetic beings who only serve to pollute and contaminate this world with war, abuse, oppression and rape.”

The 40 women in the audience, many wearing scissors around their necks, laughed and clapped, then broke into a light-hearted song about castration.