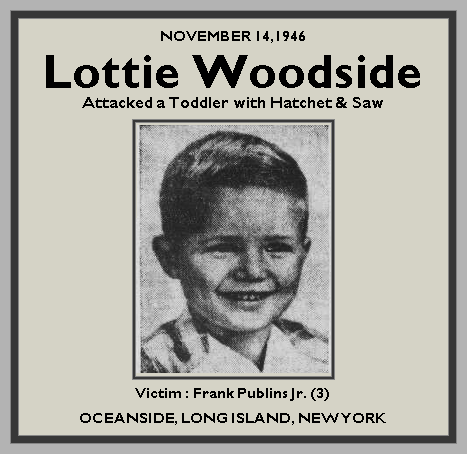 FULL TEXT: Mineola, N. Y., Nov. 14 – A 51-year-old mother was charged by police today with luring a three-year-old boy neighbor in her cellar and madly attacking him with a hatchet and a saw because “the kid got my goat.”

The boy, Frank Pubins, jr., his skull fractured, his body hacked and his left leg and left wrist partly sawed through, is near death in a hospital.

Mrs. Lottie Woodside, the woman, was charged with first degree assault, Nassau county District Attorney Frank Gullata said yesterday in making public details of the attack which allegedly took place Tuesday. The cases was not made known until the woman was booked.

He said Mrs. Woodside, mother of a nine-year-old boy, had been under treatment for several years for a mental ailment.

Mrs. Woodside took the boy to the cellar, promising to show him the playroom there. She then fractured his skull and hacked his body with the hatchet, and started to dismember him.

She left the boy unconscious in the cellar, where her son, Robert, found him shortly afterwards. Robert, afraid to talk to his mother, told his father, Charles, who drove the boy to the hospital.

Police found a bloody hatchet Tuesday night. After an operation on the boy’s brain yesterday, doctors took off emergency body bandages and found saw marks. Returning to the cellkar, police found a saw.

Gullatta said Mrs. Woodside wrote a note to her husband.

“I couldn’t stand it any more – the kid got my goat,” Gullatta quoted the note, adding it said she was sorry she had to leave him and their children, and said “good-bye.”

Gullatta traced the trouble back three years when a brother of Frank left a coat and a hat in the Woodside’s front yard. Mrs. Woodside buried the clothing under rubbish in her rear yard. Taken to court, she received a warning, Gullatta said.

Email ThisBlogThis!Share to TwitterShare to FacebookShare to Pinterest
Labels: Give 'em the Axe, Torture