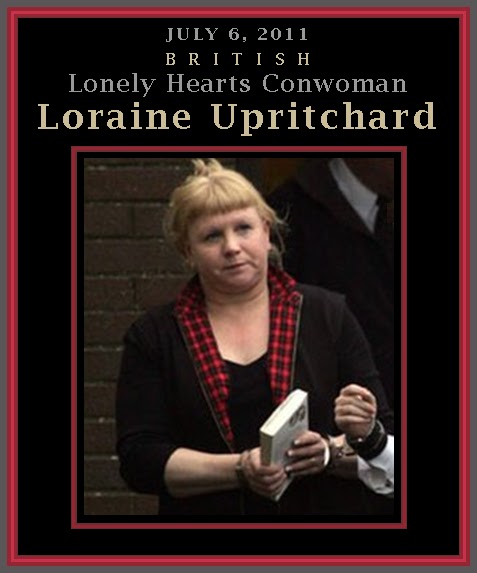 FULL TEXT: A woman from Surrey who befriended men through lonely hearts columns before fleecing them of their savings has been jailed for three years.

Loraine Upritchard, 53, of Brighton Road, Horley, was told by Judge Richard Brown that she was "a wicked and despicable gold-digging con artist".

She had admitted two counts of fraud and four of stealing cheques.

She had failed to appear for sentencing on Tuesday, saying she had chest pains.

The court was told how Mr Saunders had placed an advert online in 2007 saying he was looking for a female companion.

Upritchard, who told him her name was Danielle Ryan, answered the advert, later moving in to his flat and borrowed £1,000 in February 2008, followed by a further £10,000 soon afterwards.

She gave one of the reasons for needing the money as medical treatment, saying she would pay it back from her aunt's will.

The court heard how Upritchard also stole and wrote out a number of cheques from the middle pages of Mr Saunders' cheque book, although these were not honoured by his bank so he did not lose any money.

She was sentenced to three years for each offence, to run concurrently.

Upritchard avoided jail four years ago when she was sentenced to an 18-month community order at the same court.

She had pleaded guilty to swindling £2,200 from Eastbourne widower Leonard Hesling, then 67, whom she met through a lonely hearts advert that she had placed.

Mr Hesling hired a private detective to find evidence against Upritchard after she failed to honour two IOUs.

Police said at the time they believed she may have obtained as much as £100,000 from men she had befriended.

Sentencing her, Judge Brown said: "Your aim is to fleece as much money as you can from lonely old men and hope they'll be too embarrassed to report the matter."