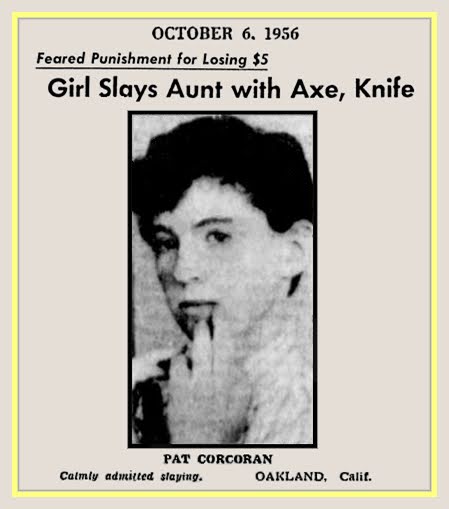 FULL TEXT (Article 1 of 4): Oakland, Calif., Oct. 6 – Formal murder charges were filed against Patricia Corcoran, 12-year-old schoolgirl from South Dakota who hacked her aunt to death with a butcher knife and axe because she feared punishment for losing a $5 bill.

The youngster was arrested Friday night after she calmly admitted the bloody slaying of Mrs. Guy Bruce, 55, in the kitchen of their modest Oakland home.

She said she also had planned to kill her uncle, but gave up the idea when he entered the back door and found her standing on a washing machine with the bloody axe in her hand.

Deputy District Attorney W. Sayer Snook said a formal complaint had been filed yesterday charging the girl with murder and said arrangements were being made to arraign her in Municipal Court where she will mandatorily be transferred to the Juvenile court.

Mr. Snook said the girl had been given a preliminary psychiatric examination by Dr. Douglas Kelly, but that the findings on her mental health condition would not be divulged until a more complete check-up is made.

She said she brooded over the matter during her classes at Bret Harte Junior High School and during a later catechism class at St. Jariath’s Catholic Church.

When she arrived home, she said, she got a hand axe from the garage and concealed it behind her back while she waited for Mrs. Bruce to return from her job at Oakland Naval Supply Center.

She said she exchanged “hi” greetings with her aunt and then when the older woman’s back was turned she struck her on the head with the axe, when Mrs. Bruce fell unconscious, the girl grabbed a butcher knife and stabbed her repeatedly in the back.

Patricia is one of nine children of Mr. and Mrs. William J. Corcoran, who live on a farm near Mitchell, S. D. She came here several months ago to live with her aunt and uncle.

At Mitchell, the girl’s mother was shocked by the news and said her daughter “must have been desperately homesick.” 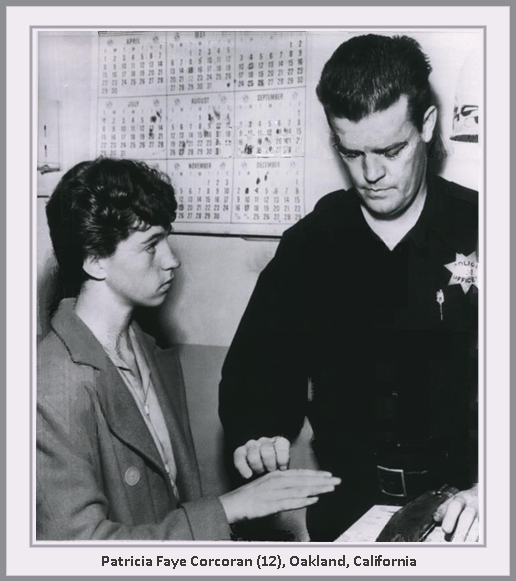 For the first time in her 12 years, Patricia Corcoran was away from her parents and eight brothers and sisters who were tier playmates and companions.

Instead of life on the farm near Mitchell, South Dakota, with its broad spaces but crowded home, the girl was “transplanted” to Oakland where her aunt and uncle Mr. and Mrs. Guy Bunce, of 3462 Rhoda Ave. provided love and care.

It was unusual for this childless couple to have a a child in the house. It was strange for the girl to be the only child. There was much adjusting to do.

The girl never made it. Thursday evening in. a fit of frenzy this girl, who won’t even enter her teens for six months and who has a child’s figure despite a woman’s height, hacked
her aunt — her foster mother — to death with a hatchet and two knives.

Ironically, she was sent here from the farm by her parents who felt that she would have vastly greater opportunities in being reared by the foster parents.

In South Dakota she was apparently a normal child.

Here she is a child murderess.

Psychologists and psychiatrists at the Alameda County Juvenile Hall will have to try to solve the riddle of why? … Why? … why? … this apparently normal 7th grade girl should have turned into Alameda County’s youngest murderess in a slaying that has little equal in bloody brutality.

Was it because she had lost a $5 bill and was brooding about it? That reason is too meager. Or is there a deeper, more penetrating reason?

“Pat,” as she is called, is a thin-faced child with dark brown hair, its natural curl cut almost like a boy’s. She has dark hazel eyes, a wide mouth. She is 5 feet 3 inches tall and weighs 105 pounds.

She admitted yesterday that she was homesick here. She said likes everything in South Dakota better than anything she found here.

She is apt to answer questions in monosyllables. Any animation is brief and flickers past to be replaced by composure. A frequent word is “well...” Once a question is answered she makes no move to continue the conversation.

But all unconsciously she gave a picture of work, fun and pleasure on the little farm she left a month ago to come here.

There were some things she liked better than others on the farm but she failed to mention anything she truly disliked.

“I like to ride horses. Ever since I was a little kid we had workhorses and us kids rode. We had ‘Betty’ and ‘Bob’—that was one team — and ‘Lady’ and ‘Blaze.’ They were workhorses but we rode them a lot. Like out after the cows.

“‘Betty’ and ‘Bob’ liked us. They got old and lazy. One night they got out on the road and got hit so we had to send them to the fox farm.”

What kind of pets did they have?

Then she exclaimed. “Oh, doggone it.” She had dropped a half-eaten pear.

“I liked the dog best. The one we’ve got now. ‘Mae.’ He is a black cocker spaniel”

Yes, she likes rock ‘n roll and her favorite is – who else? – Elvis Presley. The comment that the interviewer had met her hero brought no particular response.

There was no television at the farm but there was at her aunt’s home here. She always tried to get home from school “for the good programs.”

Asked about books she said “I don’t read much in books. But I like stories about horses.”

Spelling is her favorite subject. She got fairly good marks in everything but math. Back ‘“home” she went to a country school with 11 pupils from five families

“We walked about a mile to school.

“Last year I missed only one day of school I was sick that day.”

She likes to ride around in cars. At home the youngsters m the family “got to take the car to town and monkey around with it. Then we got to drive the tractor. That was fun. Most of the time, though, we listened to the radio.”

She is the fifth of the nine children of Mr. and Mrs. William Corcoran. Her middle name is her mother’s first name – Faye.

“My brother – He’s in Texas. My oldest sister is in Detroit. The rest are at home.”

Does she like things inside or outside the house best?

She described the farm house as a “great big one.”

What is grown on the farm?

How big is it?

What is your favorite sport?

How does it compare with school in South Dakota? Do you like it better there?

The law today began the long and difficult process of attempting to learn the reason for the swift act of 12-year-old Patricia (Pat) Corcoran in killing the aunt who had taken the South Dakota girl into her home.

A Requiem High Mass for the slain woman, Mrs. LaVern Bunce, 54, will be held Monday at 9 a.m. at St. Jariath’s Catholic Church. She died, according to Dr. George S. Loquvam, Alameda County pathologist, from multiple hatchet blows and stab wounds.

The girl admitted to police that she killed her aunt in the neat white stucco home at 3462 Rhoda Ave. Thursday evening in a fit of frenzy, which, until a better motive is found, apparently stemmed from brooding over $5 “Pat” had lost after her aunt had given it to her.

With her violent emotion spent, “Pat” slept well last night at the Alameda county Juvenile Hall where she is under close supervision. Attendants said there is “nothing unusual” in her conduct.

Alameda County’s youngest murderess will make her first court appearance before Oakland Municipal Judge Homer Buckley Monday when she will be certified to Juvenile Court, on the murder complaint issued yesterday.

Then will start the psychological and psychiatric study in an attempt to ascertain through her background, attitude, personality, and observation some solution to the crime that has baffled authorities who have seen the lanky, dark-haired youngster.

The recommendation of the Alameda County Probation Department at the end of its weeks of study will be given Juvenile Judge Ralph E. Hoyt, who will make disposition of the case. Dr. Douglas Kelley, the University of California criminologist, who questioned “Pat” the night of the crime said “anyone who takes another person’s life is emotionally disturbed.” He said it would take more time for him to make a diagnosis.

One of the girl’s comments when police came in response to the anguished call of the slain woman’s husband, Guy, 54, was ‘I must be crazy.”

Pat was brought from the farm near Mitchell, South Dakota, where she was one of nine children of the William Corcorans, to live with the aunt and uncle a month ago. The Oakland couple were childless and it was thought by both couples that the girl could have more advantages here. She had enrolled in Bret Harte Junior High School where classmates and teachers said she was a quiet girl.

Bunce, a battery company moulder and brother of Pat’s mother, said he believed the girl was happy and was mystified about the motive.

Both he and the girl’s father are expected to be in court Monday. The uncle said he held “no malice, just sorrow.” The father is driving out from South Dakota. 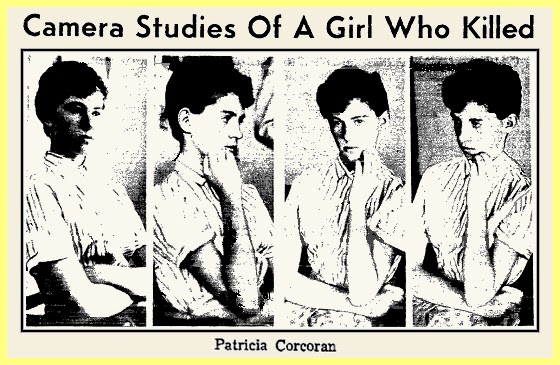 FULL TEXT (Article 4 of 4): Patricia Faye Corcoran, 12, the ax slayer of her Oakland aunt, will go free at the age of 21 or before.

This was determined today when Superior Judge Ralph E. Hoyt committed the girl to the California Youth Authority rattier than order her through regular court processes.

Judge Hoyt said she will first be studied at a CYA reception center and then placed in an institution of the type to best help rehabilitate her.

Patricia murdered her aunt, Mrs. LaVern Bunce, 55, on Oct. 4 because she became “homesick.” The girl had been staying with her aunt and uncle in Oakland at 3462 Rhoda St., after coming here from her home on a South Dakota farm.

Judge Hoyt made his decision after asking Guy C. Bunce, 54, the dead woman’s husband, and Patricia’s father, William Corcoran, 61, here from South Dakota, if they wished to make any statement.

Patricia appeared her usual calm self during the hearing at which Judge Hoyt announced his decision to spare her the rigors of a court trial.

Conceivably, had Patricia been ordered to court, she could have been tried as an adult and possibly imprisoned for life. By being ordered directly to the Youth Authority, she becomes free at the age of 21 when that agency’s jurisdiction ends, or before the age of 21 if the CYA decrees she has been rehabilitated.

Patricia was declared legally sane by examining psychiatrists. Had she been insane at the time of the murder, she would have been committed to a mental hospital with the possibility of facing criminal proceedings after being declared cured.

Patricia, fifth in a family of nine children, was brought here in September by the Bunce to live with them because the Bunces, childless themselves, felt she could have more advantages.

She displayed virtually no emotion after the violent crime last month. Judge Hoyt at an earlier hearing ordered a polygraph (lie detector) test made [by a] psychologist to determine the child’s “involuntary reactions,” in part to learn if she regretted the crime.

Today, Judge Hoyt called for results of the tests, in report form, and studied them before making his decision.

[Note: illegible missing text replaced by insertion “by a.”] 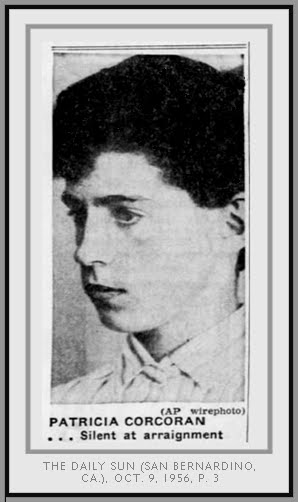 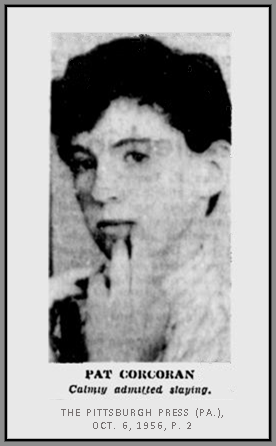 Email ThisBlogThis!Share to TwitterShare to FacebookShare to Pinterest
Labels: Give 'em the Axe, Youthful Borgias