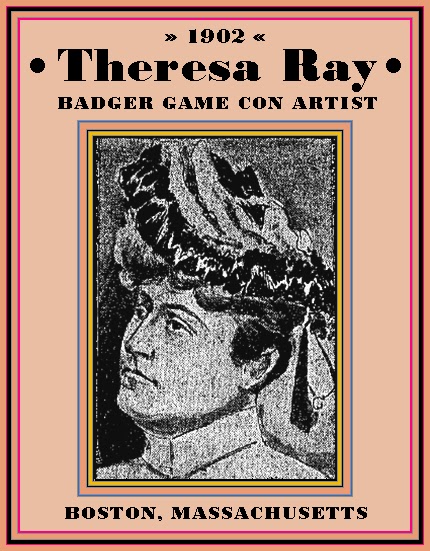 FULL TEXT (Article 1 of 2): The first session of the municipal court was crowded yesterday morning by men when sat in the close room during the entire forenoon simply for the purpose of getting a look at the features of Theresa Ray, the woman described as a beautiful woman, and who is under arrest on the charge of being concerned in a “badger game” in which David C. Wyman accused the woman of relieving him of money and jewelry valued at $400.

For two hours after the court was opened the woman, was allowed to remain in the Tombs corridor instead of sitting in the prisoners’ pen, which was well filled with persons there on the charge of intoxication and minor offences. “Cheeky” Ned Hardman was granted the same privilege, and in this way the alleged badger game workers escaped the scrutiny of the curious crowd.

When the prisoners were called, lawyer Swasey, who had been sent for, paid he had not had an opportunity to talk with the prisoners, and asked that there be a stay of proceedings for a brief time. The request was granted.

Counsel and prisoners went into a waiting room in the Tombs, where they remained a half hour. The crowd had only got a glimpse of the woman, and so it waited for the names to be called again, thinking there would be some kind of a hearing and that there would be an opportunity to study the woman’s features.

The crowd was disappointed, because lawyer Swasey, instead of asking for a hearing, expressed a desire for a continuance of one week, and Judge Bennett allowed it. The prisoners stepped to the rail for a period of about 80 seconds, and then returned to the Tombs Bail was fixed at $1000.

FULL TEXT (Article 2 of 2): “Cheeky” Ned Hardman, who was arrested with Theresa Ray in connection with the alleged attempt at badger work on David Wyman of 22 Bedford st, was taken back to New York yesterday afternoon by Detective Sergeant Charlestown of the New York detective bureau. The grand jury having failed to indict Miss Ray or Hardman, Chief Inspector Watts communicated with the New York police and asked if Hardman was wanted. They sent back word that there was a charge of obtaining a diamond ring valued at $600 by false pretences from Louis Cohen. Hardman was taken before Judge Brown and turned over to the New York detective. He said that he believed on arrival in New York he would be able to “adjust matters satisfactorily” and would gain his freedom before a week had passed. 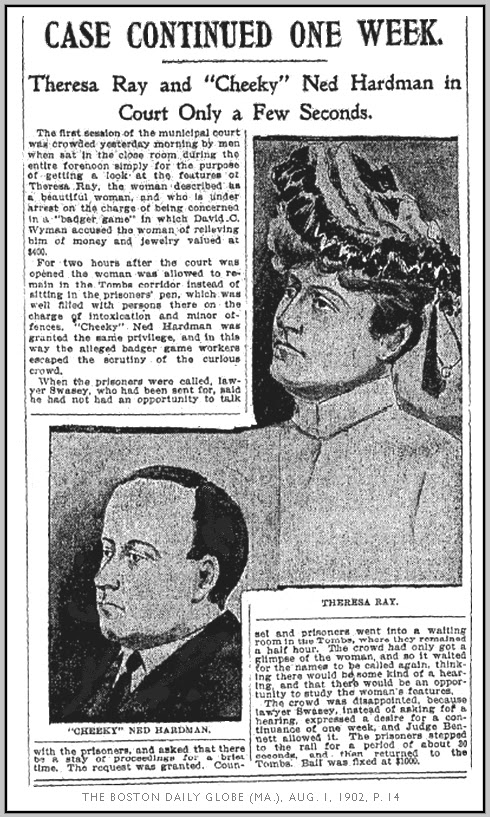