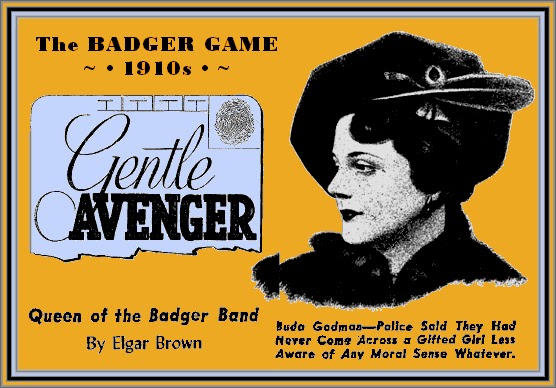 FULL TEXT: Stealthily, four men moved down a hotel corridor, paused outside a door, and listened. From inside, the low voices of a man and a woman came to them. They waited a moment, and then, as the others drew around him, the leader rapped sharply on the panel.

Within, the voices stopped. The man and woman did not answer the knocking. It was the group’s leader, outside, who spoke, his voice stern:

“Open in the name of the law!”

The man inside – Edward R. West millionaire tea and coffee importer—cautiously unlocked the door and stood on the threshold, pale and quaking. The woman – young and pretty Buda Godman, with whom the importer was infatuated – cowered behind him.

“We’re Federal officers!” the group’s leader said brusquely, and he and the others shouldered their way into the room. “We have a warrant for your arrest under the Mann Act, Mr. West. Put on your coat, and come along!”

This was, indeed, a plight, and West, as the glint of the officers’ badges caught his eye, was violently aware of it. The words of the group’s leader deepened his agitation.

“We know all about you, Mr. West. Bringing this young girl from Chicago to New York. That’s crossing a state line – a lot of state lines. That’s a Federal offense.”

After that, while sweet-faced Buda Godman whimpered, the officers began to soften somewhat. It seemed almost as if they might relent. They began talking over the situation with the millionaire from Chicago’s exclusive Gold Coast.

Presently, West said to them:

Buda Godman dried her eyes. Edward R. West didn’t know they were laughing eyes, then. He didn’t learn that until after he had paid the $15,000. It was then that he went to the office of the master detective, William C. Dannenberg, one of the founders of the Bureau of Identification out of which grew the present F. B. I., and in shame and anger confessed:

“Mr. Dannenberg, I’ve been betrayed by the girl I love. I’ve been duped by a ring of extortionists of which she’s a member. They’re making a mockery of the Mann Act that you helped write. ”Yes,” said Dannenberg. “I know Buda Godman, and ‘Dapper Dan’ Collins and Jimmy Christian. I’ve been waiting the chance to get that gang.

“Here, look at these photographs. Are these the men you thought were Federal officers?”

West gazed at the pictures which the detective spread before him. The faces were those of the men who had come so unceremoniously to him, wearing badges.

DANNENBERG, in his way, was as interested in the case as the disillusioned millionaire. Dannenberg knew the strange background of the girl West had believed sweet and faithful, and he knew that Buda Godman and the “badger” gang with whom she operated must be curbed if the Mann Act was not to fall into disrepute. Now was his chance to strike.

As he told West how, when the time came, he would strike. West, the lovelorn son of wealth, came to see how badly he had been deceived.

Buda was born in 1888 in Chicago, the daughter of a race sheet writer who used to say that her high spirit and the gentle way she had made her even less predictable than horses. He had high hope for her, for she had a poignant beauty and a quick understanding, and he sent her to be “finished” at St. Joseph’s Academy in Adrian, Mich.

She wouldn’t be “finished” the way he wanted her to; she came back, grew friendly with some of his own associates in the racing gamble, and when she was only 19 she married Tell Taylor, the song writer, who, the story goes, wrote “Down by the Old Mill Stream” thinking of her.

Whether that was so or not,’ Buda couldn’t say, and Taylor acrimoniously denied it when he divorced her in 1910: “I married Buda when we both were drunk and I found out she was quite incapable of loyalty to anybody.” 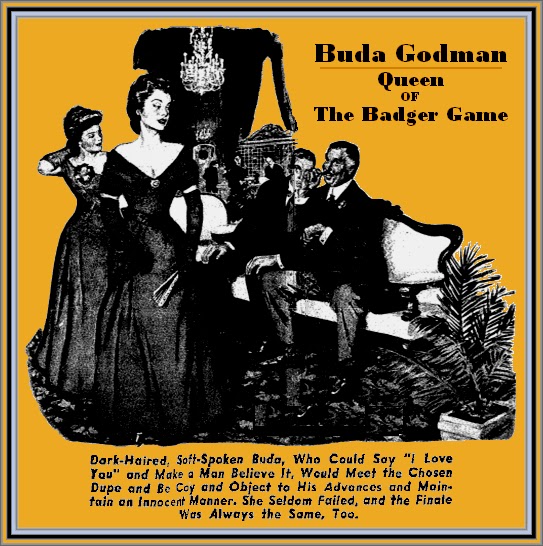 Dark-haired, soft-spoken Buda didn’t care what he said, or what anyone else said. Police, following her high-spiralling course in her early 20s, said they never came across a gifted girl less aware of any moral sense whatever.

Police, meanwhile, began to hear of. her as “Queen of the Badger Band.” The gang had headquarters in Chicago’s Tyson Hotel on the South Side. They were extortionists, Buda their lure.

THEY would “case” a prospective dupe, see that Buda met him, then it was up to her.

She didn’t often fail. The gang was reputed to have been a “million dollar outfit” as the result of her charm and resourcefulness.

The objective was always the same. Buda would meet the chosen dupe –she first met West in the Hotel Blackstone – and she would be coy. With all the finese she could command, she would object to his advances and maintain a manner of innocence.

She would know just when to profess love, at last and suggest or preferably get her dupe to suggest a trip to another city – across a state border. The finale was always the same, too. Gang  members would break in upon the pair. They would pose as Federal officers. Nothing but the “pay-off” would silence them.

The victims didn’t dare bring charges until the outraged West came along. He dared.

As he spoke to Dannenberg, the detective had in mind a course which since then has been followed by a Supreme Court interpretation of the Mann Act. It’s an interpretation which makes the “badger game” a risk today not worth the taking.

“You didn’t violate the intent and the meaning of the act,” he told West. Dannenberg was in position to know, for it was on the suggestion of the late Federal Judge Kenesaw Mountain Landis that the detective had collaborated in writing the act. “You and Buda had been together for some lime in Chicago before you went with her to New York. Obviously you didn’t take her across a state line chiefly for the privilege of being with her when you already had had that privilege here.” “That’s right,” West said. “I didn’t really take Buda to New York. She persuaded me. I wasn’t he one who planned the trip.”

The law then began to catch up with the gang. Hotels had been shadowed before that; operatives acted as elevator men and bellboys, doormen and switchboard operators. But the sworn complaint, such as West made, had been lacking.

His complaint clinched the matter. The gang was rounded up. Indicted on charges of blackmail were Buda and Edward Donohue, Doc Brady, Homer T. French, George Irwin and Jimmy Christian. Just as nothing in the past had bothered Buda, this didn’t either. In the District Attorney’s office, she let her big brown eyes flutter, and asked: “What is going to happen to poor little me?”

SHE helped answer the question herself. She didn’t stay in jail. Spurning the services of a
bonding company, she turned to two “dear friends” – as she said – Mrs. Susie Summerville and Mrs. Rene Morrow, who put up $10,000 bail.

They put it up and they left it up, for as soon as she could after that Buda vanished, the bail was forfeited, and, although the gang was smashed, the next that was heard of the gang’s invaluable lure, Buda, she was safe on the sunny beach of Havana.

When she heard that Jimmy Christian, a gang member who had been fond of her, had pleaded guilty and had taken an 18-month sentence after insisting that she was only an innocent tool, she sighed and said:

“Why, that handsome sucker!”

She didn’t know that unwittingly she had happened to do a good turn in the interest of law and order. It remained for Dannenberg long afterward to point out that she and her gang were responsible for the break-up of the once-common practice of blackmail through the “badger game.”

“She did more to eliminate the Mann Act as a tool of blackmailers and to preserve its intended value to society than did any of the professional reformers who were having a go at it,” said Dannenberg. “I’ll always be grateful to her for showing the Mann Act’s weakness by her distortion of its provisions to meet her own ends.”

EVENTUALLY the Supreme Court of the United States supplied the remedy for misapplication of the Act. It ruled:

“That a woman transported for immoral purposes in violation of the Mann White Slave Act, if a guilty participant, may be convicted as a conspirator with the person who caused her to be transported.”

The end of Buda Godman’s star part in the “badger game” was not, however, the end of a spectacular career. In Havana she became the protege of Charles A. Stoneham, president of the New York Giants baseball club, and for years afterward her Park Ave. apartment was a stage across which moved such figures as Arnold Rothstein, the gambler; Owney Madden, the bear King; race track notables and Broadway climbers.

To the other residents of the apartment house, she was known as Mrs. Stoneham; for others, she had other names; and meanwhile the old blackmail charges in Chicago had been dropped.

Her last public appearance she made in 1932, and it was no anticlimax. She had the role of a chief figure in the $300,000. jewelry robbery of Harry C. Glemby, hairnet manufacturer, of New York. Detectives stopped a taxicab in which she was riding at Broadway and 33rd Street, and in the cab found nearly all of the stolen gems.

This time there was no Jimmy Christian to take the rap for her. She couldn’t say, “Poor little me!” again. She did insist on keeping an alias, Helen Smith, and under that name – plump now, 45 years old, and aging—she pleaded guilty to a charge of criminally receiving the $300,000 loot taken in the hold-up of the Glemby home.

The court did not establish that Helen Smith and Buda Godman were one and the same. The judge accepted the name, Helen Smith, and sent her to Auburn Prison for from four to eight years. That really was the end. She served her term, and vanished. 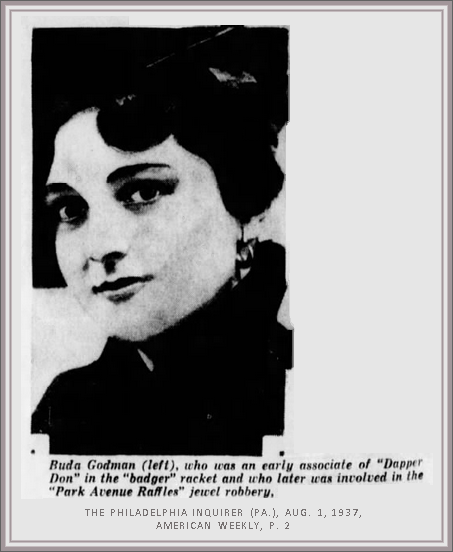 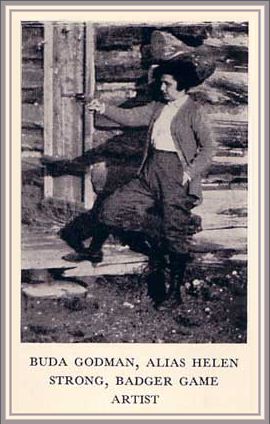 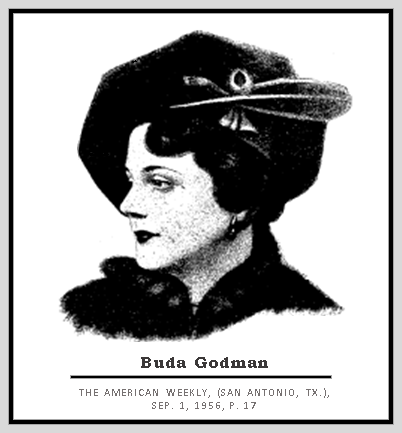 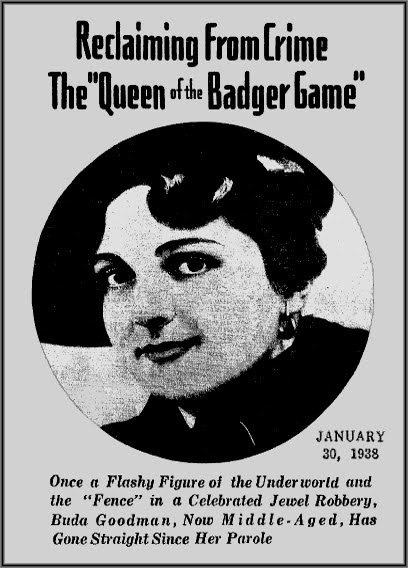