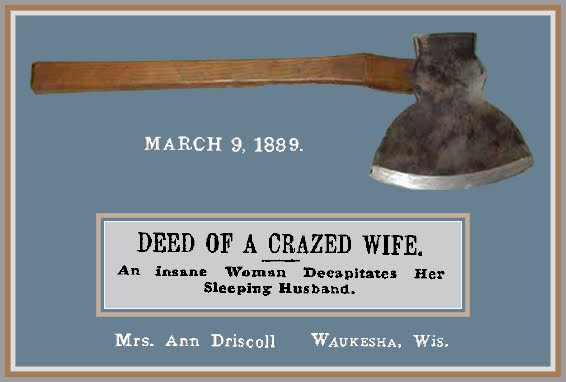 FULL TEXT: WAUKESHA, Wis., March 6.—One of the saddest tragedies in the history of Wankesha County was enacted last evening in a little farm house on the Anderson property, between Delafield and Kashotah Mission. During a fit of temporary insanity Mrs. Ann Driscoll killed her husband, nearly decapitating him with an axe, and attempted to slay her two sons. The woman was arrested and brought here this morning. She has recovered her reason, and recalls every incident of the terrible affair. Timothy Driscoll was about 58 or 60 years old, a tenant on the Anderson farm. His family consisted of his wife, Ann, about 55 years old; two sons, aged respectively 27 and 23, and a daughter about 25 years old – all living at home. Mrs. Driscoll has been in poor health for several months, but until within a few days no fears were entertained that her reason would give way. During the past week or ten days, however there have been indications that her mind was becoming affected.

Last evening, about half past 9 o’clock, the younger son left the house, going to the barns to look after the stock. All the afternoon and evening, Mrs. Driscoll says, she was oppressed with a strange presentiment that something was about to happen to her husband and children – a feeling that to save them from the impending calamity she must take their lives. Mrs. Driscoll accordingly followed the son from the house, and securing an axe concealed herself behind some shrubbery, and with weapon uplifted awaited the coming of the young man. When the moment arrived for the fatal blow to be struck, the woman says, she became unnerved and hesitated a moment. At that instant the son discovered her. She hastily concealed the axe in the folds of her dress and accompanied the young man to the house. Entering the bedroom she hid the deadly weapon under the bed. She also secured a large, keen edged knife, which she placed in the bed, retiring in a few minutes. Half an hour later Mr. Driscoll retired, exchanging a few words with his wife, and soon went to sleep.

When Mrs. Driscoll was convinced that her husband was asleep, she arose softly, secured the axe, and raising it high above her head, prepared to bring the keen blade down on the neck of the sleeping man. She seemed to realize what she was doing, the woman says, and lowered the weapon. Five times she did this, on the last occasion bringing the axe down on her husband’s neck, the keen blade severing cords and arteries. Driscoll raised himself spasmodically, and gasped: “Oh. Ann, you’ve killed me!” and fell to the floor. He did not speak again. Securing a razor the woman started for the apartments on the second floor, where the sons and daughter were asleep to murder them.

Miss Driscoll occupied a room near the head of the stairs, and heard her mother’s step as the woman stealthily ascended. Peering through the half open door she saw her mother move to .the bedside of the young men, and carefully unfasten the collar of the younger, and bare his throat. Over the neck or the sleeping youth was held the razor. The young woman did not hesitate an instant, but sprang forward and grasped the woman’s wrist. A desperate struggle ensued, lasting but a moment, in which the daughter was successful in disarming her mother. The young men were aroused and the woman overpowered. Then the tragedy in the sleeping room below was discovered.

Mrs. Driscoll, when brought to Wautesha to-day, was in a terrible condition of mind – grief and remorse struggling for the mastery. There is no doubt that she was insane when she attacked her husband, as the life of the family is known to have been peaceful, and the relations of the members affectionate.