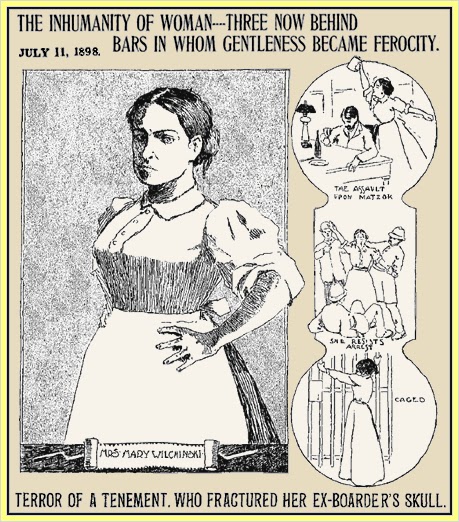 ILLUSTRATION CAPTION: The Inhumanity of Woman – Three Now Behind Bars In Whom Gentleness Became Ferocity. Terror of a Tenement, Who Fractured Her Boarder’s Skull.

FULL TEXT: No one at the tenement at No. 191 Second street refused Mary Wilchinski anything. She had only to make her wishes known. It was not that they liked her, on the contrary, the tenants feared her, and for that reason allowed her to have her own way in everything.

Not only was this Mary Wilchinski the absolute ruler of her own domestic circle, but she bossed every other household in the tenement as well. She was a match for any dozen women in the house, and the men – well, this story is written because of an encounter she had with one of the sterner sex.

This unfortunate individual is Louis Matrok. It was a sorry day for him when he became her boarder three months ago. He wanted to leave the very first week, but he didn’t have the courage.

“If you leave me,” she said, “It will mean a reflection on my cooking, and my friends, who are also your friends; will sneer at me. So you must remain.”

The tenants took up his fight for him and a week ago he went to another boarding-house in the same tenement. He didn’t dare leave openly for fear of his landlady’s vengeance, which. however had not long to wait.

Her opportunity came Saturday night last. She saw Matzok’s roommates, Joscoh Trenock and John Wippe, leave the house and then she stealthily entered his apartment.

~ Caressed With a Beer Mug ~

Without a second’s warning she brought a heavy beer mug down on the head of the unfortunate man, who fell to the floor. Before he could get to his feet out came a stove shovel with which she had also armed herself, and she beat the poor fellow on the head with it until the handle broke in her hands.

When the police recovered the shovel later they found it dented in on one side from the force of the blows, and it was covered with blood.

When Matzok's room-mates returned they heard the woman singing, and commented upon it.

“That woman has been up to some mischief,” remarked Wippe. “She wouldn't be so happy otherwise.”

One glance into their room was sufficient. Matzok was stretched out on the floor, unconscious.

“She's killed him!” exclaimed both men.

Policeman Jones rang for an ambulance and Surgeon Rails, who responded, found the man suffering from a fractured skull. He was taken to Bellevue Hospital, where his condition became so critical that a Coroner was summoned and his ante-mortem statement taken.

~ Woman Arrested After a Fight. ~

The woman was not made a prisoner without difficulty. Several times she broke away from the policeman and at the Fifth Street Station, where she was taken, she assaulted Wippe, who went to testify against her.

“We laughed when poor Matzok said he was afraid of her,” said Wippe, “but alas, he knew what he was talking about.”

“So you are against me, too,” exclaimed the woman, and before the policeman could stop her, she struck Wippe in the face and threw him against the wall as if he were a babe.

In the Jefferson Market Police Court yesterday the woman was held without bail to await the result of. Matzok’s injuries. At the hospital it was said that the injured man might recover. Mrs. Wilchinsky told a reporter for The World yesterday that she had merely acted in self-defense.

“But didn't you threaten to fix him?” was asked.

“Oh! Indeed I did not. I’m not a fighter. It is not true that I have a bad temper. Why, I have a most lovely disposition!”

The people in the tenement say that she has an even disposition – always savage. She is above the medium height, broad-shouldered, with stout round arms. Her hands are large and hard. She has black eyes – snapping eyes. She is thirty-two years old and weighs about 170 pounds.

If Matzok recovers she can be indicted for assault in the second degree, for which there is a sentence of five years’ imprisonment.