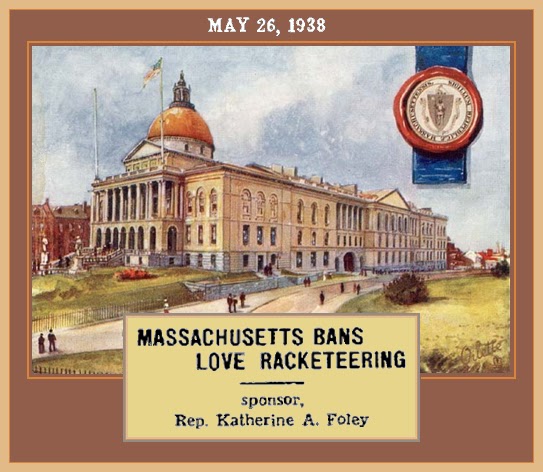 FULL TEXT (Article 1 of 2): Boston – “To take the heart balm racket off the gold basis,” Rep. Katherine A. Foley of Lawrence yesterday urged the joint committee on judiciary of legislature to favor the bill which would outlaw breach of promise suits in Massachusetts.

Mrs. Foley declared that the woman who “puts a price on tries to collect money for it is as much of a robber as a holdup man with a gun.” She contended that breach of promise suits largely degenerate into extortion suits against unwitting, unsuspecting and wealthy males.

She told the committee the amount of money paid for “blackmail to people with supposedly broken hearts, who merely resort to these contemptible means to extort money from innocent victims it most appalling.” She maintained that no woman of delicate feelings wants to parade the details of unfruited romances before the public and those hurt hide their feelings instead of flashing them before the eyes of the world.

Rep. Raymond F. O’Connell of Springfield favored, saying the thought behind the proposal is good and that breach of promise suits are “one way of getting something for nothing.”

Atty. Samuel Silverman, former corporation of Boston, favoring, said the time is coming when breach of promise suits will be wiped out and the Massachusetts Legislature should get aboard the bandwagon early.

No opposition was voiced.

FULL TEXT (Article 2 of 2): Boston, May 26 – Massachusetts has banned from it courts “love racketeers” and “gold diggers.”

“I’m extremely happy,” said Mrs. Foley, widow and mother of three girls, when informed that the bill was signed.

“Massachusetts now makes the fifth state to join in the fight against love racketeering.

The other states are Indiana, Illinois, New York and Michigan. I am glad that our state has fallen in line with the others.”

Mrs. Foley argued that an woman who cut a price on love and tried to collect was a robbery and “one of the worst enemies of her sex.”