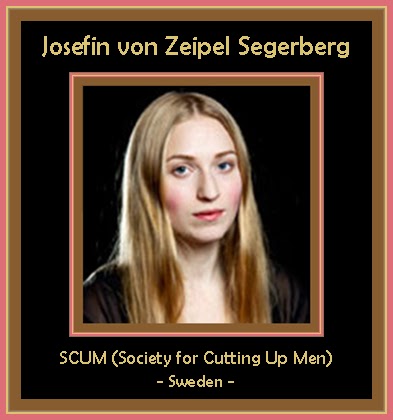 Josefin von Zeipel Segerberg is the director of the SCUM Theater in Sweden, named after the anti-male hate manifesto by Valerie Solanas "the society for cutting up men." She is also a Valdsamma hat promotorn (promoter of violence and hatred) and bigot.

Segerberg is also a student at the University of Gothenberg in Sweden. The theater group, named after Solanas' manifesto routinely performs an adaptation of the hate piece for school children. The online program description of this performance is unambiguous in it's message, beginning with an excerpt from Solanas's original writing.

"SCUM Manifesto by Valerie Solanas is a violent attack on masculinity. The men are accused of having made the world a shit place. Solana line up [sic] all the men are obliged to: war, violence, money system, imagination, ugly buildings and more. She puts forward the thesis that men are biologically inferior to women and that it is the foundation for all problems."

Segerberg is also the star of a video on youtube, posted in November 2010 depicting herself murdering a newspaper reading man, dancing in celebration, licking the bullet wounds on the corpse, and giggling. The video ends with the clear advocacy of murder: "do your part." 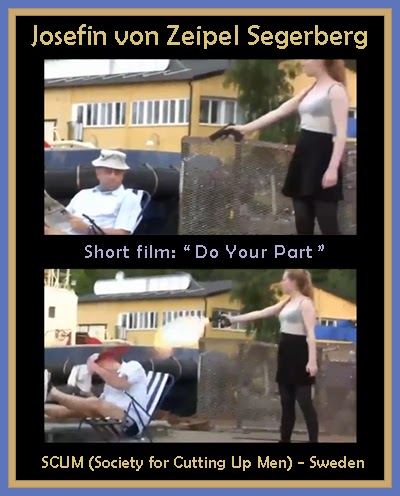 Segerberg also participates in an event called "Hetero Hate Day" where hatred is celebrated and promoted by the Gothenburg Queer Institute. The Institute, along with the celebration of hate was established in 2007.

“Hetero Hatred Day - it may sound a bit extreme. It should not be taken too literally, the hatred is directed primarily against the heterosexual norm. But the name of the feast is undeniably powerful and raises a few eyebrows safely. The initiative is Gothenburg Queer Institutions according to the website "to promote an uncompromising opposition to heterosexism." Five days ordained for discussions, lectures, film screenings, and much more. Most of the week's events will take place in the arts during the Earth, so even the evening's theater, SCUM. A performance with clear feminist overtones.”
[“Coming through hetero-hatred,” Göteborgs Fria, Sweden, Aug. 27, 2009]