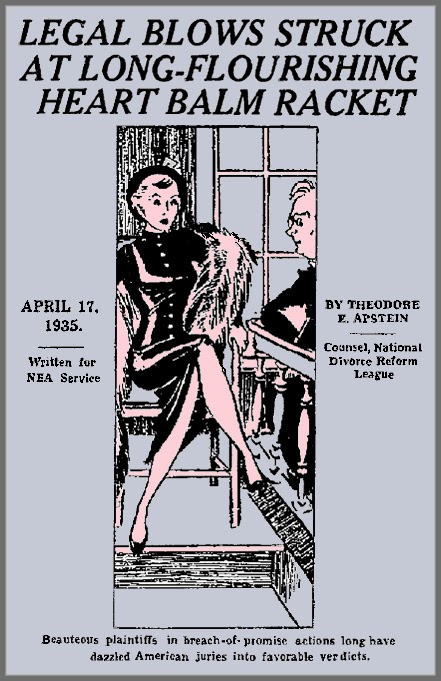 FULL TEXT:  New York, April 17.—The recent passage of bills to abolish breach of promise suits in Indiana and New York have sounded the death knell in those two states for one of the most vicious and lucrative rackets which exists on the well crowded American scene.

The breach of promise action found its basis in the old English common law and is based upon a principle which at one time was considered fundamentally sound. This is the assumption that a woman is weak and defenseless, without means to support herself or to protect herself from the machinations of man.

Now the times have changed, thus making the old reasoning inapplicable. The adoption of universal suffrage; the entrance of women in important; places in the professions, in business, in industry, and, more lately, into high public offices, has altered their status from that of the weak dependent into the independent and self-sufficient equal of man.

In that period from the “Gay Nineties” until the beginning of the depression in 1929, the United Slates courts witnessed a miniature “Thirty Years War" of their own. It was no bloody strife over religious or economic issues, but the prolonged battle of the breach of promise suit.

Previous to that time, breach of promise claimants received an average of approximately $10,000 apiece and suits were generally adjusted out of court. The record verdict was $45,000, and this stood for many years. A rising market for broken hearts, however, was inaugurated by a $225,000 verdict against a Brooklyn octogenarian millionaire, who had been sued for $350,000. The presiding judge reduced the amount to $125,000 on the ground that the sum awarded by the jury was excessive.

This lucrative decision brought thousands of love letters out of safe boxes and a new profession was born. To avoid unpleasant publicity, men started paying large sums just to keep their love alliances out of court.

But it was the famous “Baby-Bunting” action which ushered in the new era for breach of promise with the fantastic publicity which the case incurred.

For a time the newspapers of the nation were flooded with amorous poems written by a wealthy man of the day. This embryonic bard has the habit of pouring out his affection in verse to a girl known as his “Baby-Bunting.”

For mouths she read and reread his doggerel ecstasies. Then, one morning he went on a hunting trip and never returned to conclude his wooing. She sued and the poems were published. For weeks, “Baby- Bunting” was a by-word of this country. Parodies were innumerable.

But the injured girl was able to collect a large sum—estimated to be $150,000—for the devout and careful manner in which she had collected the poems.

The success of this suit spurred other wounded hearts to abandon the handkerchief and resort to the court. Juries and judges were lenient and a new field was open to those in quest of easy money. Even men became interested in cashing in on so nebulous a law. 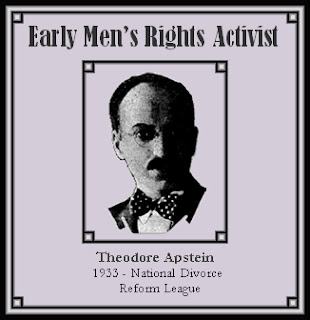 Not long after Baby-Bunting retired with her spoils, Philadelphia was rocked by the details of a breach of promise suit against a wealthy widow, whose deceased husband had made millions organizing an ice company. The rejected swain swore that he had spent thousands of dollars while courting the “Vivacious widow” and in preparation for the wedding, after she had demurely whispered “Yes.” The court, however, gave the verdict to the defendant.

Further impetus to the growing racket was given in 1913 when an English girl sued a nobleman who was one of the largest owners of real estate in London. Early in the proceedings the girl’s attorneys offered to settle with the nobleman for $75,000, but he refused. Finally he was obliged to pay $250,000.

The notoriety caused by this suit prompted the settlement out of court for many a pending case.

During the early years of the World War there was an alarming increase of broken hearts in this country, achieved. More than 150 suits achieved nation-wide headlines. Nine of these were brought by men, but only one succeeded in collecting any money. This particular plaintiff was a backwoodsman from Maine and the jury considered his anguish worth less fain $25. So the woman in the case was compelled to pay him exactly $24.24.

Of the remaining 141 publicized suits brought by women during these years almost 100 were taken to court. Thirty-nine came to trial of which women won 29 verdicts. Men at first were timid to answer these actions, but by the end of the war period, they had adopted the fighting front and commenced retaliatory measures

The United States still leads the world in the number of such actions, supposedly brought by aggrieved and innocent persons. In no other nation have such large sums been demanded so constantly and until 1929 these amounts increased annually. It was not unusual for men of wealth and position to be sued for $500,000, whereas one enterprising girl estimated her heart to be worth  $2,000,000. The racket became so widespread and received so little check that women of wealth have likewise had to face increasingly large suits for supposed jiltings.

So successful were the earlier plaintiffs that thousands chose to step on this lucrative bandwagon and take their chance to merciful courts.

Almost daily one began to read of a new breach of promise suit. The result was a cluttering of the court calendars, a general exaggeration of the causes of breach of promise, widespread misunderstanding of the question on the part of the public and subsequent investigation into the racket by the authorities.

Prom 1920 to 1925, more than one million dollars was paid out by wealthy men in the United States in successful breach of promise suits brought by women. Seventeen plaintiffs in these years of prosperity are known to have received more than $60,000 apiece for their efforts.

The effect of a breach of promise suit upon the defendant is not confined to pecuniary loss. The mere announcement of such a suit has sent many a man into the hospital. Some judgments have caused other men to go into bankruptcy. An in one instance, a man committed suicide rather than face the ordeal of trial. Many men and women are driven to the uncertainty of marriage with the suing party although in two cases the women refused to enter matrimony when it was offered in lieu of a handsome check.

With the return of more prosperous days in the United States, many authorities believe that a new impetus will be given the breach of promise racket.