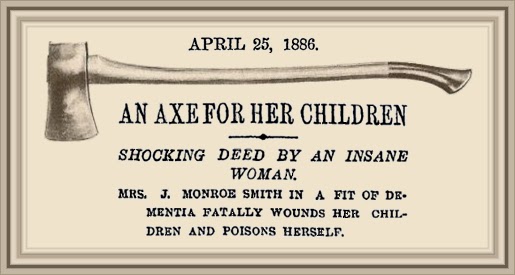 FULL TEXT: Keyport, N. J., April 24.— Middletown Township has been shocked by one of the most horrible tragedies that over occurred in this part of the State. The scene of the deed was a house near Granville, a little village just west of Port Monmouth. It dates back to the period of the Revolutionary war and was formerly the homestead of the Hoppings, one of the oldest families in the county. Fannie Hopping married J. Monroe Smith, and together they went to live in the old house some 25 rears ago. Today the mother and three of the children lie at the point or death, one child has been laid in its grave, and the others with their father are nearly crazed with grief and horror. All this was the result of insanity, from which Mrs. Smith has been a sufferer for years.

Fifteen rears ago Mr. Smith mortgaged the old homestead fur $3,000 to a Mr. Schenck. of Holindel. Subsequently Lawyer Marcus B. Taylor, of Keyport, wrote to Mr. Smith that he was about to foreclose. This news greatly afflicted Mrs. Smith, and a he became subject to melancholia. The mortgage never was foreclosed, but passed into the hands of a Mrs. Saybrook, of Keyport, who still holds it. Two years after the trouble about the mortgage Mrs. Smith’s second child died, and she again became subject to melancholia. She attempted suicide, and was sent to the insane asylum at Trenton for 18 months. When she returned she was visited with a new affliction. An uncle who lived with her was affected with a cancer, and she nursed him through a long and trying illness till he died.

Last year the strawberry crop, one of the chief means of support to the Smith family, failed and other crops turned out badly. Mrs. Smith’s mental condition went from had to worse. She feared that, as the interest on the mortgage was unpaid, her children would be turned out of the old home. Two months ago she told John Eastman, a relative, that if her husband did not do something with her she would do something desperate. She had already formed the purpose of killing her children. Her husband sent her to visit her brother, George W. Hopping, of Elizabeth. Ten days ago she returned in a restless and melancholy state. Her husband decided to send her to the asylum again, but she fell upon her knees and begged him, for God’s sake, to let her stay at home one more week.

At 6 o’clock yesterday morning she and her husband arose as usual. He dressed and went to his hotbeds. She said she would go and shut the hen-house door. She went to the wood pile and got the axe, a short-handled utensil with a broad, thick, heavy beam. She stole up the back stairs to the room of her daughter Edna, 4 years old. A single blow on the head slew the little one instantly. In the next room was Rufus, aged 13. She struck him three terrible blows, raising up the top of the skull so that the throbbing brain was visible.

In the next room lay Bessie, age 11, and Alida, age 7. Bessie heard the noise, sprang out of bed, and saw her mother striking Rufus. She ran back, and, kneeling by her bed, began to pray. The frenzied mother rushed in and dealt her a blow. The child went on with her prayer, and besought Heaven for mercy for her mother. The mother struck her three times. Then Alida was attacked and terribly cut.

The next room contained Laura, age 18, and Nancy, age 2. The mother tried to enter this room, but Laura, after a struggle, succeeded in fastening the door. A colored servant had run after Mr. Smith, who hurried into the house and carried his wife to her room. There she lay on a lounge muttering that she had killed her children rather than have them homeless. Physicians were sent for, but they pronounced the cases of the children hopeless. Mrs. Smith was found to be also in a precarious condition, having taken poison before going to her children’s rooms.

The funeral of little Edna took place yesterday at 2:30 P. M. The Rev. Dr. Glynn. of Port Monmouth, conducted trip Methodist Episcopal burial service. The burial was at Fairview Cemetery, near Middle-town, four ratios from the house. The bereaved father, the daughter Laura, and Horace, age 10, accompanied the remains to the grave. There were also present at the funeral George W. Hopping, John Eastman. Uriah Seely, keeper of the Great Beds Light at the mouth of the Raritan; William Foster, Charles Smith. Henry Smith, Prof. G. W. Holmes, of Keyport, and Mrs. Holmes, all relatives of the family. There were a number of friends and neighbors at the home caring for the mangled children and the demented mother.

While John Keegan, one of the watchers, left Mrs. Smith for a for a few moments this  morning she slipped into the pantry where the rat poison was. Keenan saw her from the yard. She discovered that he was watching her and ran hack to her room. She has lain there on a lounge ever since her frantic deed and has taking nothing but a little water. She said this afternoon that an hour after she, had struck the blows. She realized the terrible thing she had done.

“I know Edna is dead,” she said. “She has gone to heaven, but I shall not go there.” When asked how she felt she replied. “I am distressed in my heart. The devil prompted me to this act, and now he mocks at me.” Dr. Hendrickson said he could not feel Mrs. Smith’s pulse beat. Her arms were blue to the elbows. Coroner Smith, of Red Bank, visited the home, but did not deem an inquest necessary. Judge Alfred Walling, of Keyport, made out papers to commit Mrs. Smith to the insane asylum. But the physicians said she would probably rather need a burial permit.

Dr. Hendrickson and Taylor, of Middletown; Dr. Reed, of Keyport, and Drs. Palmer and Fay, of Port Monmouth, are attending the family. Rufus was feebly conscious at times yesterday, but had no knowledge of what had happened. Bessie was conscious but suffering terribly from the three dreadful cuts on her head. Little Alida, 7 years old, had three fingers of her left hand cut off, her right wrist nearly severed, and received a deep cut over her right eye. She said yesterday to those around her that her mother had always been good to the children, and would never have hurt them if she had not been crazy.

“I know Edna has gone to heaven.” she said. “I hope mamma will go there, too.” Some of the friends at the house thought that Bessie might possibly recover. Though the physicians have no hope of such a result. The probabilities are that the three children, and perhaps their mother, will not live through to-morrow. Mrs. Smith is a pleasant-faced woman of about 45 years. Her husband is a bronzed and sturdy farmer about the same age.