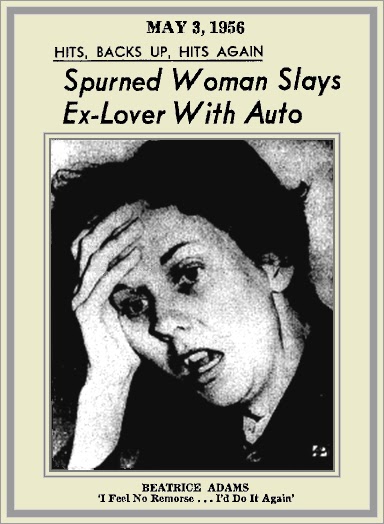 FULL TEXT: (Article 1 of 4): New Orleans – A jilted woman crushed her ex-boy friend to death Wednesday beneath the wheels of a car because, she said, “God and I are tired of men taking advantage of women.”

She did the job in the presence of another car salesman who leaped beside the moving car to rip out wires and finally bring the death vehicle to a halt.

“It was the most cold-blooded exhibition I’ve ever seen,” the salesman, Jack Holland,” said.

Jernigan died early today from injuries that included fractures of the left leg and both arms and a crushed right leg.

“I feel no remorse over having killed him,” Miss Adams said. “I’d do it again. God and I are tired of men taking advantage of women.”

Holland, the salesman who ripped the wires to stop the driver, said:

“God knows how many times she ran over Jernigan. She would hit him, back down the drive into the street and get another running start.”

“She would take off up the drive, swerve over to the body and hit it again, I mean run over it. There were tire marks all over the drive, the street, the sidewalk and the ground.”

Miss Adams said she had been married once for three weeks to a man whose name she doesn’t even know. She said he was a bigamist.

Police learned that Jernigan had had an affair with the stenographer, but that he had broken off with her and had become reconciled with his wife.

FULL TEXT (Article 2 of 4): New Orleans – Beatrice Adams, the Bible-reading woman who killed her lover by runing him down with a car, entered her eighth day of fasting in prison Wednesday.

Dr. E. A. Eigenbrood, prison doctor, said there was no evidence of malnutrition.

Miss Adams, a 35-year-old secretary, has admitted running down Jack Jernigan, 39, May 3. She ran back and forth over his body, screaming:

“Mack, you better ask God to forgive you before you die.” She said Jernigan had jilted her to return to his wife. Miss Adams was charged with murder. 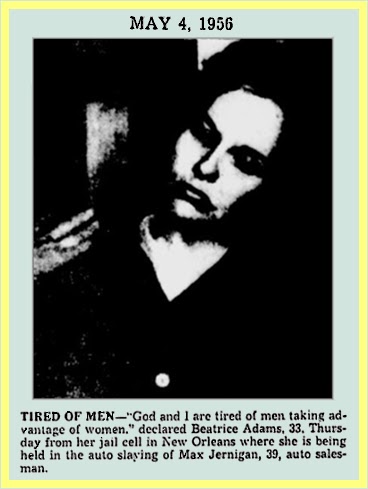 FULL TEXT (Article 3 of 4) – New Orleans, La. – A criminal district judge declared Beatrice Adams insane and therefore unable to stand trial for slaying her former lover by repeatedly running her car over his body. Judge J. Bernard Cocke committed the slim, 35-year-old former woman Marine to the East Louisiana mental hospital in Jackson. Miss Adams was charged with killing Mack Jernigan, 29-year-old car dealer, with her automobile on busy Canal St., last May as he stepped from the curb.

She drove the car back and forth over his body, urging him to ask God’s forgiveness for having abandoned her after he’d promised to marry her. At the time she told police Jernigan planned to return to his wife.

“She is a menace not only to society but to herself,” the coroner said.

Dr. Chetta described Miss Adams as a Schizoid, a person with a split personality.

Shortly after her arrest. Miss Adams told newsmen and officers “God and I are tired of men taking advantage of women.”

“Just pray to God, She will provide”

Note the partnership. It required only one further step to reach what some leaders of Women’s Lib are proclaiming today, that God is female. “Just pray to God, She will provide,” the ladies are saying. It is to be hoped that they do not mean She will indiscriminately provide male targets for their automobiles, as She allegedly did for Miss Adams.

It may seem extreme to extend the Women’s Liberation Movement into the area of homicide, but the record is crowded with relevant examples. A recent one leaps to mind, that of Andy Warhol, artist of the silver hair, blue contact lenses, leather jackets, Campbell Soup can paintings and nudie films. [This article goes on to tell the Valerie Solanas story and others. This article contains the first appearance of the term “homicidal hate-the-man syndrome.”]

EPILOGUE: “After treatment, she was found to be sane and was returned to Orleans Parish Prison in late 1959 to stand trial. On Feb. 24, 1960, the jury found her not guilty by reason of insanity. She was returned to the hospital for about a year before she was again declared sane. This time the judge released her.” [The Best of New Orleans] 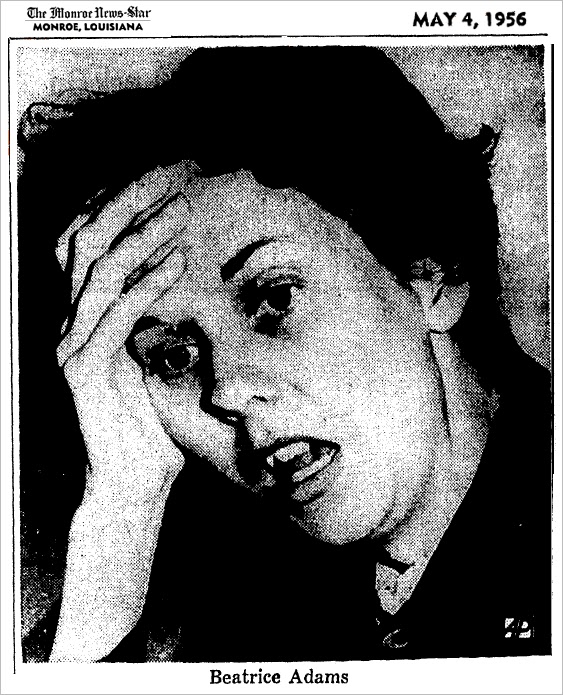