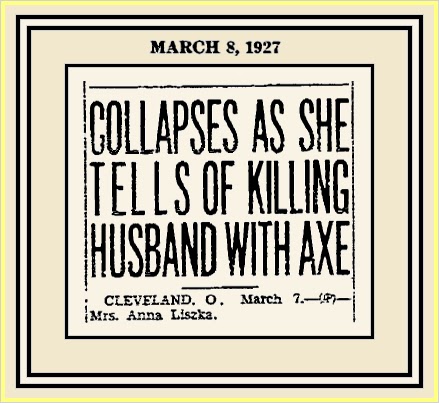 FULL TEXT (Article 1 of 2): Cleveland, O. March 7. – Mrs. Anna Liszka, on trial for manslaughter, today finished her story of how she killed her husband, Anton, with an axe on the night of Feb. 2. The jury that heard it probably will take the case by noon tomorrow. Both sides rested after she had finished and when court recessed, arguments were in progress.

The story was not easy in the telling, and the witness collapsed twice on the stand. Throughout the day she sat before the crowded court room recounting in detail years of alleged abuse that led up to the fatal night when she found the are which she believed intended for herself and with it battered out the life of the father of her three daughters.

She told of a quarrel in bed on the night of the killing and of a threat she said was made then by her husband. She had asked him to get her a drink. His response, she said, was to tell her she would “not need many more drinks.”

“I got out of bed myself and went for the drink,” she continued. “As I came back I stumbled over an axe. I knew it was for me. I got back in bed and lay there praying Then I got up and picked up the axe. For several minutes I stood beside him. I thought he was asleep. But he wasn’t. He jumped at me – and I hit him.”

As she reached the climax of her story. Mrs. Liszka’s eyes dropped to the axe resting on the floor before her, tagged as evidence.

Her shoulders swayed and she slid in the chair unconscious. For five minutes Bertha Bodell, court probation officer sought to revive her.

Then the story went on until a second collapse forced another interruption.

Her three daughters, the eldest 15 sat around the counsel table while she testified.

FULL TEXT (Article 2 of 2): Mrs. Anna Liska, who hacked her husband, Anton, to death with an axe, was sentenced Monday to an indeterminate term in the Maryville Reformatory by Common Pleas Judge Walter MacMahon at Cleveland.

Mrs. Liszka was granted a $5,000 bail pending her appeal to the court of appeals.

Judge McMahon’s action followed a report by Dr. Royal Grossman, physician for the Cuyoga county probation department, who said his examination of the woman indicated she was in good physical condition.