A Feminist Killing in Florida by Priscilla Bradford, Murder-Coaching Mom - 1980 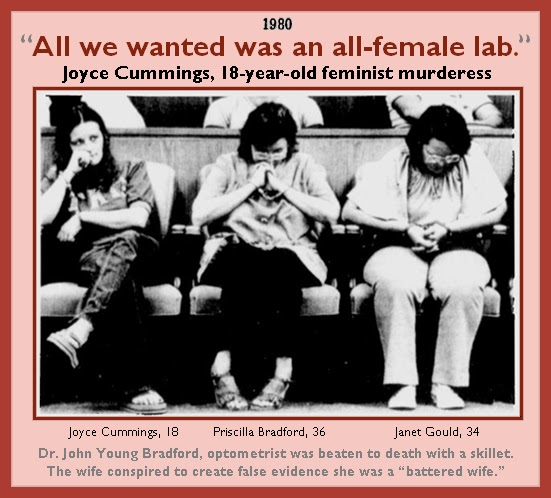 On February 23, 1980, optometrist Dr. John Young Bradford told car rental employees that someone wanted to kill him, then he quickly made out a handwritten will, asked them to sign it as witnesses, and mailed it to his lawyer. Five weeks later he was dead. Wife Priscilla Bradford and her husband’s two employees, Joyce Cummings and Janet Gould, would later reveal in testimony that they hated Dr. Bradford – and for good reason – because he represented “all men,” according to their liberationist philosophy. As the trio’s murder scheme developed, one member bought a rifle and practiced diligently, mapping out an ambush, but the plan was abandoned. In a second scenario discussed by the group they considered cutting the brake line of the doctor’s car. Later, a poisoning was tried, but the doctor noticed the bitter taste of the orange juiced (spiked with a heavy dose of amphetamines). Finally the group settled on a sure-fire plan. Mrs. Bradford visited the police with a “battered wife” story, and after her victim status was firmly established she would be free to kill her husband in “self-defense.” Dr. Bradford was dead the next day. [St. Estephe]

Following are two newspaper reports on the case, which came to be known nationally as “the frying pan murder” or “the skillet murder.”

FULL TEXT: Melbourne, Fla. – Authorities have filed first-degree murder charges against the widow, mother-in-law and two female employees of an optometrist who was beaten to death in his home with a skillet and another kitchen utensil [a bottle-capper].

But police were reluctant to discuss a motive or exactly what role they believed the four women, who were arrested Thursday, played in the March 28 death of Dr. John Young Bradford.

Priscilla Bradford, his 36-year-old widow, claimed she had been a battered wife. On March 27, the day before his death, she showed up at the police station with her face black and blue to file a complaint against him. “She had been beaten all to hell,” the officer said.

But police reports also showed that the 53-year-old doctor told friends and acquaintances that he was a battered husband and that “they” were trying to kill him.

At a hearing Friday, Mrs. Bradford, Joyce Cummings, 18, of Palm Bay, and Janice Gould, 34, Melbourne, were ordered held without bond. Cummings and Gould were lab technicians at United Optical Laboratories, owned by the Bradfords. Mrs. Bradford’s mother, Mildred Hadley, 69, of Melbourne Beach, was released on $20,000 bond.

Jake Miller, acting Melbourne police chief, refused to detail what authorities believe led to the slaying and charges or what they believe happened at the Bradford home the night of his death.

“It would appear that it was a combination of things, one of which a domestic situation that deteriorated over the years,” Miller said.

Initially, police had said only Mrs. Bradford and her 14-year-old daughter, Eden, were home at the time of the killing. Eden reportedly was taking a shower.

But later said the two employees also were in the house. He said the mother-in-law was not present during the slaying.

Mrs. Bradford claimed her husband repeatedly beat her during their 3 1/2-year marriage. Neighbor Ruth Means said police were called to the house several times during domestic squabbles over the past few months.

“I was fighting for my life. That’s all I can say,” Mrs. Bradford told the newspaper TODAY in Cocoa the day after her husband was killed.

Officials at Holmes Regional Medical Center in Melbourne said Mrs. Bradford was treated for injuries that appeared to be from a beating the night her husband was killed.

Miller said her claim of being beaten was “still being explored.”

An autopsy report showed Bradford was beaten over the head with a skillet and a heavy metal kitchen device used to recap bottles. Police refused to say whether one or both weapons dealt the fatal blows.

According to reports given to police, Bradford talked to friends about being beaten by his wife and changed his will twice in the past few years, most recently at a car rental agency in Orlando. WHAT CAME OUT AT TRIAL

On March 28, 1980, for fifteen minutes Priscilla Bradford, Joyce Cummings, Janice Gould beat their victim with a variety of instruments including a cart iron skillet and a heavy metal bottle capping gadget, but he was still alive. Then Priscilla’s daughter, Eden, was summoned to assist in the by now almost ritualistic scene.

“I saw him lying there. He was trying to breathe. It was a mess … it sounded like he was trying to say something. He was probably just gurgling. He was drowning in his blood and he started to move his hand and, well, my mother had the frying pan, which had the bottom broken out ... She was hitting him with that.” Her mother handed her the bottle capper and ordered her: “Keep hitting him – anywhere!”

Eden, in her confession related that “I, really, you know, thought, okay, it wouldn’t faze me or anything, so I took the bottle capper and hit him a couple of times, just to keep him down.”

Bradford, Gould and Cummings were sentenced to prison for life in August 1980. The 18-year-old Joyce Cummings, at trial, related the group’s motive for the crime succinctly: “All we wanted was an all female lab.”

[Source: A superb account of the case is included in Jay Robert Nash, Look for the Woman: A Narrative Encyclopedia of Female Poisoners, Kidnappers, Thieves, Extortionists, Terrorists, Swindlers and Spies From Elizabethan Times to the Present (1981, M. Evans & Co., N. Y.)] 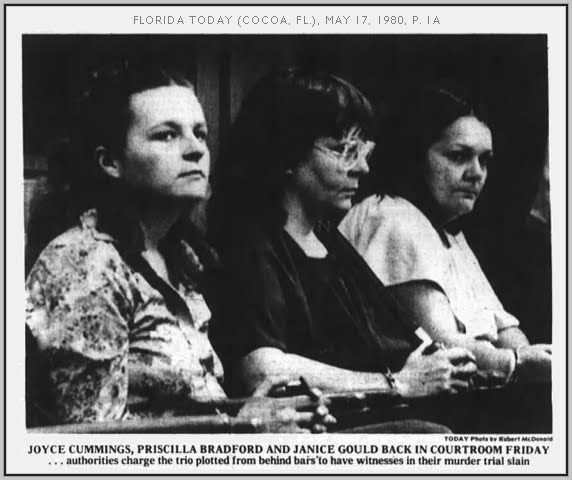