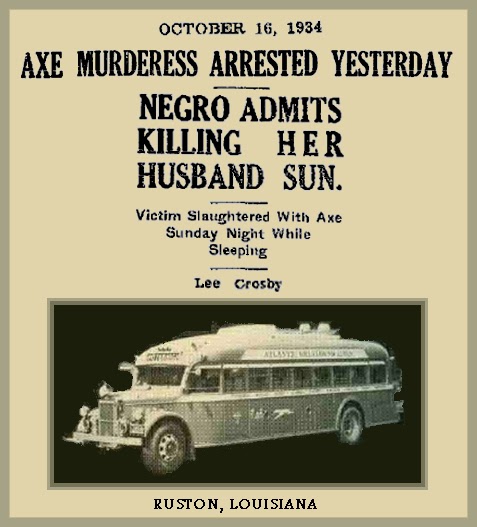 FULL TEXT: Ruston, Louisiana – Lee Crosby, a negro residing about three miles southwest of Choudrant, on the land belonging to Tobe Pipes, was killed Saturday night about midnight at the hands of his wife, Leslie Crosby. According to the negro woman who is to have made a confession the sheriff’s department, the killing took place while the victim was asleep, and the weapon used was a short, handled ax with which the Crosby woman crushed her husband's skull with two blows, either of which would have both fatal, according to Dr. M. T. Green, who made the inquest in the absence of Dr. Rutledge.

According to Deputy Clyde Frazier, L. D. Allen, a resident of Choudrant reported the event to the sheriffs department yesterday morning, and the two men, together with Deputy Legett went to the scene of the crime. They found the murdered man still lying on his cot and covered with bed clothes arid quilts. The negro woman had burned his clothes, and traces of them were found in the fireplace.

The following day after the crime, the negro woman asked two negroes who are employed by L. D. Allen to help her move some groceries, etc., from her home and to drive the car owned by the murdered man, which she could not operate.

The two negroes brought her to Choudrant in the car at her request so that she could get to Ruston and catch the bus for Shreveport. Before the departure the Crosby woman told the two negroes that she had murdered her husband, and that he had been lying on the cot covered up by bed clothes and heavy wrapping paper while they were in the house. It was these two negroes who reported the crime to Allen, who in turn notified the sheriff’s department.

The negro was brought to Ruston by an employee of Bennett's Filling Station, and according to J. E. Crawford of the local bus station, she bought a ticket to Beaumont, Texas.

Before she had time to reach Sherevesport, Sheriff Thigben notified Shrevesport authorities who arrested her as soon as the bus arrived.

The negro is alleged to have made a complete confession of the crime, and is now being held in the Parish jail pending further investigating and a possible special session of the Grand Jury.