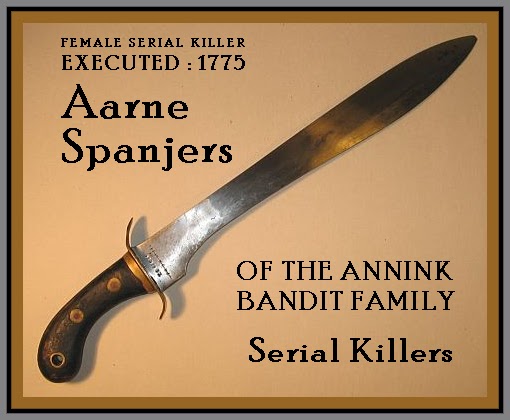 Wikipedia: Klaas Annink (June 18, 1710 – September 13, 1775), better known as Huttenkloas, was a notorious Dutch serial killer in Twente, Netherlands. Records of his life frequently mention that he was born in Bentelo.

He was reputedly responsible, together with his wife Aarne Spanjers and his son, Jannes, for numerous robberies and murders in the region in and around Hengevelde.

In 1774, a merchant from Hanover investigated and found convincing evidence that Annink was responsible for the disappearance and murder of one of his family members. Huttenkloas was then arrested and held for 114 days in a specially-made chair. Following a controversial trial, he and his wife were sentenced to death and executed. The seat in which Klaas Annink sat, known as the "Chair of Huttenkloas", is still on display in the Ancient Chamber room in the Palthehuis Museum in Oldenzaal.

Klaas Annink Executed on September 13, 1775. Sources available at this moment do not state whether Aarne Spanjers’s execution took place on that same day.