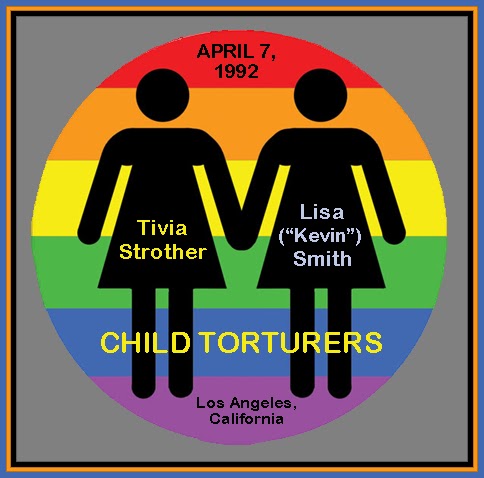 On April 5, 1992, tiny Tivia Smith, 18-months-old, weighing a meager 17 pounds (normal weight being 20.8 to 24.5), was rushed to Martin Luther King Jr./Drew Medical Center by her mother, Tivia Strother. The mother, however, first made sure she had cuts and bruises on her own body to show off at the hospital to support a concocted story that the couple, with baby, had been attacked by gang members.

The baby had apparently had been beaten into unconsciousness. She was immediately placed on a life support system, yet could not be saved and and was declared brain-dead and was removed from life support. The official cause of death was “ blunt force trauma.”

Tivia had been conceived through artificial insemination by Mrs. Stother, 22, whose partner, Lisa (“Kevin”) Smith, 24, gave the child her last name. The couple were arrested and charged with murder and torture. The pleaded not guilty. The trial was delayed until January 1995.

Prosecutors charged that the couple had beaten little Tivia “with belts, shoes and blunt objects, and tortured her with nails.” Deputy Dist. Atty. Carolyn McNary said “If you could see the pictures of this baby, I wouldn’t have to explain anything to you.”

On January 24,1995, Strother and Smith were found guilty of first-degree murder and torture, sentenced to 25 years to life in prison. Los Angeles Superior Court Judge William Pounders commented in his remarks in the sentencing of the pair that: “The child was no longer a toy they wanted to play with anymore.